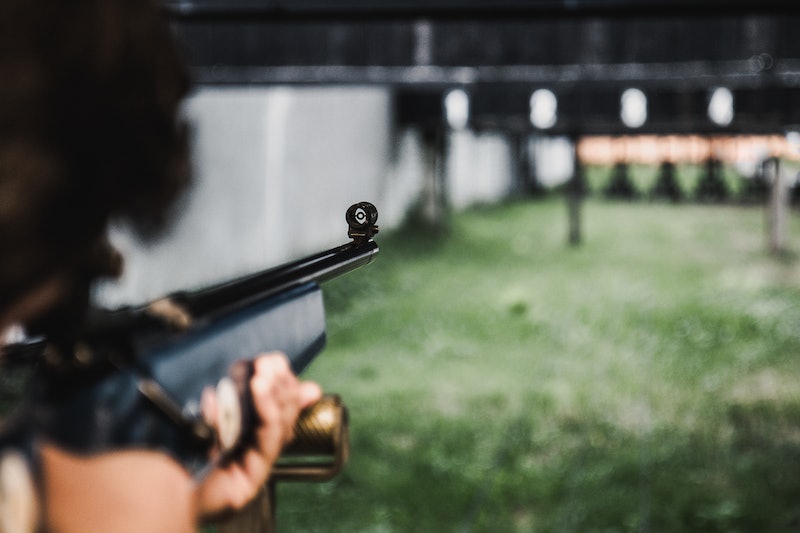 As someone who attended their first gun safety class at a young age, a huge part of me is genuinely excited that more and more Black women in Chicago are receiving concealed carry permits than ever. In a city where violence against women and girls of color has been overlooked for far too long, more than 1,300 Black women received a concealed carry license in 2017, a 67 percent increase since 2014, according to a report from the Chicago Tribune. What's more, this isn't the only city where this phenomenon is happening, either; last summer, the AP reported that there's been a marked increase in Black women owning guns across the nation.

But even as a woman who proudly knows her way around a firearm, who supports any woman who might choose to empower herself through gun ownership and gun safety classes, I don’t think I can write about women’s self-defense and gun ownership without also talking about how American gun laws endanger the lives of even the most responsible, well-trained women. The fact is, gun laws in the United States weren’t made with the safety of women in mind, and there’s no telling when lawmakers will remedy this fact.

As HuffPost reported last summer, American women are 11 times more likely to be murdered with a firearm than women in any other developed nation, and American women who experience domestic violence are five times more likely to be killed if their partner has a gun. Since there are currently 41 states where people who have been prohibited from purchasing firearms due to domestic violence charges aren’t required to relinquish the guns they already own, these disheartening statistics really aren’t all that surprising. Nor is it terribly surprising that, according to a 2016 report from the Violence Policy Center, guns were the most common weapon used to kill American women in 2014.

Still, as troubling as gun violence against women is in the United States, it’s encouraging to me that the landscape of gun ownership in America is becoming less white and male. More and more defense groups, like the Black Women’s Defense League in Dallas and Armed Empress in Atlanta are catering to Black women these days, and it’s about dang time. It’s also great to see women like Marchelle Tigner — founder of Trigger Happy Firearm Instruction in Savannah, Georgia — empowering other Black women through gun safety classes and target practice.

And what’s perhaps even more important than all of this is for Americans in general, and American gun culture specifically, to witness how women like Tigner are changing the way our society talks about Black Americans and gun ownership. As Tigner recently put it for WBUR: “Every story you see with a Black person and a firearm is a negative story. It’s about someone, you know, getting shot, or someone robbing someone, so I wanted to change that narrative and make it normal,” Tigner said. “We can exercise our Second Amendment rights just like everyone else can, and it’s not just a bad thing or making you a criminal. And I think education is key to changing that narrative.”

Tigner's right. When it comes to gun ownership and gun use, education is everything, which is why it's so amazing that more and more Black women in Chicago are receiving their concealed carry licenses. But as significant as this news may be, it's just as important that we don't stop talking about why Black women have become the fastest growing demographic of gun owners in Cook County since 2014. When it comes to violence against women, Black women in America are a vulnerable population within a vulnerable population. So though it's super exciting to see the world of gun ownership become more inclusive, it's also unsettling as hell that an entire demographic of Americans feel more protected by their firearms than their own government.