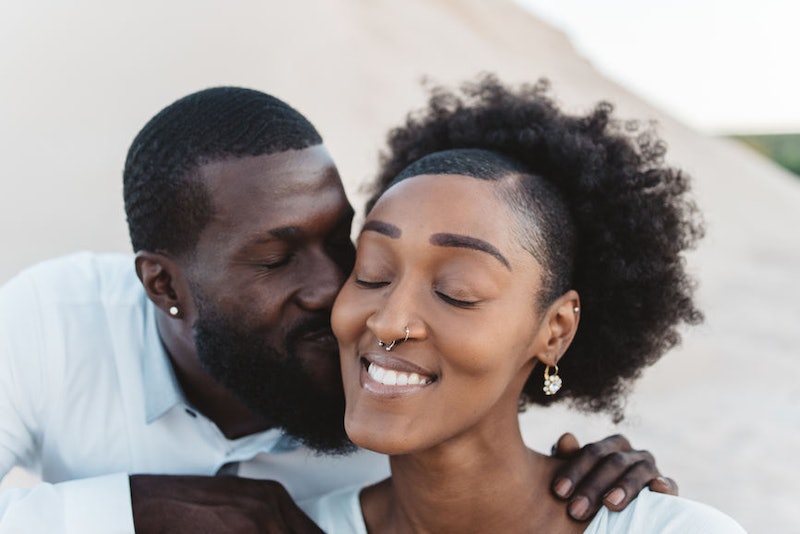 Historically, the notion of "marrying up" — aka getting hitched to someone who is better-educated, earns more than you, or both — has been something that's largely associated with women. Nowadays, though, it's actually men who are more likely to marry someone of a higher socioeconomic status than them. According to new research published in the journal Demography, there are now more highly educated, unmarried women out there in the wild than there are men of the same ilk. As a result, more men are marrying "up," while more women are marrying "down" (to less-educated, lower-paid men).

"Men 'marrying up' doesn’t surprise me given the way society has changed in the last few decades," Jonathan Bennett, dating and relationship expert at Double Trust Dating, tells Bustle. "Women are not only full participants in the workforce, but have high paying jobs. In addition, women currently comprise 56 [percent] of college students, setting them up for even greater earning power in the future."

Gone are the days when the only "career" option for women was being a homemaker: as of 2017, women comprised almost half (46.9 percent) of the workforce, according to the Bureau of Labor Statistics. Thanks to the generations of women who fought for women's right to be educated and to join the labor force, today's women are now empowered to pursue higher education, land well-paying jobs, and prioritize their careers — even over marriage and motherhood, which would've been unimaginable just mere decades ago.

More than anything else, this cultural shift acts as further confirmation that women and men are on a more level playing field than ever before in history. If men can marry "up" without feeling emasculated by their partner — and women can marry "down" without worrying about relying on a man for financial support — then that's an extremely promising sign that an even greater understanding of gender equality is just on the horizon.

But why are we so concerned with who's marrying in which direction, anyway? As Bennett says, the notion of marrying up or down is an antiquated way of looking at romance and relationships, and one that we should throw out if we want to someday achieve *true* gender equity. "I always encourage people to marry for love and shared core values, not whether or not a person represents an 'upgrade' or 'downgrade' over a current economic or social position," Bennett says.

Besides, thanks to the immense reach of social media and dating apps, meeting people from all walks of life is easier than ever — so there's no reason to limit yourself to only dating someone who's chosen the exact same life path as you. In fact, there can even be strength in socioeconomic differences within a relationship: having a partner with disparate life experiences than you — like attending trade school instead of an Ivy League, or working in a creative field versus at a high-powered desk job — can be hugely beneficial, as it allows you both to share your different perspectives and experiences, and grow and learn together from them.

Ultimately, the best relationships are those in which both parties are equal partners, working together as a team to tackle life and all of its obstacles. In a healthy relationship, there should be no talk of which partner is "better" than the other; you should both acknowledge one another's strengths and feel confident in what you're bringing to the table — regardless of your socioeconomic background. As long as your relationship is built on a foundation of mutual respect and love, the gender of the breadwinner in your relationship should be irrelevant.