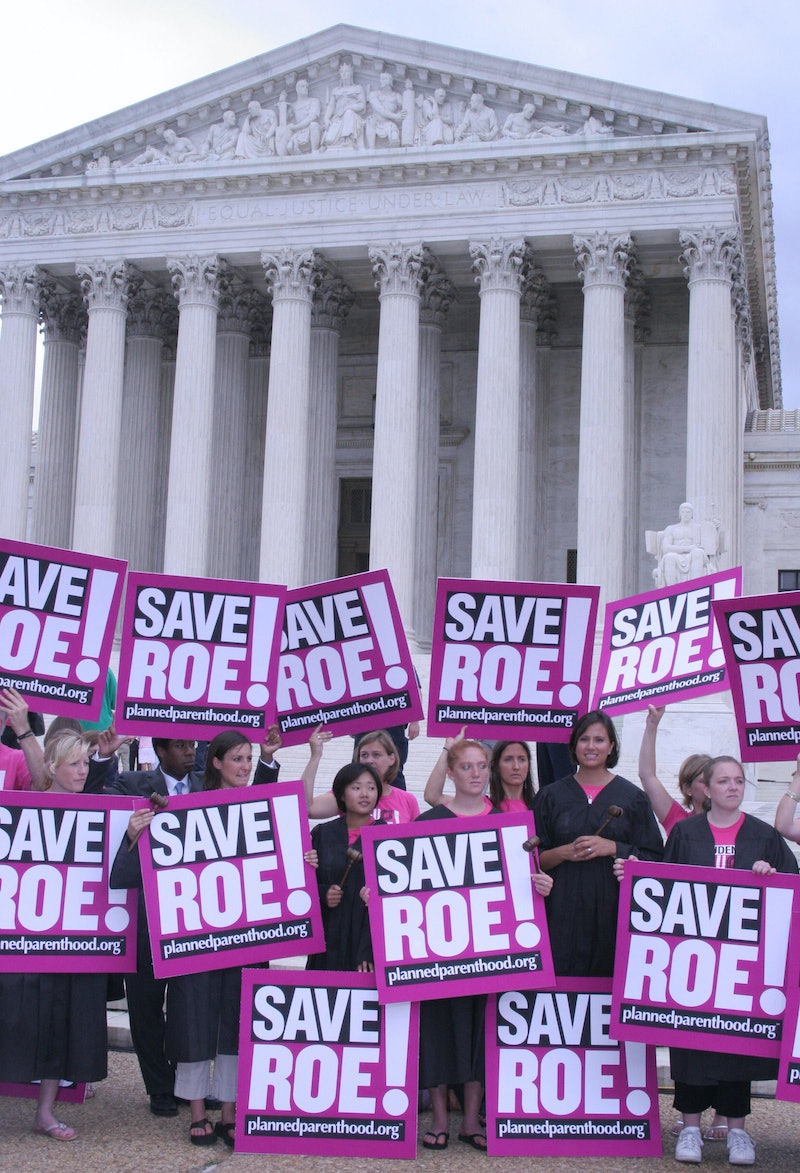 2016 may have been a tough year for reproductive rights, but 2017 is already off to a better start. According to a Pew Research Center study published on Tuesday, nearly 70 percent of Americans oppose overturning Roe v. Wade, the historic Supreme Court case establishing the right to an abortion in the first trimester of pregnancy. Contrary to what you may think, opinions on Roe v. Wade have generally been stable over time; polls show that since the '70s, around half of Americans support the legality of abortion under certain circumstances. (About a quarter support the extremes — abortion under any circumstance or banning it altogether.) However, the results of Pew's survey represent the highest support for the Supreme Court case in decades.

Conducted in early December, the poll found that 69 percent of Americans support Roe v. Wade, while 28 percent want it to be overturned. As always, opinions tend to follow partisan lines: 84 percent of Democrats are supporters — a number that's up 18 percentage points from 1992 — compared to 53 percent of Republicans. Moderate and liberal Republicans were more likely to support the case, with just 27 percent saying they wanted to see it overturned.

According to the poll, religious affiliation and education heavily influenced opinions as well. People with higher levels of education, particularly postgraduate degrees, were more likely to support the ruling. Those with a religious affiliation, in contrast, were more likely to want it overturned than nonreligious people. White evangelical Protestants were split almost evenly, with 49 percent supporting Roe v. Wade and 47 percent supporting its repeal.

When Pew asked the same questions in a 2013 poll — incidentally, the same year as the 40th anniversary of Roe v. Wade — the case had fewer supporters (63 percent) and about the same number of detractors (29 percent). In a 2003 poll by Gallup, just 53 percent of respondents said the case was good for the country. Surveys about attitudes toward the case in the '70s and '80s are scarce, but it's possible that this is the highest support for Roe v. Wade since it was decided in 1973. It's certainly the highest of any Pew Research Center poll.

However, this doesn't mean the majority of Americans want unfettered access to abortion. As The Atlantic pointed out, it's a complex issue. While most people may agree that abortion shouldn't be totally legal, they tend to support some sort of restrictions on the procedure. For instance, according to a Gallup poll conducted most recently in 2011, a little more than 70 percent of Americans favored a law requiring women under 18 to get parental consent for abortions of any kind. The same poll found that 75 percent of respondents supported abortion in the event of a pregnancy caused by sexual assault or incest.

Gallup has conducted this poll numerous times over the years, and attitudes tend to remain steady. Recently, the most notable change was a rise in people with no opinion on the subject, which researchers attributed to young adults growing up in the post-Roe v. Wade era. "[This result] suggests that the generation born entirely after Roe became law has had less exposure to information about the decision than those who lived through the original decision, or were at least old enough to witness some of the major abortion debates during the 1980s and '90s," researchers wrote in 2013.

All this is what makes the Pew Research Center's survey such a breath of fresh air. Despite recent attempts to pass legislation heavily restricting abortion in certain states, such as Ohio's draconian heartbeat bill, almost seven in 10 Americans support the right to choose.

Unfortunately, the administration of Donald Trump doesn't appear to share this opinion. The president-elect has consistently courted anti-abortion activists, and in the third presidential debate, he claimed that if he was elected, Roe v. Wade would be overturned "automatically." Furthermore, his shortlist of potential Supreme Court nominees includes a man who called the case an "abomination."

Clearly, it's more important than ever for pro-choice voters to make their support of Roe v. Wade known. The best way to start is through contacting local representatives. Fortunately, you're in good company.