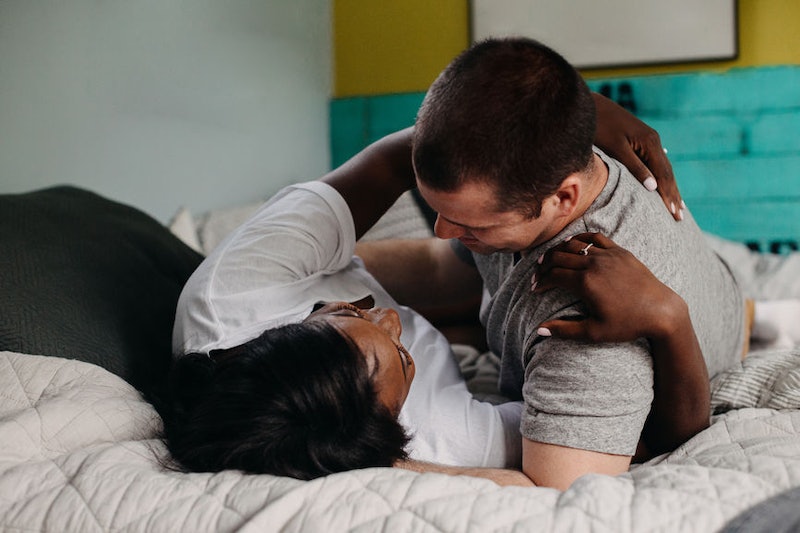 With 2017 just around the corner, many people probably have their New Year’s resolutions in mind. Some may want to get in shape, others may want a better job, but as it turns out, a majority of women also have sex goals they intend to reach in the new year. According to a new survey conducted by reproductive health app Kindara, 71 percent of women say they want to have more sex in 2017.

Kindara surveyed 1,309 women on their New Year’s resolutions. While the majority of women surveyed said they wanted to have more sex in 2017, the numbers this year are significantly up from the 53 percent of women who said they wanted more sex last year. It looks like they want to start the new year right, as 69 percent say they plan on having sex this New Year’s Eve. But women don’t just want quantity. They’re also looking for quality. As the survey found, 56 percent say they want better and more “adventurous” (46 percent) sex in the new year.

“I believe that as women learn more about their cycles, they become more in-tune and confident with their bodies,” Raychel Muenke Ph.D., EVP of Kindara tells Bustle. “This confidence could be a reason more women are speaking up to say they want more sex (and more adventurous sex). Now more than ever before women are being more vocal about what they want!”

But having more adventurous sex doesn’t have to mean you have to get all-out kinky, if that's not what you're into. “The easiest way to have more adventurous sex in the New Year is to commit to learning three new things: one new thing that turns you on, one new thing that turns your partner on and one new way to take what you were already doing to the next level,” Spirit, a licensed professional sex and relationships therapist and owner of the private practice T2S Enterprises, LLC, tells Bustle. “Think, ‘me,’ ‘them,’ and ‘us!’”

If you’re looking to have a more adventurous sex life in 2017, here are some easy ways to do it:

1. Sharpen Up On Old Skills

If you’re into oral sex, Spirit suggests that you may want to consider taking an oral sex workshop. “If you’re lucky enough to live in a major city, you can likely find a cunnilingus/fellatio class to attend in person," Spirit says. "In areas where there aren't any available, you can also consider attending an online session.”

2. Get Adventurous With Location

Take it out of the bedroom by starting in different parts of the house like the kitchen, the backyard, or your car inside the garage. “The key is to focus on tapping into the excitement that comes from all of the new sights, sounds, etc. that come from the new environment," Spirit says.

“Being highly intuitive works wonders for being a great and adventurous lover,” Dr. Mike Dow, psychotherapist and New York Times best-selling author of The Brain Fog Fix, tells Bustle. Communication is an important key to having good sex. We communicate by what we say and do. According to Dow, while the bedroom is a great place for verbal communication, many times people don’t want to spell out every little thing in bed.

“Make an effort to notice every nonverbal cue you see or hear and use nonverbal communication yourself. Notice when your partner moans, pay close attention to the face and see when the eyes close. Notice when their toes curl or see evidence that they just got chills up their spine with goosebumps,” Dow says. “While you're at it, make these nonverbal clues more evident so your partner can do the same thing.”

If you use your intuition, you might find the experience to be much more exciting.

Another easy way to be more adventurous is to take charge. “Being assertive works wonders,” Dow says. “This is why men puff up their chests when they're near a woman they find attractive.” This means, ask for what you want using positive and specific language.

Instead of saying, “I like it when you…” take it one step further and make it even MORE positive, i.e. “It drives me absolutely crazy when you… with your…” Dow suggests.

The best sex positions you can do are the ones you haven't tried yet. Dow says that the more positions used during sex, the more likely you are to have an orgasm — so try experimenting.

If spicing up your sex life is at the top of your to-do- list, just remember that you don't have to do anything too intimidating. Starting small by changing up a favorite sex position can easily make things exciting. Then you can expand from there. So here's to a fun-filled, sexy 2017!