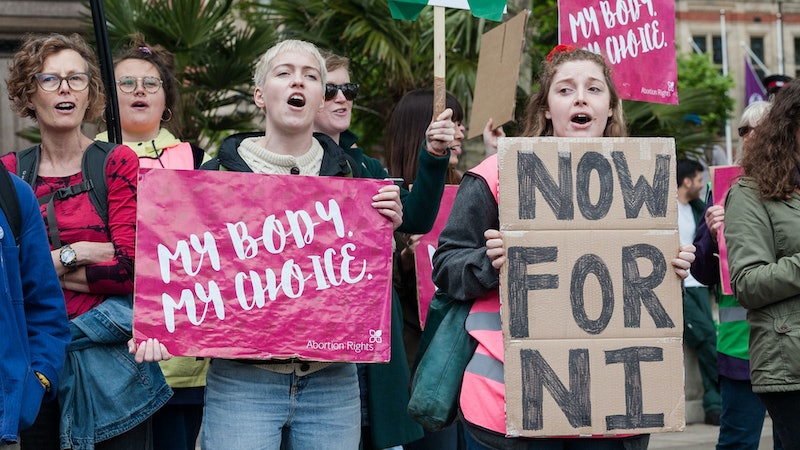 Right now, it is still illegal for people in Northern Ireland to have an abortion — unless in extreme health circumstances. Save for allowing people to travel to England for an abortion on the NHS, Westminster has so far failed to alter the situation. It says that abortion is a devolved power, meaning it is up to the Northern Irish Assembly to change the law. But campaigners have argued that, since the assembly hasn't been functional since 2017, it is Westminster's responsibility to start making progress. Thanks to campaigning efforts, MPs will now be voting on Northern Ireland's abortion legislation on Tuesday, July 9.

The vote is being led by Labour MP Stella Creasy. She recently tabled an amendment supported by up to 60 politicians from a variety of parties, reports the Guardian. If passed, it could extend the 1967 Abortion Act which legalised abortion in Great Britain up to 24 weeks into pregnancy. (Currently, Northern Ireland is still bound by the Victorian-era 1861 Offences Against the Person Act.)

It has two parts. Amendment NC11, if passed, would require the government to report to Parliament its actions to ensure compliance with the Convention on the Elimination of all Forms of Discrimination Against Women (CEDAW). And amendment NC12 "would require the secretary of state for Northern Ireland to take action in the absence of ministers to ensure compliance with human rights obligations on abortion in Northern Ireland," states the British Pregnancy Advisory Service (BPAS).

“According to the [United Nations], women in Northern Ireland face ‘grave and systematic’ human rights violations because we treat them as second class citizens and deny them their basic human right not to be forced to continue an unwanted pregnancy," Creasy said in a statement.

“With women facing jail now in Northern Ireland and no sign of an assembly anytime soon at Stormont [Northern Irish parliament], this vote is a chance for Parliament to uphold our human rights obligations and treat every woman in the UK with equal respect by ensuring they can access a safe, legal, and local abortion if they want to do so.”

To encourage MPs to participate in the vote and make the right choice, the BPAS is asking people to email their local representative. The organisation has done all of the hard work, setting up a service that allows an email to be automatically sent. All you have to do is enter your postcode and a few personal details.

Creasy has tried a similar move before. In October 2018, 80 MPs signed her amendment to hold the Northern Ireland secretary of state, Karen Bradley, accountable. It was passed via a vote, reports Buzzfeed, but no action was taken. But this vote comes at a different time in politics — a time where a new Conservative leader is being chosen.

Unfortunately, the two final candidates — Boris Johnson and Jeremy Hunt — don't seem to be willing to uphold human rights in Northern Ireland. As the Guardian reports, both have said the nation's abortion legislation should remain a devolved matter for Northern Ireland to decide.

But some of their own MPs believe Westminster needs to step in. Penny Mordaunt, defence secretary and minister for women and equalities, told BBC Radio 4 the "paucity of care that women have endured in Northern Ireland is the most appalling thing and it must change."

She referred to an ongoing court case that could rule current legislation as being incompatible with an individual's human rights. It was brought by Sarah Ewart, a woman who was forced to travel to England for an abortion after receiving a fatal foetal abnormality diagnosis, reports the Belfast Telegraph.

"If we have this ruling by the court, I think government will act," Mordaunt continued. "Certainly that has been the indication from the Northern Ireland office. But if government did not [the Prime Minister and ministers chosen by them to have specific jobs], Parliament [other elected MPs] would, and clearly all members of Parliament, including prime ministers, would have a free vote in that.”

Creasy's amendment could push abortion legislation further up the agenda. But if that results in no progress, campaign groups will have to keep fighting. The London-Irish Abortion Rights Campaign has already announced it is planning to take the government to court.

Writing for HuffPost, co-founder Cara Sanquest said: "We have marched, we have protested. We have written to our MPs, we have tweeted, we have chanted. We’ve been ignored by the UK government. We’ve been told that it’s a devolved matter. We’ve been told now is not the right time. We’ve been told to wait." Adding that waiting means "risking our lives and our health," she proved why the organisation needs people to donate whatever they can to help with legal costs.

A crowdfunder has been set up in aid of the organisation's legal fees. So far, over £16,000 has been raised. Any money that is not used for the case will be donated to the Abortion Support Network, which helps people who need to travel abroad for the procedure.

If you dream of a future where everyone in the UK enjoys equal rights when it comes to abortion, email your MP, donate to the legal campaign, and raise awareness of the situation whenever and wherever you can.

More like this
How To Fight For Reproductive Rights, Based On How Much Time You Have
By Courtney Young
5 Ways To Stand In Solidarity With Women In America From The UK
By Sophie McEvoy
The UK Abortion Laws In 2022, Explained
By Sophie McEvoy
Boris Johnson’s Leadership Is In Question – Again
By Bustle UK
Get The Very Best Of Bustle/UK