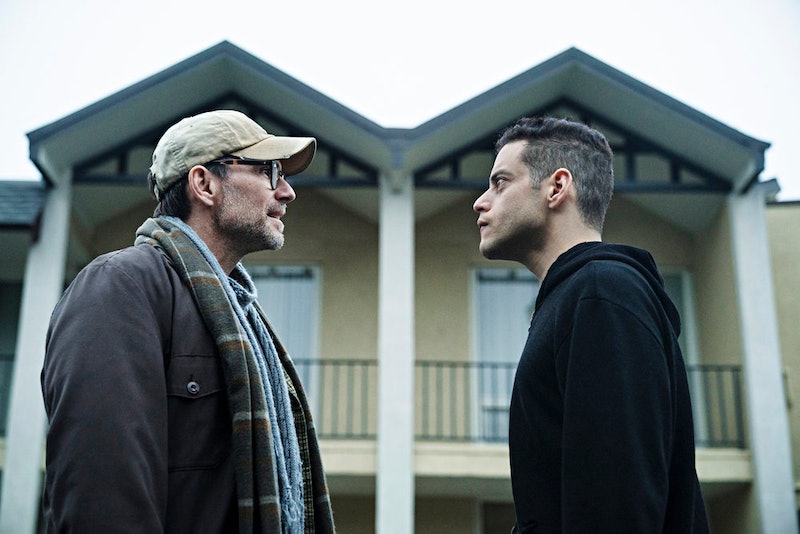 Spoilers ahead for Mr. Robot. Elliot finally got to experience what Whiterose's machine was all about in the last 20 minutes of the penultimate episode of Mr. Robot. But plenty of questions still remain ahead of the two-part finale on Dec. 22. As Mr. Robot won't return for another season, creator Sam Esmail has just two hours of television to answer if Whiterose's parallel universe is real, what the status of the "real" world is, who the third personality is, and where all of this will leave Elliot. While that feels — and is — rather ambitious, Esmail has known the ending of Mr. Robot for years and so it should all come to a satisfying conclusion befit a movie.

Besides Elliot experiencing migraines, the occasional New York City earthquake, and the boring nature of his everyday life, things appear pretty idyllic in Whiterose's alternate reality. He doesn't struggle with addiction or mental illness. He's the BMOC ("big man on campus") of Allsafe. He has a healthy relationship with his father. And he's about to marry Angela, who is still alive. Tyrell is also still alive in this universe and runs the benevolent F Corp while Whiterose is a philanthropist and living as her true identity.

If all of this seems too good to be true, it most assuredly is, as indicated by the hoodie-wearing Elliot of the real world crashing into parallel Elliot's apartment in the final scene of the episode. And these two Elliots facing off will come to a head in the series finale.

On The Hollywood Reporter podcast Series Regular, Esmail explained how he decided on the ending of the series. While he and the writers were under the assumption they would do five seasons of television, that changed once in the writers' room for Season 4. "We always knew what the last two episodes would be," Esmail said. So he placed the two final episodes on the writers' board and they worked backward from there and decided they only needed 11 other episodes to finish Elliot's story.

Esmail "always knew" how Mr. Robot would end because he had initially wrote the script as a feature-length movie — something that the filmmaker has shared since the outset of the USA show. He told Series Regular that "the themes and the specific ending" of Mr. Robot is how he pictured ending the film version. But by extending the two-hour movie into a four-season show, Esmail was able to develop more characters around Elliot whom he connects with. "In a lot of ways, even though the ending is the same, I think his journey is going to be much deeper and more satisfying because of the other characters circling him," Esmail said.

Of course, Esmail isn't going to reveal what that ending is until the finale airs. But knowing he adapted a two-hour film into some 45-hours of television is pretty definitive proof that his ending has been well-thought-out and very purposefully planned. So while fans can expect many twists and turns in the last two hours of Mr. Robot, feel as secure as possible in the world established by Esmail that it will be a fitting farewell to Elliot worthy of saying, "Goodbye, friend."