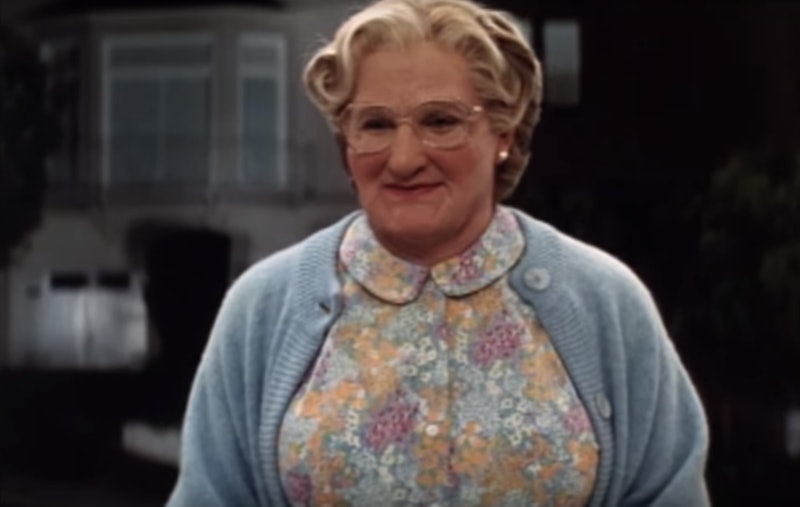 If Mrs. Doubtfire is one of your favorite '90s movies, you'll be thrilled about this news. The classic movie, based on Anne Fine's novel Madame Doubtfire, is being adapted into a musical, Entertainment Weekly reported. And if a Mrs. Doubtfire musical makes it to Broadway, there's no telling what hijinks could ensue.

Robin Williams starred in the 1993 movie, and his legacy continues to live on long after his death. Williams played Daniel, a man who wanted to spend more time with his children during a custody battle with his soon-to-be ex-wife, Miranda. Daniel decides to adapt the persona of Mrs. Doubtfire so that he can be the children's nanny — and somehow, Miranda and the kids don't see through the act.

The movie is extremely sweet, if not entirely far-fetched, which actually makes it pretty perfect for a musical adaptation. There could be slower songs where Daniel longs for the days of his family all being together. There could even be a love song between Miranda and her boyfriend Stu. And, of course, there has to be a huge cleaning dance number featuring Mrs. Doubtfire and her trusty vacuum and broom. (Although, no one will ever capture the pure joy of the montage quite as perfectly as Williams did.)

According to EW, the new musical will be directed by Jerry Zaks, who has won four Tony Awards. John O'Farrell and Karey Kirkpatrick, who were nominated for a Tony for writing Something Rotten!, will write the book for the musical, and Karey and Wayne Kirkpatrick will write the songs, Deadline reported.

As EW points out, rumors about a potential Mrs. Doubtfire musical have been circling the entertainment industry for years. But now, it sounds like the musical is actually going to happen. And plenty of fans who grew up watching the movie will likely be thrilled to see the antics play out on stage. And some fans are already noting their dream castings for the musical.

There is some concern on Twitter that elements of the film may not translate well to the modern era. It has been 15 years since Mrs. Doubtfire was released, so hopefully, the new musical will include some updates for today's sensibilities. The musical sounds like it will be all in good fun, but it could definitely do without some of the gender stereotypes from the original movie. (Yes, Mrs. Doubtfire burning her costume over the stove is funny — but why didn't Daniel bother learning to cook or clean before his marriage fell apart?) Hopefully, the new Broadway show will include revisions that allow it to appeal to all audiences, while still retaining the fun of the original movie.

And if Mrs. Doubtfire seems like a strange Broadway choice, it's not actually that weird. Other cult-favorite movies — like Pretty Woman, Mean Girls, Groundhog Day, and School of Rock — have become Broadway shows, too, so why not Mrs. Doubtfire next? The nostalgia is definitely there, and it will probably only increase as more details about the musical are revealed.