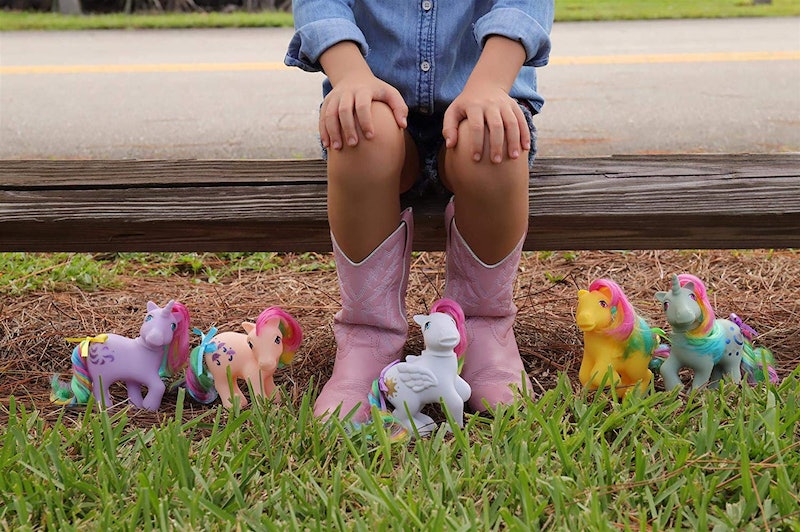 If you’re an ‘80s baby like myself, here’s something that will probably make you feel super nostalgic and really old: My Little Pony marked its 35th anniversary this year. And hey, guess what? You can celebrate in an appropriately throwback fashion, if that’s your jam: Toy company Basic Fun’s My Little Pony Retro line has brought back the Ponies of the 1980s in all their colorful — and, in many cases — sparkly glory. 30-somethings may not have a practical need for a set of toys that mimics the things we played with as kids… but that doesn’t make them any less crave-worthy. If you’re still looking for the perfect holiday gift for your favorite nostalgia enthusiast, this might be it.

My Little Pony’s precursor, My Pretty Pony, was originally released in 1981 as part of Hasbro’s Romper Room line. Designed by illustrator Bonnie Zacherle, My Pretty Pony was much larger than its sibling would eventually be; it was a whopping 10 inches in size. A few years later, however, Zacherle moved from Romper Room to Hasbro proper — and My Pretty Pony made the move as well. There were, however, a few modifications: The toys were shrunk down in size and renamed My Little Pony. The changes proved to be good ideas, though, and the 1983 My Little Pony release soon became substantially more popular than its earlier counterpart. Meanwhile, the first MLP media tie-in — the television special known alternately as My Little Pony, Rescue From Midnight Castle, and Firefly’s Adventure — was released in 1984, kicking off a long history of interconnected toys and television series that continues to this very day.

The Ponies have undergone a few redesigns since their first appearance, including the 2010 revamp that resulted in the massively successful My Little Pony: Friendship Is Magic franchise — but for kids who grew up in the ‘80s, nothing beats the OG figures. And that’s exactly what Basic Fun has given us with My Little Pony Retro: Faithful reproductions of the most notable Ponies from the 1983 line. It’s the perfect celebration for the long-running favorite’s 35th birthday.

According to exhaustive MLP fan site MLP Merch, the My Little Pony Retro line has been released in waves throughout 2018. The first wave, called the Collector Ponies, includes Blossom, Blue Belle, Butterscotch, Cotton Candy, Minty, and Snuzzle; it hit select retailers early in the year (MLP Merch spotted these six Ponies at Target in February). The second wave hit in July, bringing us six Rainbow Ponies — Skydancer, Moonstone, Starshine, Windy, Sunlight, and Parasol — as well as the Pretty Parlor Playset featuring Peachy. And just a month later, the third wave, the Unicorn & Pegasus Collection, was spotted at Target, adding Glory, Moondancer, Sunbeam, Twilight, Firefly, and Medley to the mix.

So: Where can you get these magical nostalgia-inducers? Good news: They’re available at a few major retailers, according to Basic Fun, including some online shops. Here are your options:

Walmart’s website currently has three My Little Pony Retro items in stock: Blossom, the Pretty Parlor Playset, and the Gift Set, which features five of the Rainbow Ponies (absent is Sunlight). I’m not totally sure why the full collection isn’t available, but hey, some Ponies are better than no Ponies, right? Prices run from $11.72 for Blossom and $49.99 for the pack of five.

Available at Target, we have Sunbeam, Medley, and Skydancer for $9.99 each, as well as the Pretty Parlor Playset for $17.99. For what it’s worth, there are listings for some of the other toys if you navigate in from a backdoor — for example, here’s a page for the unicorn Glory — but the toys themselves are typically unavailable, either in store or shipped.

Well, Canadians, I have good news and bad news: The good news is that Indigo did carry the My Little Pony Retro line. The bad news is that they’re mostly sold out now. You can, however, request to be notified when they’re back in stock, so at least there’s that. The figures are all $17.99 CAD each, or just shy of $13.50 USD.

Perhaps unsurprisingly, Amazon has the widest selection of My Little Pony Retro figures available: Listed in Basic Fun’s own Amazon shop are all of the Collector Ponies, all of the Rainbow Ponies, and the Pretty Parlor Playset. The individual Ponies vary in prices; at the time of this writing, the cheapest is Blossom at $11.72, while the most expensive is Windy at about $22. The Pretty Parlor Playset is $17.95.

A few of the other Ponies — namely those from the Unicorn & Pegasus Collection — can be found via third-party sellers, but they’re a bit expensive; also, it’s also worth vetting third-party sellers carefully, especially on Amazon.

It’s worth noting that the Unicorn & Pegasus Ponies are the hardest to find; the lack of listings, plus the fact that they’re absent from Basic Fun’s website, suggests they made not have received a wider release yet. Regardless, though, the fact that the throwback Ponies exist at all is notable — so if you’ll excuse me, I, uh, have some shopping to do. Some extremely magical shopping. Heck, and yes.

More like this
The 'Kenan & Kel' Reunion On 'SNL' Took A Dramatic Turn, Thanks To Keke Palmer
By Brad Witter
The First Trailer For 'That '90s Show' Includes So Many Nods To The Original Series
By Jack Irvin, Alyssa Lapid and Grace Wehniainen
How The Thanksgiving Episode Of 'Gossip Girl' Changed Pop Culture History
By Gabrielle Bondi
TikTok Is Obsessed With Dolly Parton’s Houseware Line
By Alexis Morillo
Get Even More From Bustle — Sign Up For The Newsletter