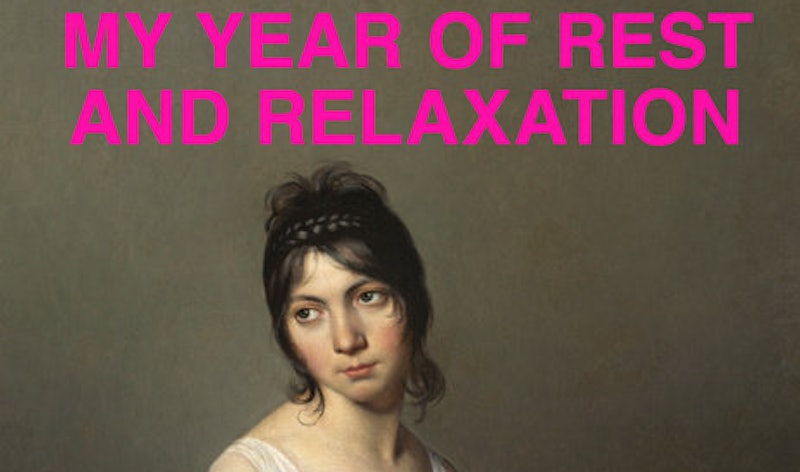 In 2018, who among us hasn't dreamed of signing off, checking out, and hibernating for a while? Between the constant breaking news and the devastating, often terrifying stories out of Hollywood, Washington, the border, and everywhere in between, the appeal of hiding from the world and napping forever is almost too tempting to resist. Almost. Everyday, activists and average citizens around the world stand up for what they believe in, fighting for those who cannot, and working tirelessly to make a better world for themselves and others. But in My Year of Rest and Relaxation, Ottessa Moshfegh's new novel set in New York circa 2000, the appeal of sleeping through the horrors of the everyday is so great for the novel's unnamed narrator that she actually decides to do it. What follows is a darkly comic yet penetrating story about pain, destruction, and human connection.

“Oh, sleep. Nothing else could ever bring me such pleasure, such freedom, the power to feel and move and think and imagine, safe from the miseries of my waking consciousness," says the narrator of My Year of Rest and Relaxation. A beautiful 20-something year old young woman living on Manhattan's Upper East Side, the narrator is so desperate to escape the grief over losing her parents, the boredom of her gallery job, and the banality of her relationships with her on-again, off-again boyfriend and her best friend that she embarks on a year-long "hibernation." She isn't trying to kill herself, or so she explains. Her plan "was the opposite of suicide. My hibernation was self-preservational. I thought it was going to save my life."

Depressed and perpetually drowsy, the young woman wants nothing more than to sleep her life away, but to readers, it isn't exactly clear why. At least, not right away. A gorgeous young woman who describes her own appearance as that of an "off-duty model," she is wealthy and able to afford a very comfortable lifestyle despite working a low paying job at a hip art gallery in the city. But behind her seemingly simple life — one that her only friend Reva perpetually expresses jealousy over — is plenty of heartbreak and trauma. Her parents, who died just months apart during the young woman's junior year at Columbia, were cold and emotionally distant throughout her childhood. Her own dreams of becoming an artist seemed to die before they even had a chance to live. Her much older boyfriend, who prefers oral sex to real intimacy, only dates her in between serious relationships.

My Year of Rest and Relaxation by Ottessa Moshfegh, $16, Amazon

Tired of being tortured by her memories and her constant negativity, the book's narrator is convinced the only cure lies in sleep. A lot of sleep. That is how she meets quack psychiatrist Dr. Tuttle, who eagerly hands over a fistful of pharmaceutical samples and prescriptions:

"'Don’t fill them all at once,'" Dr. Tuttle tells the young woman. "'We need to stagger them so as not to raise any red flags.' She got up stiffly and opened a wooden cabinet full of samples, flicked sample packets of pills out onto the desk. 'I’ll give you a paper bag for discretion,' she said. 'Fill the lithium and Haldol prescriptions first. It’s good to get your case going with a bang. That way later on, if we need to try out some wackier stuff, your insurance company won’t be surprised.'"

A comical but menacing figure, Dr. Tuttle is all-too-ready to help the young woman access pills, but seemingly unwilling — or, more likely, unable — to actually help her work through her mental health issues. The psychiatrist can't remember things the young woman tells her about her past or why she wants to be on medication, and eventually, she doesn't even require her to come into the office for visits. A shocking, if not unbelievable situation, the young woman's ability to so easily access dozens of medications is just one of the many signs of her outrageous privilege, one granted to her largely because of her looks, her wealth, and her education.

Another is her relationship with Reva, her former college roommate and only real friend, if you can call her that. A tragically optimistic figure, Reva is obsessed with personal growth and self-improvement. When she isn't busy trying to get ahead at work or slim down at the gym, she's reading Cosmo articles about how to better attract a man or dropping in to visit the book's narrator, who is never not annoyed by her presence:

“I loved Reva, but I didn’t like her anymore," the young woman explains. "We’d been friends since college, long enough that all we had left in common was our history together, a complex circuit of resentment, memory, jealousy, denial, and a few dresses I let Reva borrow, which she’d promised to dry clean and return but never did.”

Yet Reva stays by her side, and continues to check on her, and even attempts to convince her to stop, during her year of hibernation.

Of course, nothing Reva says or does works, and the young woman continues on her journey towards nearly constant sleep. But it isn't hard to see the appeal of her sleep cure, to dream of an entire year of rest and relaxation in which the only person you have to worry about is yourself. That is, until you see it unfold before your eyes and begin to realize how quickly dreams can turn into nightmares.

Moshfegh's piercing prose strips away any of the romanticism of this kind of hibernation, and the further readers (or at least, this reader) go down the young woman's determined path to let go, the tighter they will feel themselves holding onto their own realities and, more specifically, everyone they love in it.