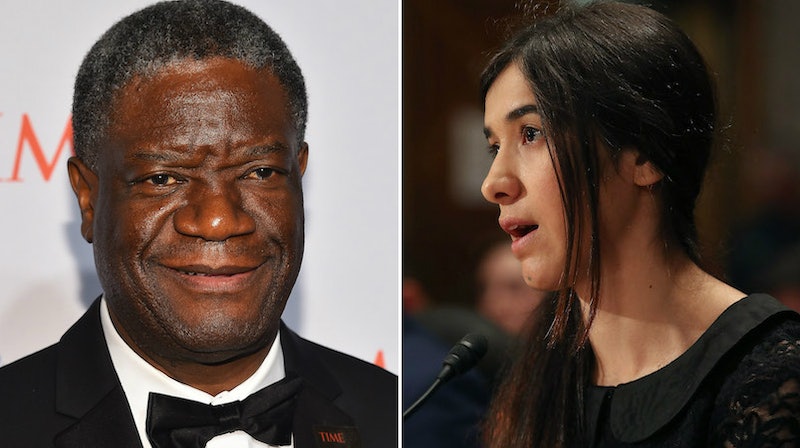 There is some hope in such a dark world. On Friday morning, Nadia Murad and Denis Mukwege won the Nobel Peace Prize. Both Mukwege, a Congolese gynecological surgeon, and Murad, a Yazidi woman who has spoken out about her rape and abduction at the hands of the Islamic State, are working to end the use of rape and sexual violence as a weapon of war and armed conflict.

"We want to send out a message of awareness that women, who constitute half of the population in most communities, actually are used as a weapon of war, and that they need protection and that the perpetrators have to be prosecuted and held responsible for their actions," Norwegian Nobel Committee Chairwoman Berit Reiss-Andersen said, according to The New York Times.

Mukwege runs the Panzi Hospital in Bukavu, a city in the eastern part of Democratic Republic of the Congo (DRC), according to Reuters. He treats everyone from children to the elderly, dealing with the effects of sexual violence. CNN reported that it's estimated that more than 200,000 women in DRC are rape survivors. A documentary dubbed Mukwege as "the man who mends women." Reuters reported that Mukwege was in surgery when he learned of the award.

"Each of them in their own way has helped to give greater visibility to war-time sexual violence, so that the perpetrators can be held accountable for their actions," the committee's decision read.

"She refused to accept the social codes that require women to remain silent and ashamed of the abuses to which they have been subjected," the committee wrote in its decision to award the prize to Murad and Mukwege. "She has shown uncommon courage in recounting her own sufferings and speaking up on behalf of other victims."

In 2015 at United Nations Security Council, Murad spoke about the abduction and mass rape at the hands of the Islamic State. She was 21, according to a Reuters report from that December chronicling her speech.

"Rape was used to destroy women and girls, and to guarantee that these women could never lead a normal life again," Murad said.

In her speech to the Security Council's first meeting on human trafficking, Murad described the rapes and beating she experienced at the hands of the men who kidnapped her and thousands of Yazidi women, as well as the deaths of many of her brothers. "Islamic State has made Yazidi women into flesh to be trafficked in," she told the council.

Mukwege was near the end of his second operation of the day, he said in an interview published on The Nobel Prize Twitter account on Friday morning. "I can see in the faces of many women how they are happy to be recognized," he said.

The International Campaign to Abolish Nuclear Weapons, which won the prize in 2017, offered its congratulations to the winners on Friday.

"Dr. Denis Mukwege and Nadia Murad have been given a great platform by recognizing the importance of preventing sexual violence against women, as ICAN found the year since winning the Nobel to be a watershed one for nuclear disarmament thanks to the doors the Nobel Peace Prize opened and the focus it gave to our important issue," its statement read. "We found that when we act together in shared humanity, the human race is an unstoppable force for good and we look forward to being part of that journey with Denis and Nadia."