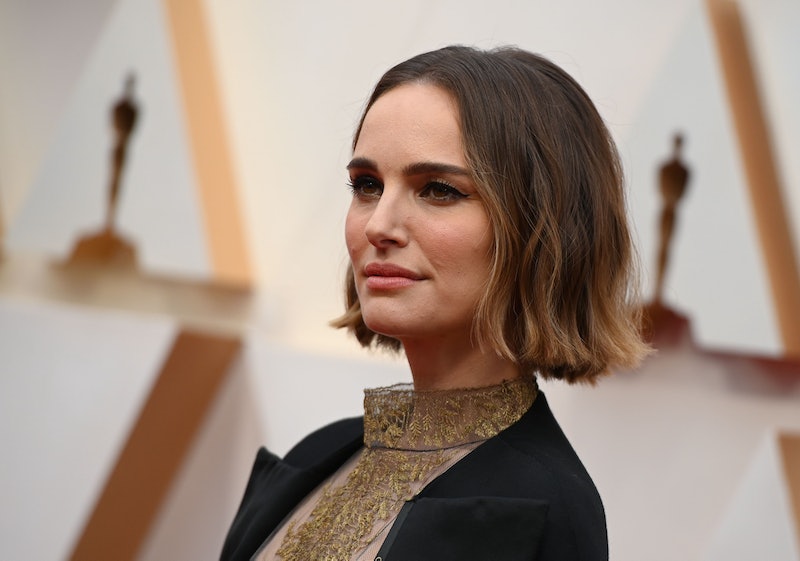 During the Oscars 2020 announcements in January, Issa Rae famously read the list of all-male best director nominees and said, "Congratulations to those men." Now, Natalie Portman's Oscars look is drawing attention to that same lack of diversity. The Thor: Love And Thunder actress wore a Dior cape featuring the names of the female directors who were snubbed at the Oscars this year.

Los Angeles Times staff writer Amy Kaufman posted an interview on Twitter where Natalie explained the intention behind her cape. "I wanted to recognize the women who were not recognized for their incredible work this year in my subtle way," she said. The names on Natalie's cape reportedly include Lorene Scafaria (Hustlers), Lulu Wang (The Farewell), Greta Gerwig (Little Women), Mati Diop (Atlantics), Melina Matsoukas (Queen & Slim), Alma Har’el (Honey Boy), Marielle Heller (A Beautiful Day in the Neighborhood) and Céline Sciamma (Portrait of a Lady on Fire).

Just like Rae's now-viral quip, Natalie Portman made a powerful — and necessary — statement about the need for more inclusivity at the Oscars. Only five women have been nominated for Best Director since the Oscars began, and Kathryn Bigelow is the first and only woman to win the directing Oscar, for The Hurt Locker in 2009.

After Portman walked the red carpet, Alma Har’el shared her support for the actress's look and the message behind it. Har’el tweeted a close-up photo of her name embroidered on the cape, writing: “My first time at the #Oscars. Couldn’t have been more beautiful.”

Natalie Portman will likely hit the awards season red carpet circuit next year as well, as she's currently reprising her role as the astrophysicist Jane in Thor: Love and Thunder. The fourth film of the Thor franchise sees Jane take on the role of a female Thor, and it hits theaters in November 2021.

More like this
What Is Mary J. Blige’s Net Worth? The 9-Time Grammy Winner Is Doing “Just Fine”
By Hugh McIntyre
Paul Mescal’s Family Celebrated His Oscar Nomination In The Sweetest Way
By El Hunt
Yes, You Can Stream ‘To Leslie’ In The UK Now
By Sam Ramsden
Twitter Is Overjoyed By Angela Bassett’s Record-Making Oscar Nomination
By Maxine Harrison
Get Even More From Bustle — Sign Up For The Newsletter
From hair trends to relationship advice, our daily newsletter has everything you need to sound like a person who’s on TikTok, even if you aren’t.