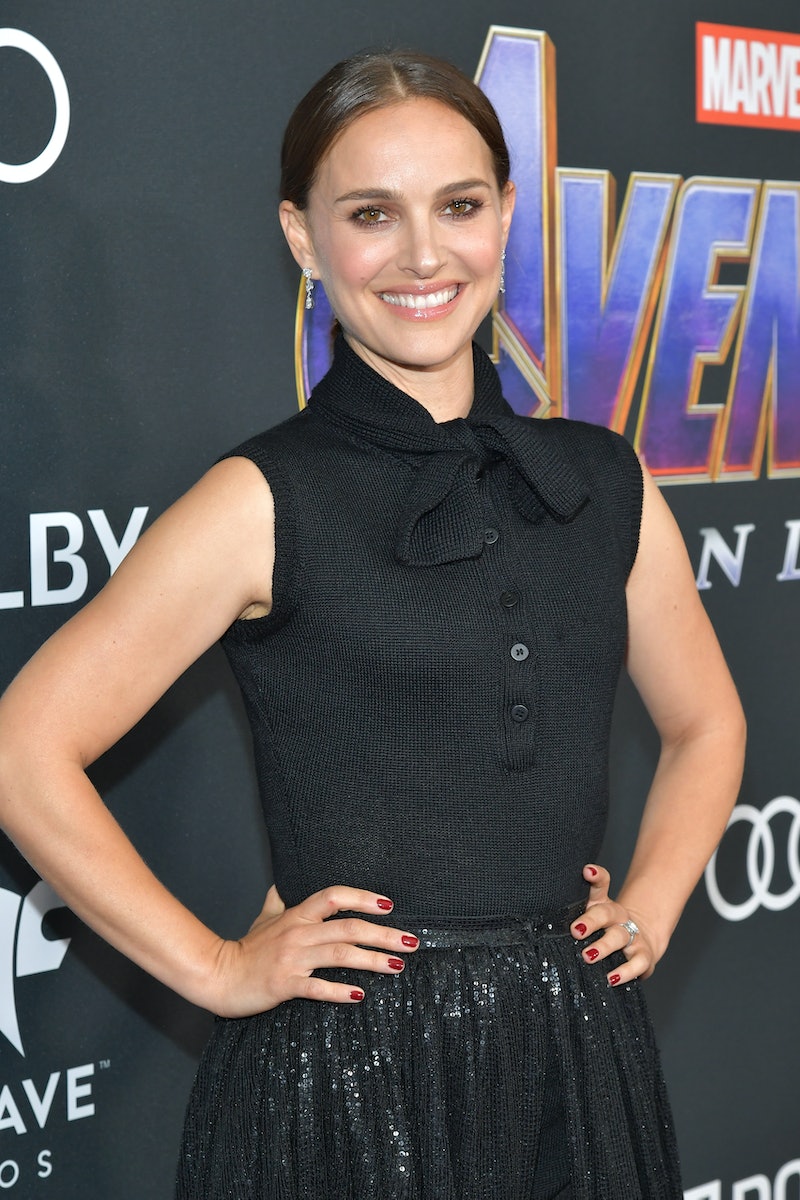 Before Avengers: Endgame hits theaters, fans are already taking bets on who won't be coming back. (Sorry, Captain America, the betting odds are not in your favor.) But, after Natalie Portman’s Endgame premiere appearance, there's another question worth asking: Is Dr. Jane Foster returning for Avengers 4?

Portman walked the red carpet at the Los Angeles Endgame premiere on Monday, April 22, which is curious since her character, the world-renowned astrophysicist Dr. Jane Foster, hasn't been seen since 2013's Thor: The Dark World, and only got a passing mention in Avengers: Age Of Ultron. Back in 2011, The Hollywood Reporter reported that despite signing a three-film deal with Marvel, Portman was allegedly "furious" overWonder Woman director Patty Jenkins's departure from Thor 2. (Jenkins would have become the first woman to helm a superhero film, something she would later do for DC instead.)

After Thor 2, it was reported that Portman was done with Marvel, and in 2016 the actor told The Wall Street Journal, “As far as I know, I’m done.” But, in 2018, Portman hinted she could return to the MCU telling Screenrant, "I’m completely open to everything, but I have no news about that."

Now, Endgame is the end of an era — or, more accurately, the beginning of the end to Phase 3 of the MCU — so it's possible Portman was there for posterity. But some fans are convinced that Portman's red carpet appearance is actually a major spoiler for Endgame. Especially, since Portman's Jane has a connection to a certain Infinity Stone.

In Thor 2, Jane was possessed by Aether, better known as the red Reality Stone, which grants its user the power to manipulate matter. No surprise, that movie's villain Malekith (Christopher Eccleston) wanted to use it for evil, specifically, to bring darkness to the nine realms through bending the laws of physics and reality.

As The Ringer pointed out, Thanos used this stone very differently in Infinity War, creating illusions that tricked people into a false sense of reality by manipulating both people and objects. Most notably, the villain used this to trick the Guardians of the Galaxy, turning Drax (Dave Bautista) into rocks and giving Peter Quill (Chris Pratt) a bubble gun. Could Jane's connection to this stone come in handy in taking down Thanos and bringing back half the world's population? Some fans think so. "omg jane is going to defeat thanos," user @dembelesmessi tweeted.

This possibly could be (kind of) true. The Endgame trailer hints that the Reality Stone could be the key to defeating Thanos. According to Inverse, Hawkeye appears to be retrieving the Reality Stone in the trailer, standing in the same spot where Jane found it in Dark World. It's believed the Avengers will have to use time travel to take down Thanos and if that's the case, Jane Foster's knowledge of the stone may come in handy.

While it might have been surprising to see Portman at the Endgame premiere, directors Anthony and Joe Russo have hinted that Jane survived Thanos' snap. In fact, last year, in an interview with HuffPost, the Russos said Jane's fate was "too spoilery" to reveal. “When we say spoiler, [we mean] potential spoiler,” Anthony said, which means it's possible that she does play an important role in this movie.

But a Thor-Jane reunion should make God of Thunder's fans very nervous. Already, there are rumors that Thor will die in Endgame and Captain Marvel could take his place in the Avengers, so having his love interest return after all these years feels like it could be setting the stage for a final goodbye.

Based on the early spoiler-free Twitter reviews of Endgame, it's clear fans are going to need to bring the tissues, possibly, to mourn Thor. Or, maybe, just maybe, they'll be handy to wipe the tears of joy after seeing Jane Foster help take down Thanos. Hey, it could happen.