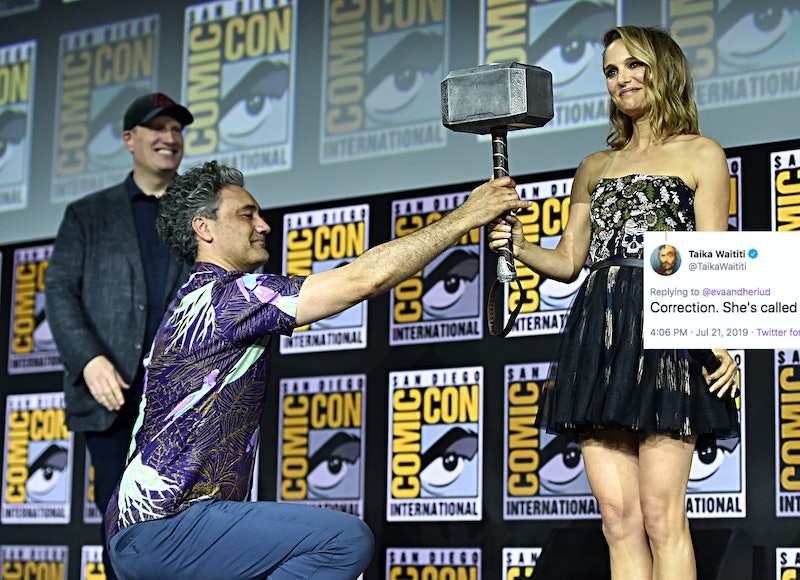 San Diego Comic-Con really delivered this year with a whole lot of Marvel Cinematic Universe news regarding the slate of MCU Phase 4 movies and television shows, including the just announced Thor: Love & Thunder. And, at the studio's Saturday night panel, it was announced that Natalie Portman would be coming back as Jane Foster, following a storyline straight out of the comics where she gains the power of Thor and wields Mjolnir. And before things get out of hand here, Natalie Portman's Thor character name isn't "Female Thor," and director Taika Waititi wanted to make that very clear to everyone on the internet.

After Natalie Portman's return to the Thor franchise was announced, there was a bit of grumbling among fans, as there always seems to be. And people online were quick to refer to her as "female Thor" or "Lady Thor," some in a patronizing way, others as a sign of respect — not to mention as a way to differentiate the two characters. And, while it might be a handy signifier, director Waititi doesn't really like either name for his new Thor, as he made clear on Twitter.

On Sunday, July 21, Eva Victor, a comedian who tweets under the handle @evaandheriud, joked that it was "completely normal and makes sense that when Thor is a man he is Thor and when Thor is a woman she is Female Thor." Waititi's response was, "Correction. She's called Mighty Thor."

This comment that Victor started with was seemingly meant as a new twist on the commentary that recently came about during the FIFA Women's World Cup: Why is it called "women's soccer" and men's soccer is simply... "soccer"? And Waititi's comment shut everyone down by pointing out that there is a way to distinguish between the two: One is simply Thor and the other is Mighty Thor. Checkmate.

Other fans on Twitter also pointed out the double standard, tying in Kate Bishop (aka Hawkeye's daughter who will soon be the subject of her own Disney+ show) and Sam Wilson (formerly known as the Falcon, and recently named the new Captain America).

Ever since Jane Foster quietly left the franchise after Thor 2: The Dark World, she's been briefly mentioned in other films, but that's about it. Her sudden appearance in Avengers: Endgame came as a surprise, and inspired many theories that Portman was returning to the MCU. And they were right, despite her saying in 2016 that she was done with Marvel. "As far as I know, I’m done," Portman told the Wall Street Journal. "I mean, I don’t know if maybe one day they'll ask for an Avengers 7 or whatever, I have no idea. But as far as I know, I’m done, but it was a great thing to be a part of."

Becoming Mighty Thor and getting a story written in a way that honors her character is definitely a good reason to come back. With this news, it seems like Thor: Love and Thunder will take inspiration from Jason Aaron's run of The Mighty Thor comics, where Jane becomes worthy of Mjolnir after Thor Odinson isn't anymore, resulting in her gaining those powers. In the comics, Jane also has cancer, and becoming a god doesn't change that, unfortunately. It's not clear whether this sad subplot will feature in Thor 4, but regardless, good things are coming to Marvel, and it seems like there's no franchise fatigue in sight. At least not for the goddess of thunder.

More like this
Everything You Need To Know About ‘Black Panther: Wakanda Forever’
By Bustle Editors and Radhika Menon
Gabby & Rachel Reveal How That 'Bachelorette' Rose Ceremony Twist Happened
By Grace Wehniainen
Everything To Know About 'RHOC' Season 17
By Brad Witter and Sophia Moore
The 'PLL: Original Sin' Creators Say A’s Identity Will Be “Very Clear” By The Season Finale
By Alyssa Lapid
Get Even More From Bustle — Sign Up For The Newsletter