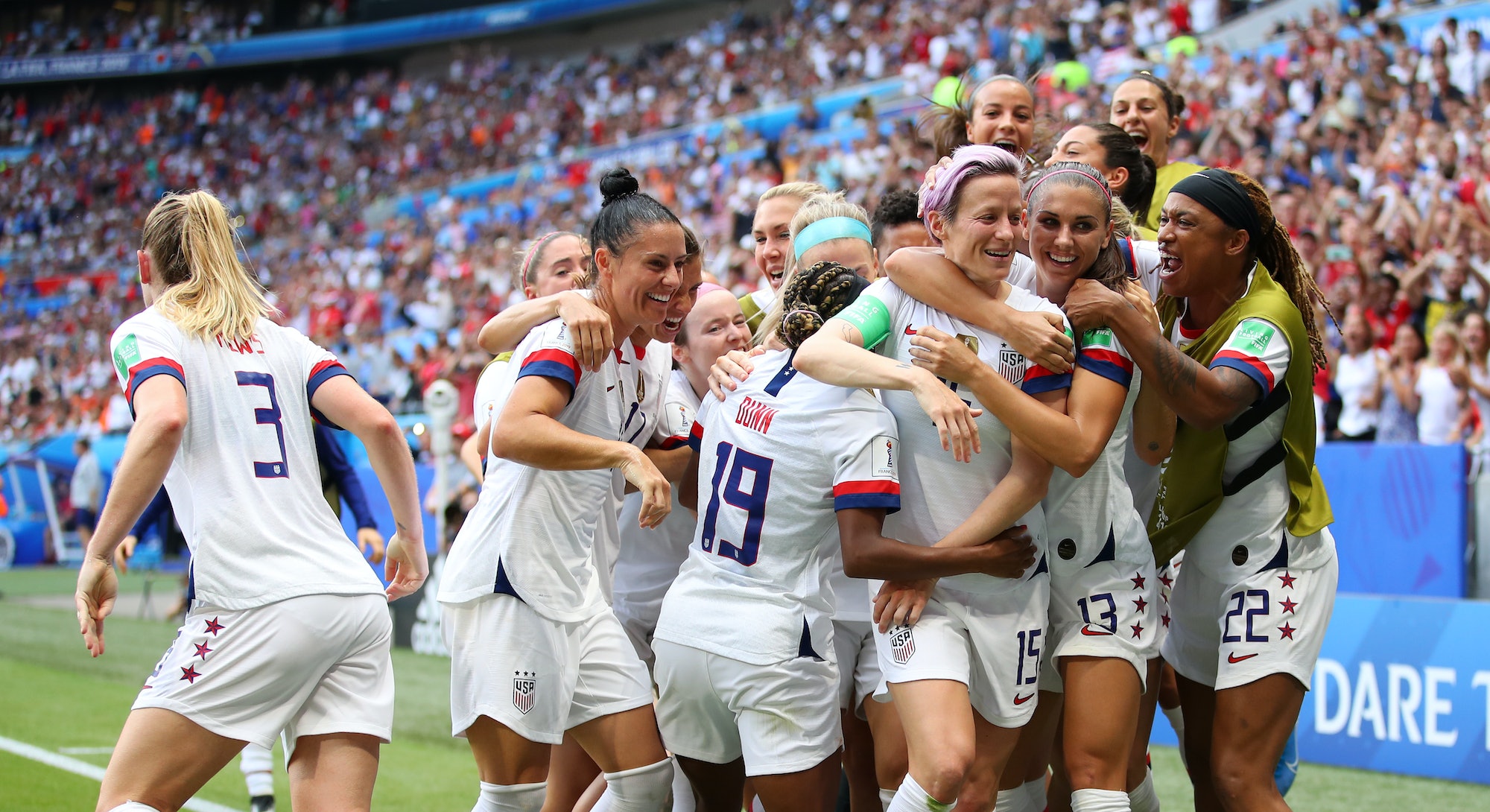 On July 7, the United States Women's National Team reigned victorious over the Netherlands at the World Cup in Lyon, France. When the match was over, Meg Rapinoe, Alex Morgan, Rose Lavelle, and the rest of the brilliant players on the team ran towards each other in the middle of the field, arms wrapping around one another tightly, a circle of white kits growing bigger and bigger as more teammates piled on top. Just like they had all tournament, the players sported their white jerseys with red and blue stripes on the cuffs of the sleeves. This was a not-so-subtle nod to the jerseys the legendary USWNT wore when they won the 1999 World Cup — the same one that a then 30-year-old Brandi Chastain famously stripped off after she made the game-winning penalty kick. But unlike the 1999 jersey, the 2019 version became the number one soccer jersey — men or women’s — ever sold on nike.com in one season, as CEO Mark Parker stated during Nike’s Q4 Earnings call. Chastain isn't surprised by the stat. In fact, she agrees that it's a far superior jersey than the one she and her teammates wore when they played.

"It’s the best one they’ve created yet," she tells me, just a few hours before the USWNT would wear the jerseys on the field and go on to win the championship title. Chastain and I are having lunch at Paul Bocuse, a Michelin-starred restaurant 30 minutes away from the Stade de Lyon where the match would soon take place. The lunch is being hosted by Nike to celebrate the accomplishments of the 2019 USWMNT, win or lose.

"I think [the jersey] represents everyone, from the details of each state being on there [Editor's Note: the back panel features a tonal gray print formed from each of the 50 states], from the construction of the body of the uniform, the material that’s used... I think technically, it’s superior. Aesthetically, it’s superior. I look back to the ones we had and I think, oh my gosh, it was like we were wearing boxes — not to say anything bad about Nike — that’s just the evolution of things," she explains.

"This is a perfect example of [Nike saying] 'We value women’s sports, we value women in soccer, we’re a soccer company, and we’re going to create the best apparel possible.'"

In 2019, for the first time ever, the soccer kits were specifically designed for women's teams, unlike the past when the Women's National teams wore a version of the men's jerseys. "I think back to '99 when we did a campaign about the jersey and it had a big Times Square billboard and it was 'fits like you’re not wearing anything' and that’s true — it was very nice," Chastain recalls. "But I think now, the material’s more breathable, it’s more flexible — it’s kind of like what a soccer player is. [An] agile piece of equipment. The equipment has to be as agile as the athlete that wears it and I feel like Nike has really wrapped its arms around that concept and it makes, even for the fan, wearing the jersey very special."

Chastain adds that Nike has always supported women in sport, but recently, the brand has without a doubt stepped up its game. "Nike has really taken on the challenge of doing what they say, and I think this is a perfect example of [them saying] 'we value women’s sports, we value women in soccer, we’re a soccer company, and we’re going to create the best apparel possible."

Nike sponsored 14 teams in the Women's World Cup, including the two that were in the finals — USA and the Netherlands. Nearly two-thirds of the national teams at the World Cup wore Nike jerseys (and half of them also wore Nike cleats). Professional soccer players make up Nike's second-largest group of sponsored female athletes (behind track and field). And while the USA Women's Home jersey was the best-selling kit of them all, it wasn't the only one that had success in its own country. Nike reported that jersey sales were up 200% over the last tournament four years ago in France, England, Nigeria, and Brazil, and several countries sold the women's designs in men's sizes too, doubling the number of men's jerseys sold over the previous tournament in 2015.

It's evident that Nike has invested a lot (specifically: a lot of money) in the World Cup this year. The popularity of women's soccer is at an all-time high and sponsors are betting on the sport to grow even bigger, especially on the heels of the World Cup. In fact, it's safe to say it has surpassed interest in men's soccer in the United States. According to Fox Sports, more people tuned in to watch the Women's World Cup final than the 2018 men's final. But for Nike, it's more than just slapping a swoosh on a jersey and creating ads that will bring you to tears. It's about continuing to design revolutionary gear that can support women athletes like Meg Rapinoe so that they can continue to win championships, break records, and inspire other young girls to do the same.

"We as a design organization get to create the future of sport, and in doing so, recognize that sport and athleticism and movement never stand still. It’s always progressing," says John Hoke, Nike's Chief Design Officer, during a recent presentation in Paris on the brand's upcoming innovations. "Athletes have an amazing ambition to break boundaries and push through barriers, so part of our job is to give them equipment and motivation and training and tools to push the world of sports forward."

While jerseys were a big focus for Nike this World Cup, it wasn't the only "piece of equipment" the brand wanted to innovate for the players. The sports bra was of equal, if not greater importance to them, like it has always been. And who would know that better than Chastain, who accidentally became the face of Nike Women when she iconically fell onto her knees in her black Nike Sports Bra to celebrate the 1999 World Cup victory.

"I have to compliment Nike in saying that they already support something that hasn’t been supported before — and I'm gonna say that tongue in cheek, like sports bras. They literally support women," Chastain explains. Unlike other brands, Nike finally "made the jump over the chasm that [a sports bra] is not just two pieces of material sewn together," she says. "It’s technical, it’s meaningful, it’s now a part of the uniform — it’s not just an after thought."

You don't have to be a World Cup-winning athlete to know how critical a good sports bra can be — anyone who has ever gone on a jog or downward dogged at a yoga class knows that a supportive sports bra could make or a break your workout and more specifically, your confidence. According to Hypebae, studies indicate that by 14 years old, girls drop out of sports-related activities twice as fast as boys, with research suggesting that "the single biggest change that could increase physical activity would be having access to the right kind of sports bra." So this year, Nike challenged itself to do better, not just for the soccer players at the World Cup, but for women everywhere. The result was the Nike FE/NOM Flyknit Bra.

"Nobody knows female athletes better than Nike," says Julia Igarashi, VP, Creative Director for Nike Women's Brand. "Our Nike Sports Research Lab, the community of over 1,000 designers, [the] researchers, [the] scientists on material innovation — we’re taking data and information [and] we’re using that to inform new space for the brand and to really serve up new solutions to some of the age old problems around support and moisture management and warming and cooling," she explains during the Nike innovations presentation on how it came to develop the new FE/NOM Flyknit Bra.

Nike engineers and designers spent more than 600 hours of biometric testing to "pinpoint support, breathability, and structure in the exact place that she needs it" when creating the FE/NOM Flyknit Bra, Igarashi shares. And while it was the chosen bra for many World Cup players at this tournament, Igarashi is more excited about the fact that everyone, professional athlete or not, will have access to the same bra.

"We put an asterisk behind the word athlete because we believe that if you have a body, you are an athlete," Igarashi shares. She says that Nike has been working to "open their aperture" and expand their definition of what sport means not just for athletes at the elite level, but to "serve athletes of all sizes and shapes in whatever their endeavor is to health and well-being." Nike currently offers 57 different sports bra styles in three support levels, 12 different materials, and sizing from 30A to 44G.

It may have taken a while for Nike to be this inclusive — it wasn't until 2016 that the brand widely expanded its plus size offerings — but like Chastain tells me earlier, the brand appears to be fully committed to supporting all women, not just this year, but moving forward. In the next few months, Nike will unveil a bevy of launches that are specifically focused on including women who have otherwise felt left out by sport.

"This is truly a tipping point for our brand and for women’s sport going forward," says Hoke. "We are so excited with the momentum we see, we’re so excited to help this next generation with support and inspiration to take the world into a much better place. We believe that design [can] help this."