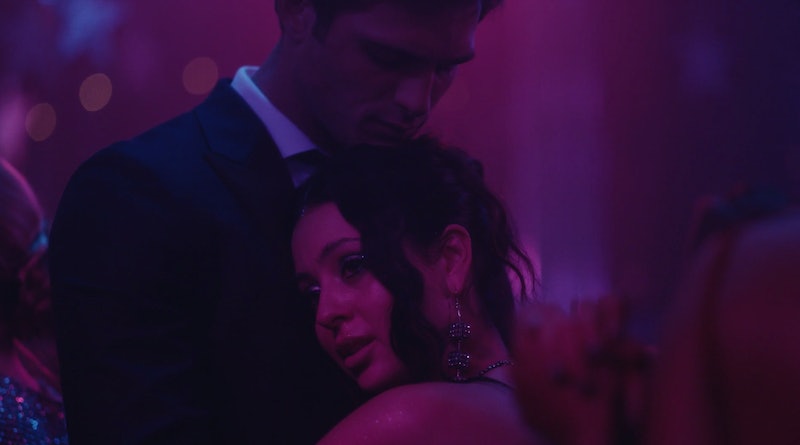 Spoilers ahead for the Euphoria Season 1 finale. While there are quite a few unhealthy relationships on Euphoria, Nate and Maddy's has always stood out as the most disturbing. Nate's internalized homophobia and toxic masculinity — mixed with his need for total control — fostered an abusive relationship with Maddy that she struggled to fully recognize, much less break away from. But in the season finale, Maddy is finally able to acknowledge how damaging and unhealthy things are for both of them, and surprisingly, Nate agrees. However, this doesn't necessarily mean things will change between them in Euphoria Season 2.

After his confrontation with Rue in the Aug. 4 episode, Nate ditches his new date to dance with Maddy, who begrudgingly agrees. (It's not explained why Nate and Maddy broke up again, but it's likely a mix of their argument about Nate's sexuality, Nate laying hands on Maddy again, and Maddy finally seeing that the Jacobs family is indeed "weird.") "I really f*ckin' hate you. You're abusive, psychopathic. Most of the time I really hate the way you make me feel," Maddy tells Nate as they slow dance. "It's not good for us. Meaning like, we shouldn't be together." To all of this, Nate says over and over, "I know."

The exchange is significant because it shows they do recognize their relationship is unhealthy (believing abuse is normal is one of the many reasons people stay in abusive relationships), but it's also astoundingly candid for a couple that went so far as to frame another man for choking Maddy rather than admitting it was Nate. For the entire season, it felt like Maddy would never be able to see Nate without rose-colored glasses on, and even her own friends aren't fully aware of how deeply toxic their relationship is; at the dance, they all agree Nate and Maddy will get married someday and enjoy a turbulent but ultimately happy life.

"[Maddy] really is in love with Nate, despite how dysfunctional and toxic their relationship is," Alexa Demie, who plays Maddy, told The Hollywood Reporter earlier in the season. "She has a little bit of hope inside of her that he will be everything she wants him to be."

But while Maddy and Nate have taken an important step in recognizing their toxic dynamic, there are a number of reasons people choose to stay in abusive relationships — out of fear, out of shame, out of love. And while, according to the National Domestic Violence Hotline abusers like Nate can change, they need to be sincere about wanting to. Openly acknowledging the abuse is the first step, but to really make a difference, the abuser has to accept responsibility for their actions, identify patterns of abusive behavior and what causes them, and actively work on changing those behaviors without expecting credit for any improvements.

There's not enough in the episode to tell if Nate is owning up to his abuse because he wants to become a better person, or if he's just parroting what he thinks Maddy wants to hear. On one hand, Nate's breakdown after being pinned down by his father suggests he's done with trying trying to conform to his father's demands and beliefs. Perhaps he is tired of fighting, and is ready to not... well, be a villain anymore. On the other hand, he still mocked Rue at the dance, and made no attempt to make amends with Jules for tricking and blackmailing her.

There's also the major issue that Nate and Maddy aren't just trying to overcome an abusive relationship. They committed several crimes together, including false testimony and coercion, on top of Nate's battery of both Tyler and Maddy. So regardless of Nate's intentions, Maddy's involvement in framing Tyler may keep her from being able to untangle herself from him in Season 2. And even if Nate is being genuine and knows he needs to change, that doesn't mean a happy ending is on the horizon. After all, acknowledging his mistakes would mean that Nate would have to eventually come clean about beating and framing Tyler, which would just land him — and likely Maddy as well — in jail.

Even further complicating the matter is the fact that Maddy stole a hidden DVD from Nate's room, and her shocked face after watching it tells us the contents are likely incriminating. But is it the video of Cal and Jules? Nate and someone else? Is it potentially something that Maddy could in turn blackmail Nate about, if he attempts to blackmail her into staying with him or throw her under the bus in regards to Tyler?

There are a lot of variables at play, and fans upset that Nate didn't get his comeuppance will just have to wait for Season 2.

More like this
Here’s When 'She-Hulk' Takes Place In The MCU
By Brad Witter
How Marvel’s 'She-Hulk' Changes Her Comic Book Origin Story
By Brad Witter
Who Plays Trent In 'Never Have I Ever'? Benjamin Norris Calls His Character A “Himbo Stoner”
By Grace Wehniainen and Radhika Menon
Everything To Know About 'Westworld' Season 5
By Sophia Moore
Get Even More From Bustle — Sign Up For The Newsletter