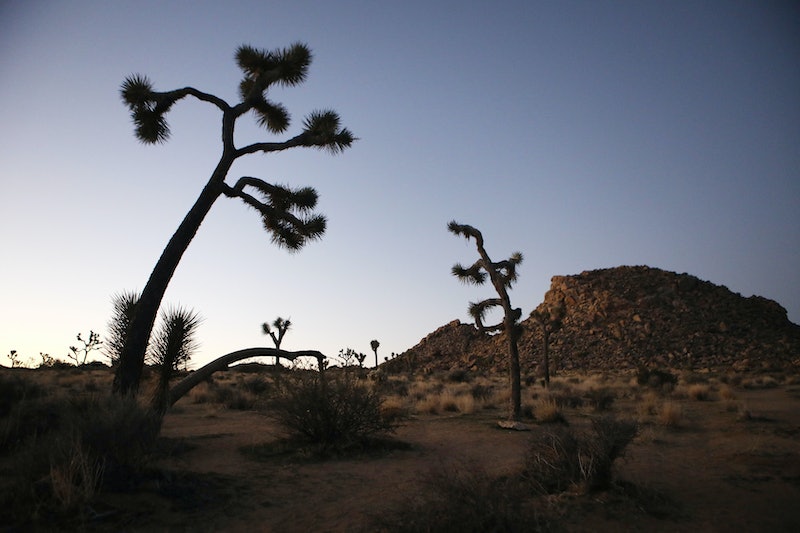 Earlier, campgrounds at Joshua Tree were closed on account of unsanitary conditions resulting from the shutdown, and the entire park was scheduled to close indefinitely on Thursday. However, officials announced at the last minute that the park would remain open by "utilizing recreational fee revenue" to pay for its upkeep.

Normally, there are over 100 officials patrolling Joshua Tree at any given time, but because of the shutdown, only eight rangers are on duty at the 1,235-square-mile park, according to National Parks Traveler. Thanks to this lax security, visitors to Joshua Tree have created illegal roads, chopped down Joshua trees and damaged federal property in the park since the shutdown, National Parks Traveler reports.

"Joshua trees were actually cut down in order to make new roads," Joshua Tree National Park Superintendent David Smith told National Parks Traveler on Tuesday. "We have two new roads that were created inside the park. We had destruction of government property with the cutting of chains and locks for people to access campgrounds. We’ve never seen this level of out-of-bounds camping. Every day use area was occupied every evening."

Some national parks have closed on account of the shutdown, but not all of them have. Many that remained open have been overflowing with garbage and human waste, as the workers normally tasked with cleaning them have been furloughed. In San Francisco, Reps. Jackie Speier and Jared Huffman, working with activists, collected three bags of trash from Lands End and Ocean Beach, which lie within federal jurisdiction, and shipped them to the White House in order to illustrate the impact of the shutdown on national parks, McClatchy reports.

President Trump instigated the shutdown when, in late December, he announced that he wouldn't sign any government funding bill that didn't allocate $5.7 billion to build a U.S.-Mexico border wall. Congressional Democrats have refused to authorize that funding, however, and because neither side has budged from their respective positions, no resolution to the budget impasse appears forthcoming.

Recently, Trump has suggested that he might declare a national emergency in order to circumvent Congress and start construction on the wall. It's unclear exactly how legal this would be, however, and such a move would almost certainly spark legal challenges.

Around 800,000 federal workers aren't being paid as a result of the shutdown, and over half of them are required to show up for work anyway. Two unions that represent federal employees have sued the administration for not sending paychecks to those who've come in to work since the shutdown, arguing that the failure to pay them is a violation of the Fair Labor Standards Act.

In addition to threatening the cleanliness and safety of national parks, the shutdown has also resulted in the FDA halting almost all food safety inspections in the U.S., NBC News reports.