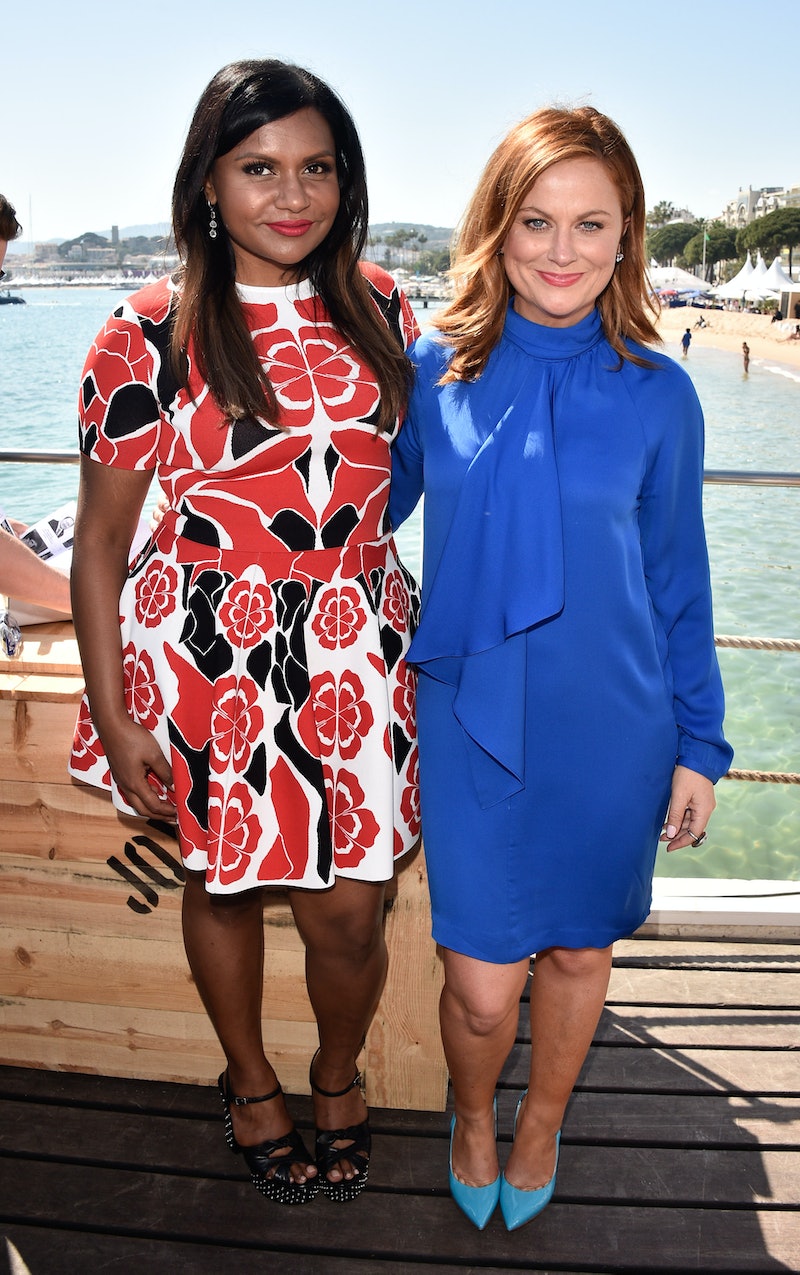 Get ready for some big laughs: NBC announced on Jan. 16 that Mindy Kaling and Amy Poehler are developing comedies for its new Peacock streaming service, per Variety. Scheduled to launch in April, Peacock will also be the exclusive home to TV series the women have starred in, including The Office, Parks and Recreation, and The Mindy Project. When it comes to these new shows, however, Kaling and Poehler will be behind the camera.

The network described the Poehler-produced project Division One as a "coming-of-age comedy about an underdog women's collegiate soccer team that gets a new female coach — a former professional soccer player who's fallen from grace — and must decide whether or not they're going to take the risk of trying to be great," according to the trade publication. Barry and Unbreakable Kimmy Schmidt director Maggie Carey is writing, directing, and executive producing the show, and, as reported by E! News, retired national women's soccer player Abby Wambach is also among the series' executive producers.

As for Kaling, the comedy she's executive producing is titled Expecting and will center on a "fiercely independent but perpetually single music manager" named Ellie. According to Variety, Ellie "has always wanted a family but never found a man worthy of the role of "father." Upon turning 39 years old, she finally asks her gay best friend, Jonathan, to be her sperm donor.

Other new comedy series the network said are currently in development, per Deadline, include: MacGruber, featuring Will Forte's Saturday Night Live character, as well as animated fantasy series The Adventure Zone, which will be based on the McElroy family's Dungeons & Dragons podcast and bestselling graphic novel series. Meanwhile, Orange Is the New Black's Laverne Cox will both co-write and star as "proud, trans woman, Desiree" in Clean Slate. The previously announced Saved by the Bell reboot is also headed to Peacock after it launches later this year.

Peacock will also feature a new anthology drama series, whose first installment, Hatching Twitter, "goes behind the meteoric rise of the tech company." It seems that the forthcoming streaming service may just have a little something for everybody — though fans are sure to particularly delight in Poehler and Kaling's returns to their NBC comedy roots.

More like this
Pedro Pascal Barely Got Through The "Lisa From Temecula" 'SNL' Sketch
By Stephanie Topacio Long
Melanie Lynskey Plays A “Ruthless Leader” In 'The Last Of Us'
By Brad Witter
'Stranger Things' Finn Wolfhard Is “Proud” Of Noah Schnapp For Coming Out
By Sophie McEvoy
Linda Ronstadt’s “Long Long Time” Plays A Pivotal Role In The Last Of Us
By Brad Witter
Get Even More From Bustle — Sign Up For The Newsletter
From hair trends to relationship advice, our daily newsletter has everything you need to sound like a person who’s on TikTok, even if you aren’t.