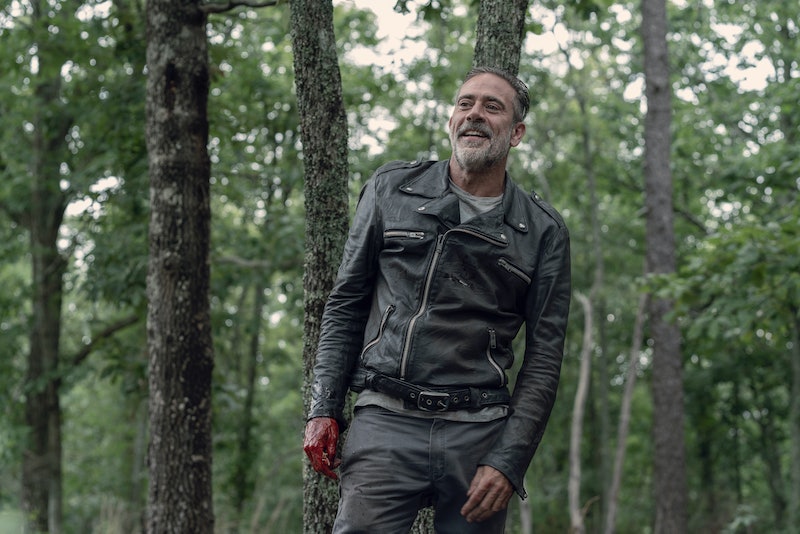 Spoilers ahead for The Walking Dead Season 10 Episode 6. He proved his devotion to Alpha by kneeling for her, but what's Negan's plan with Alpha on The Walking Dead? As he told Beta himself (and fans have long known) Negan is no kneeler. And even if he's angry about his years-long captivity in Alexandria, it's extremely unlikely that he truly wants to be one of Alpha's followers. Instead, the most likely options are that Negan is either going to use Alpha and her Whisperers to exact some sort of revenge on Alexandria or he is going to follow his comic book character's path — and fans should be rooting for the latter.

Viewers of The Walking Dead have only seen Negan as the chatty leader of the Saviors and the chatty prisoner of Alexandria. For him to willingly become a follower of any group — let alone the silent Whisperers — is a total departure from his character. But Alpha and Beta don't know Negan like viewers do. So while he's playing along with Alpha and antagonizing Beta, it's an undeniable fact that he must have some other agenda. Because there's no way Negan wants to be living that Whisperer lifestyle — he has far too much life in him to go along with Alpha's radical beliefs.

While Beta might be fueled by jealousy, he was rightfully suspicious of Negan just strolling into their group. Yet, Alpha appeared fairly smitten by Negan's enthusiastic efforts to join the gang. That seems awfully naive of Alpha, but maybe she's desperate for someone with insider knowledge on the communities. Or maybe she just needs someone to converse with since Beta doesn't excel in that department. Or maybe she's so overly confident in herself that she couldn't conceive of being duped by Negan. After all, showrunner Angela Kang has compared Alpha to a cult leader to Entertainment Weekly.

Of course, Alpha has proven that she has a few tricks up her sleeve, so it is possible she doesn't trust Negan and is making him believe she does. But right now, the more interesting possibility is that Negan is the one who is manipulating her.

Negan might be teaming up with Alpha since the Alexandria council had been seriously considering executing him. But using Alpha and her Whisperers for revenge against Alexandria doesn't track considering how Negan had begun to soften toward the community.

Instead, he may go the route of his comic character. After earning Alpha's trust in the graphic novel, Negan ends up killing her and bringing her decapitated head to Rick at Alexandria. Rick's not around on the TV show anymore, but Negan could still show how devoted he is to the Alexandria community if he defeated Alpha and brought evidence to the council.

There is an element in the TV series that's not present in the comics that could change Negan's motivations. He has an established relationship with Alpha's daughter Lydia and even unintentionally killed someone while protecting her. His relationship with Lydia may make it harder for him to murder Alpha if he knows it would hurt her. Yet, he might be even angrier with Alpha that she caused Lydia so much damage in her young life and feel even more inclined to see the kill through.

Kang told EW that Negan's new storyline with the Whisperers "opens up that question of, is the old Negan completely back? Was he never really gone?" Negan is still a ruthless killer when he has to be, as displayed when he killed Brandon. But that murder was also a rejection of the Negan that he used to be — a leader who could justify his horrendous actions by any means.

When Negan kneeled before Alpha and proclaimed, "I'm all in. Whatever you want, whatever I got — it's yours," he might have been channeling what he would have wanted to hear back in his Savior days. Remember: Every Savior had to claim, "I am Negan." So perhaps his own past megalomania may be exactly what he needs to get into the headspace of (and get the head of) Alpha and start the Whisperer War in earnest.

More like this
'Bridgerton' S3 Teases Exciting Social Season For Penelope Featherington
By Bustle
Brandon & Serene Reveal The Major Relationship Milestone They Celebrated After 'BiP'
By Kadin Burnett and Grace Wehniainen
Taylor Swift Fans Sue Ticketmaster For The Eras Tour “Ticket Sale Disaster”
By Jake Viswanath
The First Trailer For 'That '90s Show' Includes So Many Nods To The Original Series
By Jack Irvin, Alyssa Lapid and Grace Wehniainen
Get Even More From Bustle — Sign Up For The Newsletter