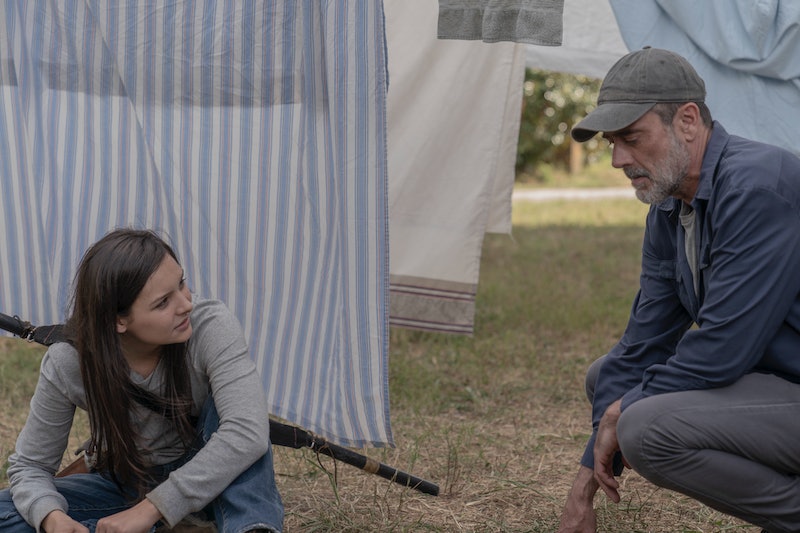 Spoilers ahead for The Walking Dead Season 10, Episode 4. After years of being locked up and tied down in Alexandria, Negan escaped jail on The Walking Dead. While he had taken a brief hiatus from his prisoner status in Season 9, this escape feels more permanent. With the Alexandria Council deciding whether Negan should die, his life is in peril back in the community. So he's most likely willing to take his chances on the outside than he was last season. And, if his character follows his comic counterpart's trajectory, Negan's escape might become incredibly helpful when it comes to the communities facing off with the Whisperers.

Negan may never be a "good guy," but he has proven that there's much more to him than being a villain with a baseball bat. He has an affinity for children, as he has shown through his relationships with Rick's kids Carl and Judith, and in Season 10, he has begun to bond with Lydia. Lydia is outcast by a large part of Alexandria because of the actions of her mother Alpha. But Negan is one of the only people genuinely looking out for the former Whisperer. When she's attacked by a group of Alexandrians in the night, it's Negan who comes to her rescue.

Unfortunately, he accidentally kills Margo in the process when he pushes her aside. As some citizens are calling for his blood in return and the council is torn on whether or not to execute him, Negan flees Alexandria.

Who helped Negan escape his cell is a mystery. Lydia is the obvious choice and she even confesses to it. But Daryl says he kept watch and she never left the house. In the past, Negan was able to leave his cell because someone forgot to lock the cell. But that seems far less likely since he had just killed someone. Judith has a fondness for Negan, but she wasn't in Alexandria at the time since she was at Hilltop with Michonne. Gabriel was the one who demanded more time regarding Negan's sentencing, so it's possible this former Catholic priest was feeling particularly merciful and released him, but then why would he be so surprised when he sees the jail cell? That just leaves one guy.

Daryl is one of the only other people who truly cares about Lydia. He knows that Negan accidentally killed Margo only because he was defending Lydia. So maybe rather than depend on Gabriel's decision, Daryl took matters into his own hands. It's certainly a long shot considering how much Daryl despises Negan for what he did as the leader of the Saviors. Plus, if Daryl was the one to have let Negan go, it doesn't seem likely that he would confine Lydia to a prison cell like she asked.

Another unlikely candidate who may have released Negan is Carol. The chances of it being her increase when you look at Negan in The Walking Dead comics. The circumstances are entirely different, but Negan escapes Alexandria and joins up with Alpha and her Whisperers. However, he ends up slitting Alpha's throat and presenting it to Rick to show he is loyal to Alexandria. His actions do cause a full-blown war between the Whisperers (led by Beta) and the communities, but you can't deny that Negan in the comics is fairly responsible for stopping the threat of the Whisperers once and for all.

With Negan defensive of Lydia and Carol consumed by revenge, perhaps she set him free to go after Alpha in her stead. Again, this alliance would be pretty shocking, but Carol wants vengeance for Henry's death and is currently isolated enough to have possibly made this plan occur.

Whether he teamed up with Carol or not, Negan going after Alpha like his comic character would be pretty satisfying. As ScreenRant pointed out, the Comic-Con trailer also hinted that Negan may battle the Whisperers since the last shot is Michonne holding Lucille. If Negan is the one to kill Alpha and returns to Alexandria, perhaps Michonne will reward him by giving him back his beloved weapon and allowing him to fight the Whisperers on his own terms.