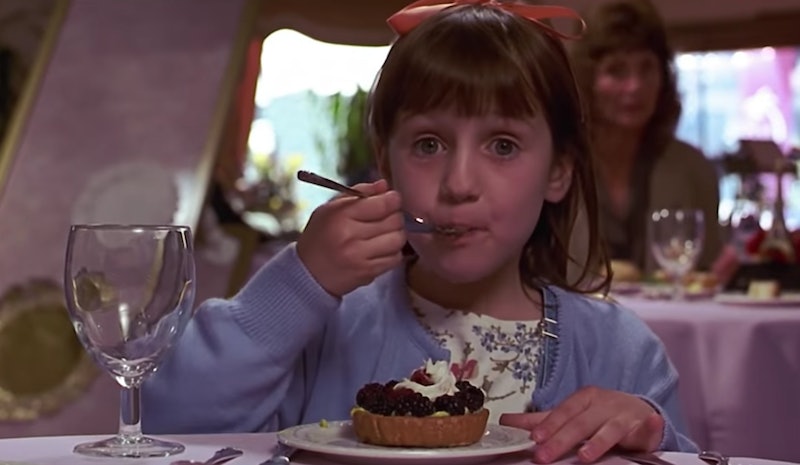 Over the past few years, it's become increasingly clear that cartoons aren't just for kids — nor are they just for Saturday mornings, either. And thanks to streaming sites like Netflix, animated shows and movies have only become more popular, and there aren't any signs of that slowing down. To that end, Netflix is bringing back Matilda as part of their upcoming slate of animated series based on Roald Dahl stories. Sometimes, cartoons that are made for kids are just as enjoyable for adults, too. And if Netflix is planning on bringing everyone's favorite magical reader back to the screen, then this will no doubt be a hit with all age groups.

On Tuesday morning, Netflix tweeted the announcement that the streaming giant would create their own new takes on some of Dahl's most celebrated stories, including Charlie and the Chocolate Factory, Matilda, and The BFG — each of which have already been made into live-action movies that instantly became family classics. But you don't need to mourn the death of originality just yet, because Netflix will also take on some of Dahl's lesser-known works as well, according to a Netflix press release obtained by Bustle, turning them into limited, "event" animated series.

The forthcoming group of animated series, which will begin production in 2019, will likely also adapt The Twits, Charlie and the Great Glass Elevator, George’s Marvellous Medicine, Boy – Tales of Childhood, Going Solo, The Enormous Crocodile, The Giraffe and the Pelly and Me, Henry Sugar, Billy and the Minpins, The Magic Finger, Esio Trot, Dirty Beasts, and Rhyme Stew. Those are the titles included in the deal between Netflix and the Roald Dahl Story Company, via the press release.

Even if you feel like you've seen enough versions of Charlie and the Chocolate Factory, it's hard not to get at least a little bit excited at the prospect of a new version of Matilda being made. The 1996 live-action version of Matilda starring Mara Wilson as the titular character, along with Danny DeVito and Pam Ferris playing her awful parents, still stands a a popular favorite movie among '90s kids. And it's exciting that a whole new generation of kids will also get a chance to feel touched by the story of the magically gifted child who broke free from her troubled family life.

Sharing Dahl's inspiring and magical tales is The Roald Dahl Story Company's mission in partnering with Netflix, according to the two companies' joint press release. The British author passed away in 1990, and his wife, Felicity Dahl, wrote on behalf of the family to announce the partnership with Netflix. "Our mission, which is purposefully lofty, is for as many children as possible around the world to experience the unique magic and positive message of Roald Dahl’s stories," Felicity wrote. She added, "Roald would, I know, be thrilled."

While the release date of the new series based on Dahl's children's stories hasn't been released, you can probably expect it to come out either in late 2019 or early 2020, and it will likely beat the other Dahl project reportedly in the works: a third live action movie adaptation of Dahl's book, Charlie and the Chocolate Factory. News that Warner Bros. would remake the story about Charlie Bucket first broke last February, and not much has come out since then, save for casting rumors that Donald Glover would play Willy Wonka which spread around the web last June, but were never confirmed.

Even if the story of Willy Wonka's fantastical candy factory might seem over-done, it sounds like Netflix's plans to reimagine Dahl's tales will highlight the author's lesser-known stories as well. It will be exciting to revisit stories like The Enormous Crocodile, Billy and the Minpins, and Rhyme Stew alongside their better known counterparts. As long as we get another Matilda, of course.

More like this
The First Trailer For 'That '90s Show' Includes So Many Nods To The Original Series
By Jack Irvin, Alyssa Lapid and Grace Wehniainen
The 'Kenan & Kel' Reunion On 'SNL' Took A Dramatic Turn, Thanks To Keke Palmer
By Brad Witter
17 Wednesday Addams Quotes For Every Situation
By Grace Wehniainen
Lindsay Lohan Just Recalled A Hilarious 'Parent Trap' Story
By Sam Ramsden
Get Even More From Bustle — Sign Up For The Newsletter