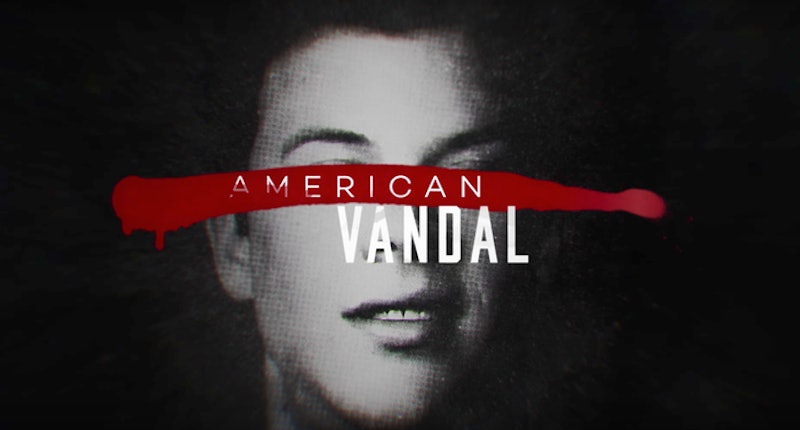 True crime stories aren't anything new, but thanks to new forms of media and new ways of communicating, their popularity seemed to reach a fever pitch after Sarah Koenig's podcast Serial and Netflix's docuseries Making a Murderer. So what better company to release a true crime satire than Netflix, which had all of America buzzing about Steven Avery two years ago? American Vandal, out on Sept. 15, is an eight-part mockumentary from Funny or Die that follows Hanover High School student Peter Maldonado as he attempts to discover if Dylan Maxwell is really guilty of spray-painting penises on 27 faculty cars. The premise is juvenile, amusing, and absurd, but Peter's process is as thorough as any other true crime documentarian these days. And, by so meticulously diving into the motives, access, and alibis of the students and teachers, the series doesn't just poke fun at the genre of true crime, American Vandal mocks the public's fascination with it. Slight spoilers for American Vandal follow.

American Vandal does what every good parody should do — shines a very deliberate light on its subject in a way that makes you realize the ridiculousness of it all. Featuring a crime as low-stakes as high school parking lot vandalism frees up the viewer to see the larger picture. It's not really about who drew the d-cks, it's a commentary on true crime as a genre. So, you can also see how problematic it is that true crime fans get so deeply involved in a story that they have absolutely no personal knowledge of or experience with.

It's understandable that people become so devoted to true crime stories. Real stories about people who have done unthinkable acts are oftentimes more captivating and mind-boggling than any fictional story. Yet, observers of these stories often feel self-important and empowered to come up with their own theories about what really happened — forgetting that real people's lives are at stake. The accessibility of true crime stories because of the existence of social media takes things to another level. Everyone feels entitled to claim they know who really committed the crime, and they have a platform to do it on. It almost becomes a game for the viewer — and, in the case of series about real, horrific crimes, people's treatment of the show can lessen the seriousness of the subject. For example, Making a Murderer had viewers jumping to defend Steven Avery — but the actual victim of the series, Teresa Halbach, kind of got lost in the shuffle. The story of her death was buried in a wave of support for her convicted murderer.

In the case of whether or not Dylan did or did not draw the d-cks in American Vandal, Peter notes how every event has "meaning," every theory "makes sense" or "adds up," and every new discovery is "big." This is hallmark language of wildly popular true crime series (can't you just hear Peter channeling Koenig?). Every detail is framed as being significant when it comes to uncovering the truth in true crime, even seemingly unrelated events.

While that's not to say that these details aren't worth investigating, the problem arises when so many people have the ability to over-analyze tiny moments and draw conclusions that are mostly based on opinion. With every new reveal in a true crime series, which can be intentionally manipulated to create more intrigue, your interpretation of what happened can change drastically. If Alex Trimboli lied about the handjob, then could he have lied about the penis-drawer? If Spanish teacher Ms. Shapiro vendetta's against Dylan was so all-encompassing, then could she have set him up? Those two theories go down in just the first episode, and there are plenty more hypotheses where they came from in the seven following episodes of American Vandal, proving how assumptions are a slippery slope — and this is just a show about vandalism.

When real people and more serious crimes get involved, playing armchair detective goes from fun to dangerous — especially if the public decides to gang up on a target who isn't actually a real suspect. Suddenly, someone's life is turned upside down in the pursuit of a conclusion that may not even exist. This happened when Making a Murderer debuted and many viewers jumped to accuse Teresa Halbach's brother of her murder — though he was never considered a suspect by police and Steven Avery was convicted of the crime. But, the reality didn't matter to viewers who wanted to jump to horrific conclusions that could be severely damaging to a real person.

With these theories come real consequences, something that Peter learns in American Vandal. When a true crime story has a rabid fan base — even when the crime is as asinine as d-cks drawn on cars — the real people involved are impacted. After all, why do you think police investigations are usually not done out in the open? Once the court of public opinion gets a hold of the smallest detail and blows it out of proportion, the damage is done, regardless of the truth.

Peter's documentary goes viral in episode 5, so how the fandom surrounding true crime stories can make thing worse is really able to be examined. In the final episode of American Vandal Season 1, Sarah Pearson calls this out when she makes Peter realize that he was been airing people's dirty laundry when it barely has anything to do with the case. Peter later admits that he has learned that "an accusation could ruin someone's life." But by that point, the accusations have been made. Fan theories had flooded in. And, as silly as you may think the people are who became so invested in the phallus-drawing in American Vandal, just take a moment to consider how Making a Murderer and Season 1 of Serial made armchair detectives of the public — and how neither of those crimes is any closer to being solved than they were before. Yet, the families of the victims now must deal with everyone and their mother thinking they know who really did it. The trauma this creates for those who actually lost their loved one is unimaginable.

To over-analyze the hilarious crime in American Vandal is to take the fun out of the parody. But while you're laughing at American Vandal, you'll also inevitably see the parallels between what's occurring on screen and how you've reacted to watching a true crime story. At least with American Vandal, you can embark on the series guilt-free knowing that no cars were actually harmed in the making of this documentary. But, as for real life — maybe take a beat before you rush to make a judgement.

More like this
The 'Black Bird' Stars Are Both Heading Back To Apple TV+
By Brad Witter
Why 'Black Bird' Suspect Larry Hall Recanted His Jessica Roach Confession
By Brad Witter
Where Is Charlie Evens Now?
By Morgan Leigh Davies
Meet Charlotte Laws, The Woman Who Helped Take Hunter Moore Down
By Arya Roshanian
Get Even More From Bustle — Sign Up For The Newsletter