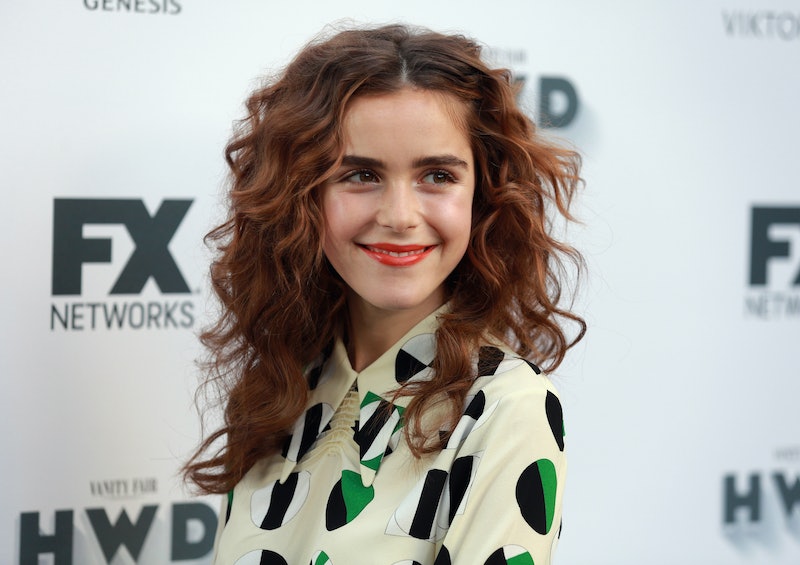 It's time to join the coven, Sabrina fans. On Friday the 13th, no less, Netflix unveiled the official Instagram and Twitter accounts for Chilling Adventures of Sabrina. That means following the Sabrina the Teenage Witch reboot's progress just got a whole lot easier.

The new series is from Riverdale showrunner Roberto Aguirre-Sacasa, and it's a darker take on the Sabrina Spellman '90s kids grew up with. Based on the comic book series of the same name, the official description of Chilling Adventures of Sabrina reveals:

Now fans can follow the progress of the upcoming series via the official Instagram and Twitter accounts. The first welcome messages have already been posted, and they're appropriately spooky. In a set video featuring the new Sabrina herself, Mad Men's Kiernan Shipka, the young actor says, "Hey, witches, welcome to our coven!"

Shipka then pans the camera around to reveal her fellow cast members, including Lucy Davis (Aunt Hilda), Miranda Otto (Aunt Zelda), Chance Perdomo (Ambrose), and Gavin Leatherwood (Nicholas). In addition to the set video, the official accounts also shared a teaser of sorts (although, it appears to use footage from the comics, so don't get too excited just yet). Aguirre-Sacasa captioned the video, "Something wicked this way comes.... The @sabrinanetflix account is up and running. Getting closer....this is going to be a wild ride. Get onboard!"

Fans who have been anxiously waiting for teasers to arrive are going to want to pay extra close attention to the Instagram account. Since the account's launch earlier today, Netflix has shared a whopping 12 images with fans. Sadly, these images probably aren't from the show (and if they are, they're pretty cryptic), but they do feature Salem, some burning candles, and two shots of Shipka. Additionally, there are two images from the comic book, one of which could be telling.

In the panel, Sabrina is lying across her bed. The comic teases, "...or should she go to the pep rally and after-party with Harvey?" The post's caption reads, "Teen witch problems." Previously, Aguirre-Sacasa shared a sneak peek of the pilot script. In the scene described in the script, Sabrina is telling Harvey about her witch-y background in the woods. The comic book teaser and the script spoiler feel as if they could be connected. In October, Digital Spy reported that the visible portion of the script read,

The fact that there's a photo of a blood moon on the Instagram account only makes the connection feel all the more tangible.

As enticing as the the teasers from the show's new social media accounts have been, one thing they haven't revealed just yet is when Chilling Adventures of Sabrina will premiere. Netflix previously hinted the show will land on the site sometime later this year. October, perhaps? With Stranger Things Season 3 set to premiere in 2019, Sabrina and her aunts could make for the perfect spooky show for Netflix to debut in its stead.

For now, fans are just going to have to settle for eerie and intriguing hints from the Chilling Adventures of Sabrina's Twitter and Instagram feeds.