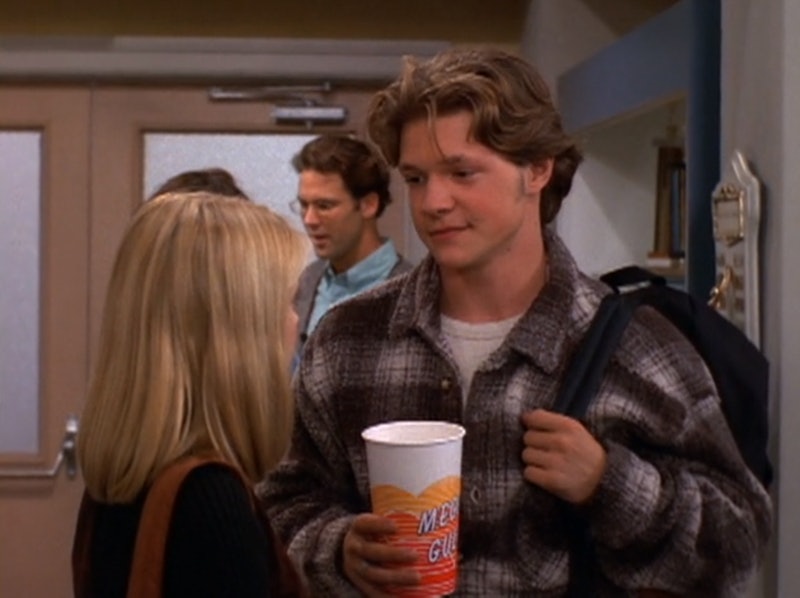 Thanks to series creator Roberto Aguirre-Sacasa, there's some absolutely bewitching news about the Sabrina the Teenage Witch reboot. Aguirre-Sacasa posted a first look at the script on Instagram, and it looks like Harvey will be in the Chilling Adventures of Sabrina. As any '90 kid will tell you, Harvey and Sabrina were one of the decade's most beloved couples, although their romance goes back further than the Melissa Joan Hart series. Harvey is one of the original comic book characters, and he's been Sabrina's most significant love interest since the '70s. Trying to imagine the new Sabrina series without Harvey would be like trying to imagine Riverdale without Betty and Veronica — it just doesn't work.

From the look at the script page Aguirre-Sacasa teased on Instagram, Harvey and Sabrina's relationship isn't going to be full of secrecy like it has been in the past. Instead, Sabrina lets her football player crush in on the fact that she's a witch early on. The scene in question features Sabrina leading Harvey out into the woods to show him where she was born. According to Digital Spy, the excerpt reads,

Sure, the scene is a little bit exposition heavy, but the important take away here is the new series is making sure that Harvey remains an integral part of Sabrina's life. (Now if only the script page confirmed Salem's involvement, everything would be perfect.)

The Chilling Adventures of Sabrina is set to be a spin-off of sorts for Riverdale. Sabrina was originally an Archie comics character, and it's anticipated the teenage witch will make her first appearance on Riverdale before the planned 2018-2019 launch of the solo show. The two shows will even share executive producers — Greg Berlanti, Sarah Schechter, Jon Goldwater, and Aguirre-Sacasa.

Another thing the Sabrina reboot will have in common with Riverdale is its dark tone. Unlike the '90s comedy, this version of Sabrina is based on the more recent comics, which are horror-centric. The official CW description for the potential show reads,

"...reimagines the origin and adventures of Sabrina the Teenage Witch as a dark coming of age story that traffics in horror, the occult and, of course, witchcraft. Tonally in the vein of Rosemary’s Baby and The Exorcist, this adaptation finds Sabrina wrestling to reconcile her dual nature — half-witch, half-mortal — while standing against the evil forces that threaten her, her family and the daylight world humans inhabit."

If it sounds more Buffy the Vampire Slayer than Sabrina the Teenage Witch, that seems to be what the writers are going for. As much fun as the comedic Sabrina was, giving the character an edgy update could work in the show's favor. After all, Riverdale's noir tone has done wonders for Archie and his pals.

The promise of Harvey is a reassurance that not everything about Sabrina's story is going to change. While this version of the show is all about the horror, Sabrina will likely still have Harvey by her side — only this time they might just be fighting the forces of darkness. And, come on, you know that sounds like a blast.

More like this
The 'Kenan & Kel' Reunion On 'SNL' Took A Dramatic Turn, Thanks To Keke Palmer
By Brad Witter
The First Trailer For 'That '90s Show' Includes So Many Nods To The Original Series
By Jack Irvin, Alyssa Lapid and Grace Wehniainen
These 'Law & Order: SVU' Throwback Pics Show 23 Years Of Shipping History
By Grace Wehniainen
Kim Cattrall Had A 'Sex And The City' Reunion With Creator Darren Star
By Grace Wehniainen
Get Even More From Bustle — Sign Up For The Newsletter