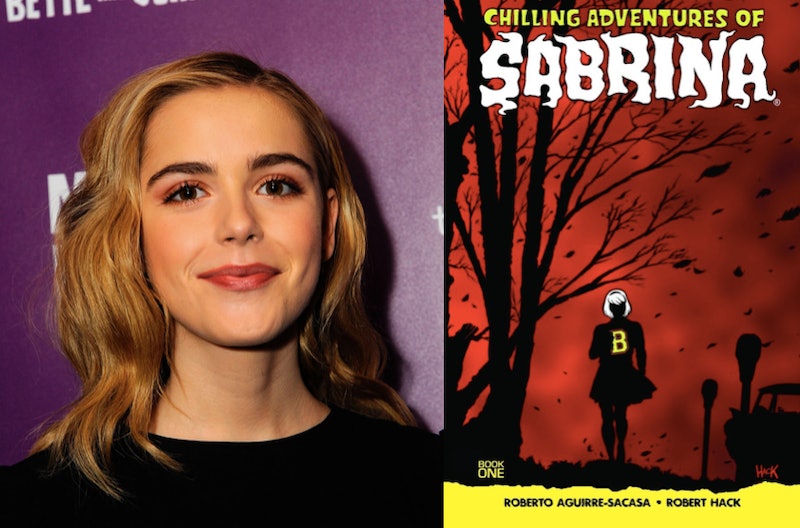 Following the announcement of the series finding its lead witch, fans are eager for more details about Netflix's Sabrina The Teenage Witch reboot. To the excitement of many on the internet, Mad Men's Kiernan Shipka will be playing Sabrina Spellman, as she navigates high school life with the help (and in some cases, struggles) of magical powers.

While the original TV series starring Melissa Joan Hart made a whole generation wish they could point their finger and have some sort of spell take place, the upcoming show isn't expected to be as bubbly and upbeat. Rather, it's being promoted as quite the opposite.

Based on Roberto Aguirre-Sacasa's The Chilling Adventures Of Sabrina comics, this version of the beloved witch is definitely taking things to a much darker place. As fans may know, Aguirre-Sacasa is also the showrunner of Riverdale, another series based on Archie Comics. The CW hit is known for not being afraid to take things to a dark place, so you can bet his latest series won't shy away from that either.

Since you can't (unfortunately) cast a spell and skip ahead to the future, here are all the details about the show so far to tide you over until it actually premieres.

You may recognize the 18-year-old from playing Sally Draper on Mad Men, or B.D. in FX's Feud: Bette and Joan. Either way, she's on board to play Sabrina. And she was a top pick for the series, as Netflix's press release features an enthusiastic quote from Aguirre-Sacasa:

"We’re all such huge fans of Kiernan’s work that when we started talking about who this new incarnation of Sabrina could be, her name was on everyone’s wish list. This is a darker, more macabre version of Sabrina, and we’re incredibly excited for people to see Kiernan make this iconic character her own."

The initial reactions on Twitter suggest the internet is just as pumped.

It May Be Here Sooner Than You Think

As ComicBook.com cleverly pointed out, the Archie Comics official Twitter hinted at the Sabrina release date. Whether intentionally or not, in their tweet about the news of Shipka's casting, they referred to the show as "the upcoming 2018 Netflix series." That means sometime between now and Dec. 31, the witchy show will find its way to your TV.

The Inspirations Are, Uhhh, Dark

If the first look above isn't enough to convince you, just read this log-line from the Netflix press site:

That whole "tonally in the vein of Rosemary’s Baby and The Exorcist" line is enough to push fans to the edge of their seats.

20 Episodes Are On The Way

Yup, Netflix ordered a whopping 20 episodes of the show. According to The Hollywood Reporter, the series was picked up for two seasons. Based on a simple guesstimate, that would be two 10-episode seasons. It's enough to get fans hooked, right?

It's The Perfect Opportunity For A Riverdale Crossover

As the same press release points out, "Note: The Untitled Sabrina project comes on the heels of the success of Riverdale, which is also based on characters from Archie Comics." Could this be yet another hint there's a crossover coming?

Plus, when sharing an Instagram of the Sabrina script being worked on to his Instagram, Aguirre-Sacasa wrote, "Perfect project for October as the #Riverdale family expands." Having the Riverdale and Sabrina casts come together would be absolutely perfect.

Harvey Kinkle Is Coming Back, Too

You probably need a magnifying glass to actually read the script shared by Aguirre-Sacasa on social media, but luckily others made the effort to zoom in. According to Digital Spy, it reads,

That also matches up with the concept art, showing Sabrina standing by a giant fire, though Harvey is nowhere in sight. Regardless, fans should be excited to know Sabrina's high school crush is making a comeback.

The Series Still Doesn't Have A Name

The Netflix press release refers to it as the "Untitled Sabrina Project." Unless they're being quite literal and going with that as the name, it looks like fans will have to wait for the real title to be unveiled.

Sure, plenty of details remain under wraps, but there's enough solid info to get you excited about the witchy reboot. No magical powers required.

More like this
'Waterloo Road' Is Back, With More Than A Few Familiar Faces
By Sam Ramsden and Vivian Iroanya
This 'Derry Girls' Reunion Has Delighted Sister Michael Fans
By El Hunt
'SAS Rogue Heroes' Season 2 Is Set To Be An Explosive Watch
By Sophie McEvoy
Another 'Sex Education' Star Has Joined The 'Doctor Who' Franchise
By Darshita Goyal
Get Even More From Bustle — Sign Up For The Newsletter