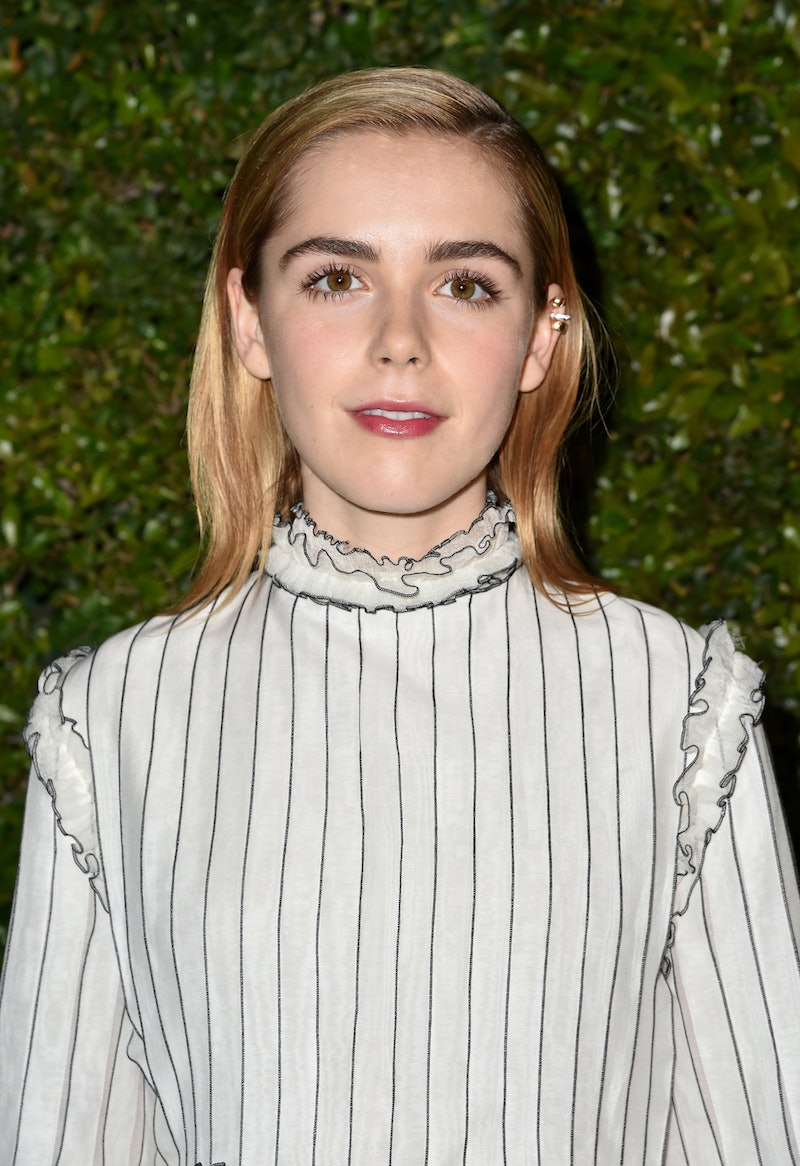 While the Sabrina, The Teenage Witch reboot is still appropriately cloaked in mystery, the Netflix show's official artwork has been revealed. Series creator Roberto Aguirre-Sacasa shared the poster for The Chilling Adventures Of Sabrina on social media on Tuesday. It features the drawn silhouette of Kiernan Shipka's Sabrina, rocking her bob haircut and black headband. But more importantly, the poster has Salem prominently featured over Sabrina's face with only her red lips poking through. The Chilling Adventures Of Sabrina has already promised that it would be tonally different from the Melissa Joan Hart series of the '90s and '00s and the poster is further proof that Sabrina Spellman has gotten a major, yet slightly retro, update.

Aguirre-Sacasa is the chief creative officer of Archie Comics and the showrunner of Riverdale, so he knows a thing or two about adapting the comics into dark dramas for modern audiences. The character of Sabrina, who also originated in the Archie Comics, was originally pretty breezy, like the '90s series showed. But Aguirre-Sacasa gave the character a significantly darker tone when he created The Chilling Adventures Of Sabrina graphic novel for Archie Horror, an imprint of Archie Comics, in 2014. And just like the comic it is based on, the Netflix series will lean into the spooky, supernatural side of Sabrina.

Slightly less obvious than Salem is the occult symbol of a pentagram on the poster, an ominous font, and the stark colors of red, white, and black. It all comes together definitely gets the point across that this version of Sabrina isn't going to be so bubbly. After all, the official Netflix description states:

"The Chilling Adventures Of Sabrina imagines the origin and adventures of Sabrina The Teenage Witch as a dark coming-of-age story that traffics in horror, the occult and, of course, witchcraft. Tonally in the vein of Rosemary's Baby and The Exorcist, this adaptation finds Sabrina wrestling to reconcile her dual nature — half-witch, half-mortal — while standing against the evil forces that threaten her, her family and the daylight world humans inhabit."

Unfortunately, the reveal of the poster wasn't accompanied by a release date for the season; however, Season 1 of The Chilling Adventures is expected to premiere on Netflix in 2018. And all of the other information that is known about the show so far hints that it could be your next TV obsession.

Besides Shipka of Mad Men starring as Sabrina, Lucy Davis (the British Office, Wonder Woman) plays Aunt Hilda while Miranda Otto (The Lord Of The Rings, Homeland) plays Aunt Zelda. Sabrina also has a new friend in Jaz Sinclair's Rosalind Walker, who is the daughter of Greendale's preacher. And don't worry — Sabrina's human love Harvey Kinkle will be back, as played by Ross Lynch.

As BuzzFeed reported, other Chilling Adventures characters include Sabrina's British warlock cousin Ambrose Spellman (Chance Perdomo) and a student at the Academy of Unseen Arts named Nicholas Scratch (Gavin Leatherwood). Richard Coyle plays Father Blackwood, who is the high priest of the Church of Night and the dean of the Academy of the Unseen Arts. Another sinister adult is Michelle Gomez's Madam Satan, who — based on the comics (and that name) — is not to be trusted. There's also Susie Putnam (Lachlan Watson), who is a friend of Sabrina's from the magic-less high school Baxter High. And Deadline reported that Tati Gabrielle will play Prudence, a witch from the Academy of Unseen Arts who holds a grudge against Sabrina.

About a week before he shared the poster, Aguirre-Sacasa also posted a photo from the table read for the ninth episode with Lynch's Harvey, Perdomo's Ambrose, and Leatherwood's Nicholas. The actors all look like they're getting along, but BuzzFeed did note that Nicholas' presence may cause issues for Harvey and Sabrina 'shippers. So things might not always be so friendly between them onscreen.

There's also the all-important character of Salem, Sabrina's cat. As the poster highlights, Salem is still a prominent role in The Chilling Adventures. He is Sabrina's feline "familiar" (her protector), and while he might be more serious than the wise-cracking Salem of the '90s series, he'll undoubtedly still end up as a fan-favorite.

When The Chilling Adventures Of Sabrina does premiere, Deadline reported there will be at least two 10-episode seasons. That's a lot of episodes for Salem and Sabrina to really get witchy.