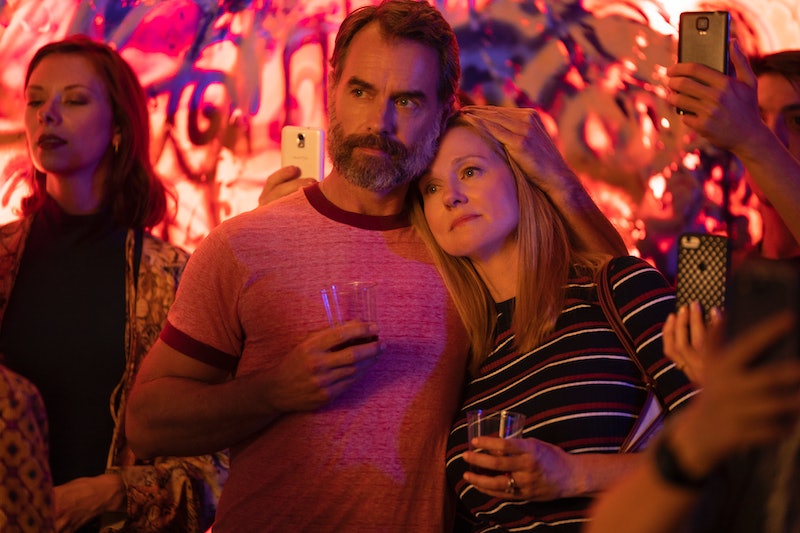 The San Francisco queer community may be losing its real estate, but in the world of Netflix's Armistead Maupin's Tales of the City, they still have 28 Barbary Lane. Though both the city of San Francisco and society's approach to queer culture have changed significantly since the 1993 miniseries based on Maupin's intimate novels about San Francisco's LGBTQ+ community aired on PBS, Netflix's new chapter of the story premiering June 7 maintains the original's sense of magical reality — even if the existence of Maupin's Barbary Lane is a little farfetched in the current San Francisco real estate market.

Striking this balance of realism and fantasy was key for first-time showrunner Lauren Morelli, who also writes for Orange is the New Black. She thinks of Tales as a queer fantasy built in a reality that is "like 15 percent to the left of the real world." "There’s sort of magic to Barbary Lane," she tells Bustle. "It's very joyful and fun and full of glitter."

Behind the ivy-covered door to Barbary Lane is an eclectic apartment complex that houses a bartender, a burlesque dancer, a plant shop owner, and twin performance artists perpetually trying to break the internet. Viewers don't need to believe the size of their apartments — what matters is that they believe in the bonds formed between these renters of all ages, races, sexual orientations, and gender identities. For Morelli, seeing how the characters interacted and supported each other was a key part of the original story's appeal.

"My first feeling when I read Maupin's book was like, 'Oh, I just wish these people were my friends. I wish I was a part of this world. I wish I could hang out with everyone,'" she says. "There’s just such a warmth at the center of the world of Barbary Lane."

That warmth is still there in the new Tales of the City, a limited series that is both a lighthearted comedy and a mystery led by Laura Linney, reprising her role of Mary Ann Singleton. After 20 years, Mary Ann is back and reconnecting with Shawna (Ellen Page), the daughter she left behind when she ditched Barbary Lane for Connecticut, as well as a new generation of queer residents. The mystery lies in the reason Anna (Olympia Dukakis, who's also reprising her role) has decided to sell her beloved home. But the sequel is also a love letter to a resilient queer community that, as Morelli says, continues "to keep the spirit alive even without a physical space."

"I think unfortunately we’re all contending with the fact that there are less physical queer spaces," says Morelli, who came out in 2014 and is married to The Handmaid's Tale's Samira Wiley, "but I think what that's meant, at least in my own life, is that there’s a really strong sense of queer community, even if it doesn’t always have a physical anchor to it."

On Tales, though, Morelli and the writers did create spaces where these colorful characters could come together outside of Barbary Lane. Like the Peach Pit on 90210 or Buffy the Vampire Slayer's The Bronze before it, Body Politic, the queer feminist burlesque co-op where Shawna works, is the kind of TV show hangout that you wish existed in real life. In this case, it actually was based on the Lusty Lady, a peep show co-op in San Francisco that Maupin wrote about in his 2007 novel Michael Tolliver Lives. (Sadly, it closed in 2013.)

Instead of mourning the loss of the Lusty Lady, Tales of the City dreamt up a new fantastical communal space where queer bodies are on full display, their sexuality represented in loving and empowering ways thanks to a new gaze. "I think often we are allowed to be queer on television but we’re not often sexualized on television," Morelli says, "and when we are sexualized, it’s through a very straight lens and it often feels gratuitous." Here, characters' sexualization is not salacious, but celebratory. It's a word that could describe Tales on the whole, too.

"There’s this inherent love at the base of what Armistead does," Morelli says. "At the center of everything he wrote was kindness." She wanted to bring that same heart to Tales, especially as it relates to depicting the difficult discussions happening within the queer community, like the contentious intergenerational debate over the word "tranny," and whether the LGBTQ+ community has the right to still use it.

"We sort of have to present ourselves as a unified group for many reasons," Morelli says of the LGBTQ+ community, "but to talk about how language has shifted, about some of the resentment that bubbles up as a result of the shifts, and address all those things with empathy and come out on the other side where no one’s right and no one’s wrong is powerful. I really hope we’re inspiring those conversations."

And when you need a place to return to after having those conversations, Barbary Lane will continue to be there for all those who need it.