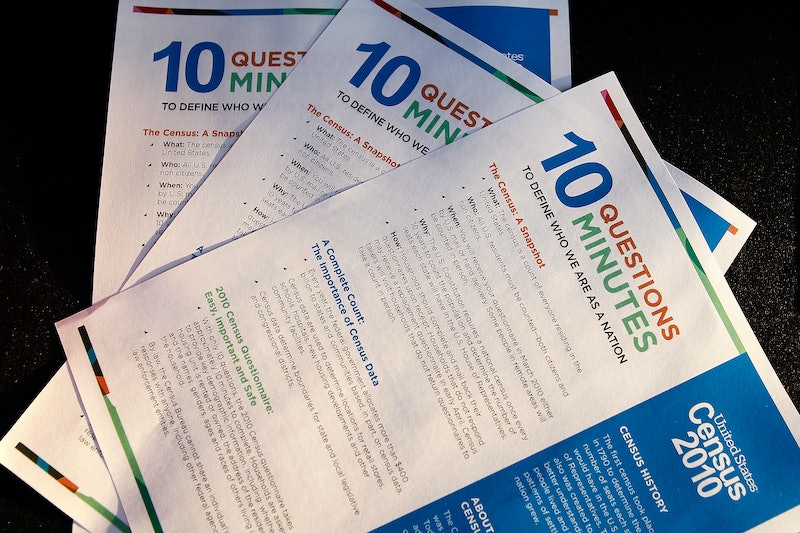 There will be more than twice as many language options for the 2020 census than in previous years, NPR reports, making the nationwide survey more accessible to a variety of U.S. residents. For the first time ever, respondents to the census will reportedly be able to answer questions in Arabic, Tagalog, and Portuguese, among other new language selections. Expanding the languages, NPR reports, may make it easier for officials to reach a larger segment of the country's population.

The 2020 census will also accept responses in French, Haitian Creole, Polish, Japanese, according to NPR, bringing the total number of available languages to 13. English, Spanish, Vietnamese, Chinese, Russian, and Korean were already available.

"This is a huge leap forward from what we did in 2010, expanding the number of languages for the Internet and for telephone," Jennifer Kim, assistant division chief at the Census Bureau, told the news outlet.

While English and Spanish forms will be available in paper form, all other language responses will be collected online or via phone, according to NPR. The census' expanded language offerings come as the Trump administration is embroiled in controversy over its attempt to add a citizenship question to the impending 2020 census.

Whether or not that citizenship question will make the cut for the 2020 census remains a bit up in the air. Back in January, a federal judge in New York ruled that the question should not be allowed.

In her decision, Judge Jesse Furman said that Commerce Secretary Wilbur Ross committed "a veritable smorgasbord of classic, clear-cut" federal regulation violations when he chose to add the citizenship question to the census, according to a copy of her decision available online. According to Furman, Ross "alternately ignored, cherry-picked, or badly misconstrued the evidence in record before him" and also "failed to justify significant departures from past policies and practices."

The legal tussle taking place over whether or not the government can ask census respondents about their citizenship status offers a contrast to the expanded language offerings debuting in 2020. Although there are clear steps toward expanded diversity, exemplified by the array of languages about to be offered, it appears as though some questions about inclusivity are not yet settled.

Expanding language options may not solve every problem the Census Bureau has with collecting data. Even though new language offerings will be available for those answering questions online or on the phone, collecting responses from some communities could still pose a challenge, NPR reports.

"This is a huge step in the right direction," Rawaa Nancy Albilal, president and CEO of the Arab-American Family Support Center told NPR. "But there is still a huge risk that immigrant communities of Arab, Middle Eastern, North African, and South Asian descent will be undercounted."

Albilal told NPR that one of her concerns centered around the fact that the Arabic version of the census will only be available online or via telephone. A lot of the Arabic speakers she works with, she told the news outlet, have inconsistent internet access.

But while some open-ended questions remain, the 2020 census appears on track to take place as scheduled. The expanded language options may make it a bit easier for more people to participate.