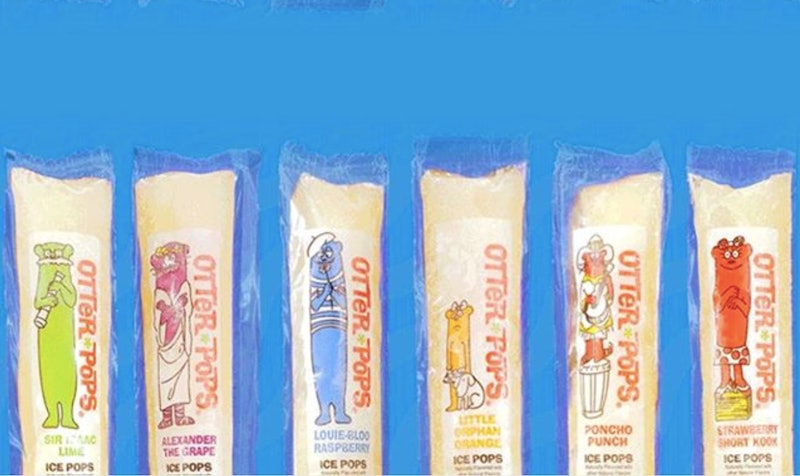 If you’ve noticed that Otter Pops look a little different lately, there’s a reason for that: 100% Fruit Juice Otter Pops have gone colorless, ditching the artificial dyes that have long been used to tint the summertime treat the bright and bold colors for which they’re commonly known. Instead, this version of the classic ice pop is a beige or tan color. Rest assured, though, that the pops still taste like the flavors you know and love — and what’s more, they’ve put a touch of color into the packaging for each pop to make up for the lack of color in the pops themselves. The Original variety remain available for purchase, too — so really, it’s all about options.

Although many are only just noticing the colorless versions of the icy treats now, Otter Pops actually drew attention to them via their Instagram account much earlier in the summer. In a post from June 4, the brand featured a picture of the 100% Fruit Juice pops box and noted, “Check it: Our 100% Fruit Juice Otter Pops are COLORLESS. No artificial colors or flavors, but same zippy taste.” They added the hashtag #ColorlessOtterPops to the end of the caption. A second post published a few days later showed us the pops themselves, noting, “They’re supposed to look like this, promise.”

Unlike the Original pops, which are made primarily of water and high fructose corn syrup and contain “2% or less” apple and pear juice, 100% Fruit Juice Otter Pops are made primarily of water, apple juice from concentrate, and sugar, containing only 2% or less of ingredients like citric acid, natural flavors, and the preservatives that keep them stable. (Original Otter Pops also contains 2% or less of citric acid, preservatives, and flavoring, but the flavors are both natural and artificial.) And, perhaps most notably, Original Otter Pops use Red 40, Yellow 5, Yellow 6, and Blue 1 to create their bright colors, whereas all of these artificial colors and dyes are absent from the 100% Fruit Juice pops. The pops are beige because that’s the color of one of their main ingredients — apple juice.

The packaging for the 100% Fruit Juice Otter Pops also received an overhaul to make up for the bland shade of the treats themselves. Whereas Otter Pops’ wrappers have traditionally just featured the Otter Pop logo and illustrations of each flavor’s associated character drawn in white — presumably so as to showcase the colors of the pops themselves — the illustrations of each character on the colorless Otter Pops’ wrappers are in full color: Looie-Blue Raspberry is bright blue; Sir Isaac Lime is neon green; Alexander the Grape is purple; and so on and so forth. According to Food Beast, the pops still taste like they should, too — noted Hunter Anderson, “The apple juice taste is entirely present, but the flavors we know and love are still very much alive and well. … The gang’s all here.”

Food Beast also reports, however, that the colorless Otter Pops are currently only available at Costcos in California, Oregon, and Washington. But the full-color Original Otter Pops continue to be available at Walmart, Ralph’s, Vons, Albertsons, WinCo Foods, Safeway, Costco, and Amazon, too, according to Insider, in case the whole turn-your-mouth-neon-colors thing is a big part of the Otter Pops experience for you.

The use of artificial dyes in food has long been controversial due to the mixed results of scientific studies examining their effects on our health. The main areas of concern are whether these substances are carcinogenic and whether they can cause or contribute to hyperactivity or other behavioral issues in children.

Some evidence has been found to support both claims; in 2010, for example, a report from the Center for Science in the Public Interest (CSPI) concluded that “nine artificial [food] dyes approved for use in the United States [were] likely carcinogenic,” as well as either related to “hypersensitivity reactions and behavioral problems” or “inadequately tested.” (Two years prior, the organization had petitioned the FDA to ban artificial food dyes due to their possible “connection to behavioral problems in children.”) A 2012 study published in the journal Neurotherapeutics also found what Healthline describes as “a small but significant” connection between the consumption of artificial food dyes and behavioral issues in children.

Studies have not always yielded the same results, however, meaning the research is not in agreement about these possible concerns. For example, not all children seem to have the same reaction to the dyes; meanwhile, with regards to the carcinogenic concerns, studies of Red 40, Yellow 5, Yellow 6, and Blue 1 have found “no evidence of cancer-causing effects,” according to Healthline. (Red 40, Yellow 5, and Yellow 6 are the three most commonly used artificial food dyes, accounting for around 90% of color additives in food.) As such, the FDA has not determined there to be sufficient evidence to enact a ban of all artificial dyes; indeed, it’s possible that many rumors about the alleged dangers of artificial dyes have gotten out of hand.

Notes Linda Katz, M.D., M.P.H, and Director of the Office of Cosmetics and Colors in the FDA’s Center for Food Safety and Applied Nutrition on the FDA’s consumer information page about food dyes, “Color additives are very safe when used properly.” Although she does say that “there is no such thing as absolute safety of any substance,” she adds, “In the case of a new additive, FDA determines if there is a ‘reasonable certainty of no harm’ under the color additive’s proposed conditions of use” before the colors are approved.

But, as Live Science observed in 2012, “consumers can’t hurt themselves by cutting back on a chemical that is devoid of nutritional value.” If some of the risks that might be associated with artificial food dyes are of concern to you, you’re free to reduce or eliminate your consumption of them; if they don’t, though, then you’re also free to keep consuming them as you please. So if you’d rather go for dye-free Otter Pops, the 100% Fruit Juice ones are for you; but if you don’t mind the dyes, then the Original pops are still around, too. It’s all about having the options available so you can make whatever choice is best for you.

Find out where you can buy Otter Pops near you — whichever variety you prefer — over at the Otter Pops website. Summer’s not over yet!

More like this
I Tried The $20 TikTok Viral Oishii Strawberries — Here's What I Thought
By Sophie Hanson
Dunkin’s Pumpkin Spice Latte Is Officially Back This Week
By Mia Mercado
Trust Me, Pickle Martinis Are The New It Drink Of The Season
By Emma Carey
25 Things I've Reduced My Life To, In Addition To WFH In My PJs
By Ginny Hogan
Get Even More From Bustle — Sign Up For The Newsletter