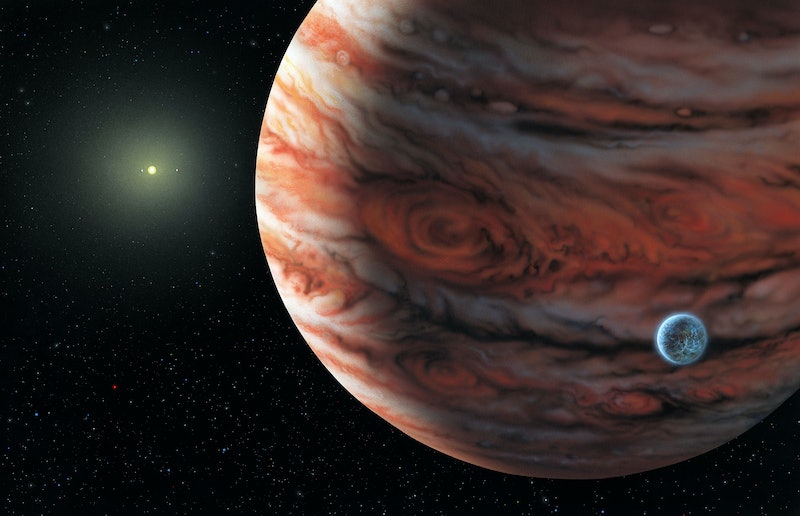 While flying by Jupiter in late December 2018, NASA’s Juno spacecraft captured new pictures of volcanic plumes on Jupiter’s moon Io. The pictures are being touted by scientists as “one of the best images of Io” Juno’s cameras have captured to date. Happy new year! Look at some cool pictures of volcanoes 365 million miles away from Earth!

The images were taken on Dec. 21, during winter solstice. During the spacecraft’s 17th flyby of the planet, four of Juno’s cameras took images of Jupiter’s moon Io, which a press release from Southwest Research Institute calls “the most volcanic body in our solar system.” Io’s volcanoes were initially discovered by NASA's Voyager spacecraft almost 40 years ago, in 1979. However, these newest pictures are giving scientists a clearer image of the the volcanic activity on Io.

“We knew we were breaking new ground with a multi-spectral campaign to view Io’s polar region, but no one expected we would get so lucky as to see an active volcanic plume shooting material off the moon's surface,” Scott Bolton, principal investigator of the Juno mission and an associate vice president of Southwest Research Institute’s Space Science and Engineering Division, said in the press release. “This is quite a New Year’s present showing us that Juno has the ability to clearly see plumes.”

That settles it: 2019 is the year of volcanic plumes.

Juno observed Jupiter’s moon for over an hour, capturing the images which show evidence of an active eruption. To the non-scientific eye, the above photo may just look like darkness, blurry light, bits of yellow and orange. However, as the press release explains, there’s actually a lot going on in the picture: “The brightest feature on Io in the image is thought to be a penetrating radiation signature, a reminder of this satellite's role in feeding Jupiter's radiation belts, while other features show the glow of activity from several volcanoes”

Why was Juno able to capture the volcanic activity? In part, because they’re illuminated by the nearby moon Europa. In part, because of just how big the plumes are. As Candice Hansen-Koharcheck, the JunoCam lead from the Planetary Science Institute, explains, “The ground is already in shadow, but the height of the plume allows it to reflect sunlight, much like the way mountaintops or clouds on the Earth continue to be lit after the sun has set.”

Those two things combined with Juno’s low-light cameras made for an ideal opportunity to capture these new images. “As a low-light camera designed to track the stars, the SRU can only observe Io under very dimly lit conditions,” Heidi Becker, lead of Juno's Radiation Monitoring Investigation, at NASA's Jet Propulsion Laboratory. said. “Dec. 21 gave us a unique opportunity to observe Io's volcanic activity with the SRU using only Europa's moonlight as our lightbulb.”

Basically, ideal lighting and good timing are to thank for these now-historic pictures.

Juno launched in 2011 and first arrived at Jupiter in 2016. The craft is now halfway through its mission, with scientists aiming Juno to complete its map of Jupiter by mid-2021. “Though Jupiter's moons are not JIRAM's primary objectives, every time we pass close enough to one of them, we take advantage of the opportunity for an observation,” Alberto Adriani, a researcher at Italy's National Institute of Astrophysics, said. “The instrument is sensitive to infrared wavelengths, which are perfect to study the volcanism of Io. This is one of the best images of Io that JIRAM has been able to collect so far.”

So, what does this all mean to us earthbound beings? For starters, These new images will also help scientists better understand how Jupiter interacts with its five moons and the phenomena it causes, like Io’s volcanoes.

If planetary meanings are your thing, perhaps you could look into how Jupiter affects your zodiac sign. The giant gas planet is moving into Sagittarius, which is thought to bring good luck. There was certainly a bit of good cosmic timing in play when Juno captured its latest pictures.