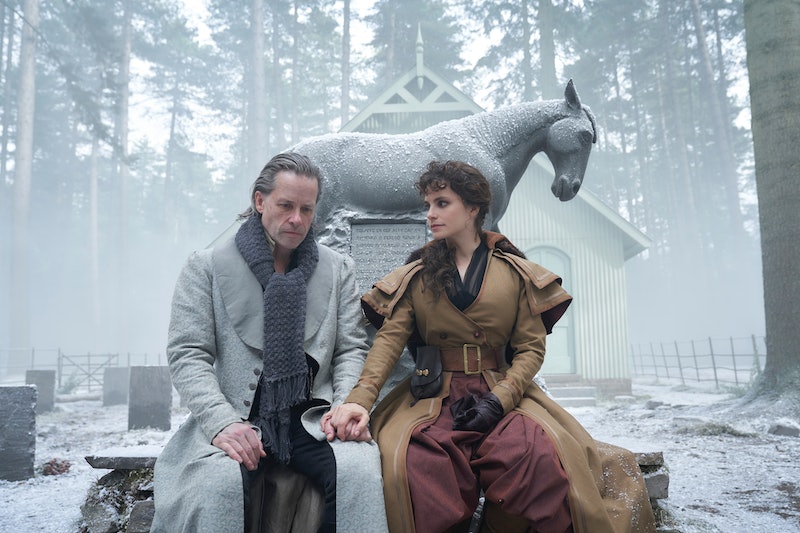 Adapted by Peaky Blinders creator Steven Knight, BBC One's re-telling of A Christmas Carol brings a new spin on a beloved classic. Viewers were given a glimpse of Guy Pearce and Andy Serkis playing the iconic characters earlier this month via a teaser trailer, but now BBC One has released new images from A Christmas Carol, and it looks haunting AF.

Adapted by Peaky Blinders creator Steven Knight, this adaptation will take the Charles Dickens' classic to places its never been — especially when it comes to Ebenezer Scrooge (played by Guy Pearce). "As someone in awe of Charles Dickens ability to create narrative and invent universally recognised characters, I have tried to stay faithful to the text," Knight told BBC One in a press statement. "However, this has involved a close examination of what is written to find elements that perhaps Dickens in his own time was not allowed to write about due to contemporary sensibilities." The writer added:

"I have asked why Scrooge is the man he is, what caused him to be so, and I have offered what I hope are challenging answers."

From the trailer and the new photos, it looks like Knight's rendition will be a lot darker than any we've seen before. Andy Serkis' costume design for the Ghost of Christmas Past looks delightfully terrifying, and the sombre ambience mixed with the Victorian-set design just adds even more creepy vibes to the mix.

"The original material is actually quite dark, in a similar way to old fairy tales being quite scary and frightening," Pearce told BBC One. "I think what Steve Knight wanted to do was look at Dickens' original material and dig in further. There's a brutality and a gravity to it that reflects real life more than a lovely, safe, snow-covered Christmas story."

In Dickens' novella, Scrooge is visited by the ghost of a former employee and three other ghosts that proceed to show him his past, present, and future. They attempt to change him from being a miserable old man to one who is kind and cares for others by showing him different scenarios throughout his life.

"The idea of Scrooge being taken back through his life still exists and the idea of him needing to take a look at himself still exists," Pearce added, "but the journey that he goes on is far more painful and emotional than what we've seen before."