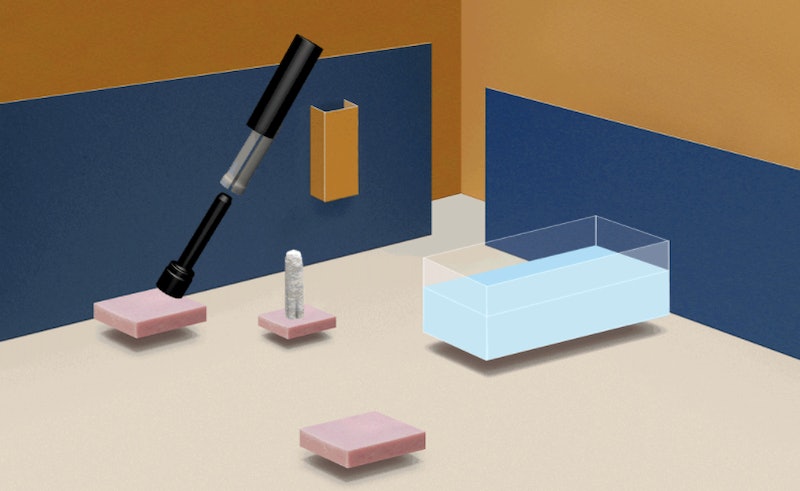 After I tested a bunch of alternative menstrual products for Bustle, to me, there were two clear winners: THINX period panties, and the menstrual cup. The thing is, over the year and a half since I made the switch to more sustainable period hygiene, I have to admit I've used THINX underwear and tampons more consistently than my menstrual cup. Don't get met wrong — I still use my cup sometimes, but I haven't been able to get the insertion down perfectly enough that I don't feel it at all, the way it feels with tampons.

Because I care about sustainability and know that the ingredients in our tampons really matter, I always buy organic, unbleached tampons. I've also tried applicator-less tampons to create less waste, since I know that 20 billion menstrual products end up in landfills every year — and an estimated 7 billion of those are disposable plastic applicators. But the truth is, I've often run into the same problem with applicator-less tampons as I do with the cup — it's harder to do hygienically when you're out and about, and I often find I have a harder time finding the perfect angle. Usually, I end up caving and going back to applicator tampons — it's easier, but it also just seems to get the tampon higher up than I can. That said, knowing I'm still creating more waste than I have to with applicator garbage has been making me feel mad liberal guilt.

So when I got word from Agrawal Friday that THINX is launching a reusable tampon applicator mid-March, I have to say, I was thrilled. Finally, a way to have my applicator and create less waste too! THINX, maker of the magical period underwear, spent the past two years developing and patenting the new invention that they say is the very first of its kind: the reusable tampon applicator. (They named "her" RETA, which is kind of adorable, and makes The Beatles stuck in my head.)

Here's a demo of how the RETA works, by Agrawal herself.

THINX has also made Organic Cotton tampons to use with RETA (regular and super), and there's already a waitlist for both the applicator and the tampons. (You can use the applicator with non-THINX tampons too, though Agrawal tells Bustle that their's are "the best on the market" and made in Europe, where they have some of the strictest rules on the ingredients in tampons.)

If you're wondering how hygienic it will be to clean, Agrawal assures it's as easy as cleaning a cup. "It's made with medical grade silicone, the same material used to make menstrual cups (which stay inside a women for hours). Simply wash it out, put it back in your purse."

Agrawal says she wanted to create the product to combat waste for present and for future generations — especially now that she's pregnant. "The next generation is F-ed if we don't come up with sustainable innovations! There will be more plastic in the ocean than fish by 2050 if we don't change direction fast now!"

I'm still determined to get more skilled with my menstrual cup insertion, but this is yet another great alternative that will help those of us who prefer our tampons with applicators create less waste. I can't wait!