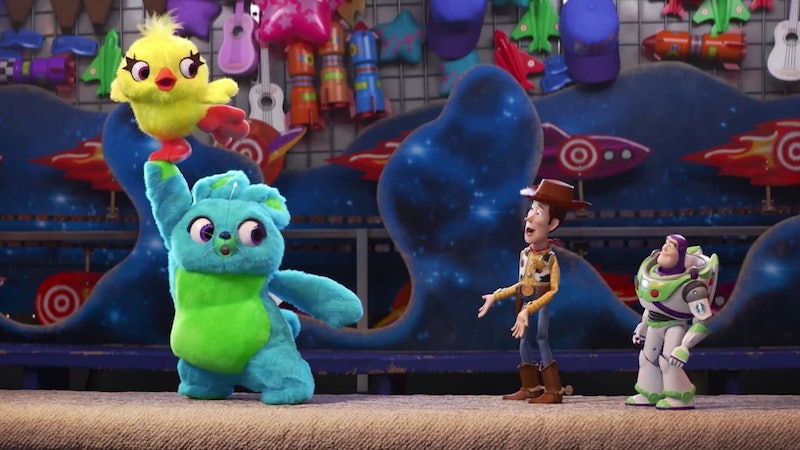 Turns out Forky isn't the only new toy joining Woody on his next adventure. A brand new teaser introduced two new Toy Story 4 characters, Ducky and Bunny, that should sound familiar to Key & Peele fans. Keegan-Michael Key and Jordan Peele will play these stuffed carnival toys that just can't wait to be won. And Woody might be able to help them do that whether they want him to or not.

In the new Toy Story 4 teaser, fans meet Ducky (Key) and Bunny (Peele) as they talk tough about what they've had to endure as yet to be claimed carnival prizes. Specifically, Bunny's had to rough some punk toys up. "I don't care what Cabbage Patch you're from, kid," he tells Ducky. "Give me back my View-Master before I knock the dimples off your face." No surprise, Ducky gets a good chuckle about this. "You are a I-don't-care bear," the furry yellow duck jokes.

That's when the teaser gets a little meta with Bunny letting Ducky know there's going to be a new Toy Story. "I thought those movies were done, dawg," Ducky says. "They made three movies." Films that these two, despite being stuck in the carnival, have seen since they're able to imitate both Buzz Lightyear and Woody — kind of.

When repeating Buzz's catchphrase, Bunny makes a slight change that makes it feel a lot less G-rated. "To infinity and your mom," he says. While Ducky's impression is just straight-up confusing: "To insanity and a blonde!" When Woody and Buzz finally show up to help them the two get a good laugh once they realize what the space ranger actually says — "To infinity and beyond." "That's the stupidest thing I've ever heard!" Ducky shouts about this guy wanting to go beyond infinity. "You don't know nothing about science!"

Clearly, these guys aren't impressed, but it's obvious they'll be going beyond their comfort zone when Toy Story 4 hits theaters on June 21, 2019. According to Disney-Pixar's YouTube page, Woody's visit to the carnival means big changes for Ducky and Bunny, who just want to be won. "But when their plans are rudely interrupted by Woody and his friends," Disney-Pixar's logline for the film states on YouTube, "they find themselves on an unexpected adventure with a group of toys who have no idea what it feels like to be tacked to a prize wall."

In the new film, Woody is thinking about his place now that he's Bonnie's toy. And it seems he's going to learn a few things about the world through these new toys. On Monday (Nov. 12), fans got to see the first Toy Story 4 trailer and meet another new character, Forky, who insists he's not a toy and is voiced by Veep's Tony Hale. Forky is also confused about his place in this world — and maybe the movie itself. "I don't belong here!" he says before running off screaming.

In this new movie, Woody's starting to understand how big the world can be for toys who don't know where they belong like Forky, who really is a spork that Bonnie's turned into a toy. And, if the previous Toy Story films have taught us anything, it's that Woody's existential crisis in Toy Story 4 means fans will need to buy stock in tissues.

Tim Allen even told CBS' The Talk in September that it's so emotional it might be too hard to watch. "It is so emotional, it's so funny, it's so big, the idea they've come up with, I'm startled," Allen said of Toy Story 4. "I couldn't even get through the last scene... A couple scenes towards the end were hard to get through." Granted, Ducky and Bunny are sure to provide some laughs, but don't say Buzz Lightyear didn't warn you.