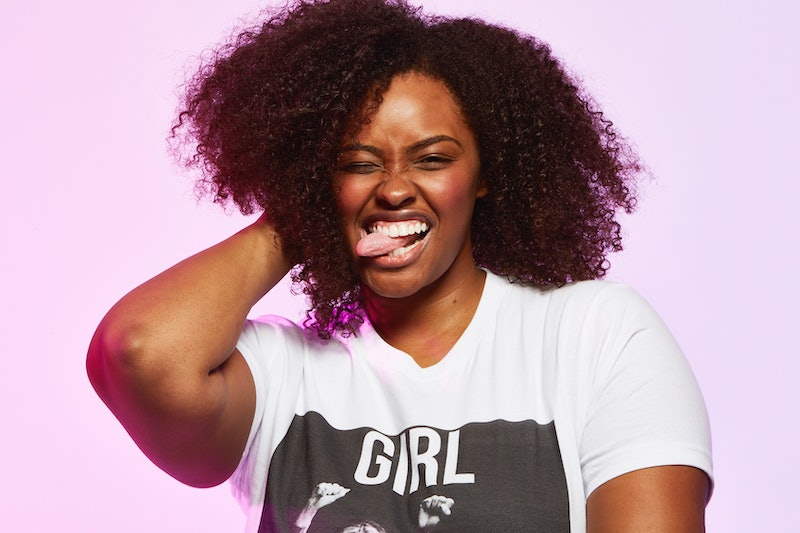 It may sound ridiculous at first, the idea of working on your relationship with food. But if you really think about it, it's one of the most important relationships in your life. There are very few things you have to do every day, multiple times a day, to stay alive — and eating is one of them. Eating is about so much more than survival, though. For many of us, anything related to food is usually one of the best parts of our day, and it's a constant variable that brings us comfort and joy.

The very basic act of eating can be tainted, though, when there's talk of dieting and losing weight surrounding you at every turn — something especially common at this time of year. In 2015, a study by Nielsen found that 32 percent of people who made New Year's resolutions wanted to lose weight. Gym memberships double in January because of everyone's determination to shed the weight they may have gained during the holidays.

Bonnie Brennan, Eating Recovery Center Senior Clinical Director of Adult Residential and Partial Hospital Services, is concerned that these physical-based resolutions aren't doing us much good in the long run. "Unfortunately, I think most of us focus our energy in the wrong direction, in believing that if we appear better we will feel happier inside," she tells Bustle. Rather than trying to alter your diet to change your appearance, Brennan says your time would better spent learning to eat in a healthy, sustainable way.

Here are six New Year's resolutions to improve your relationship with eating.

At this time of year, there's a lot of hype around detoxing and dieting. We're offered plans that will supposedly kickstart a weight loss plan and clear out all the junk we ate over the last few weeks. Admittedly, the holidays are known for being a time of overindulgence, but that doesn't mean you have to atone for any food sins in the New Year by following an extreme plan that will severely restrict your eating habits.

"Following any sort of rigid eating plan can really take one away from being connected and tuned into their body's unique needs and signals," Brennan tells Bustle. When we get caught up in following a strict food regimen, we ignore what's happening internally, which can mess with our intuition and prevent us from carrying on a healthy, balanced diet in the long-run.

Of course, this doesn't go for foods you have a moral objection to, like if you want to be vegan, vegetarian, halal or kosher — that's legit and admirable, and you can stay healthy on any of those diets. I'm talking about foods you're only giving up in an effort to lose weight.

It's common around the New Year to see people quitting or giving up certain groups of food as it is to see people go on a diet. Barring a whole food group is an unsustainable way to live, though, and it can have harmful effects on the body. "We may deny cravings that later turn into binges or we may cut out food groups that take our bodies to nutritional depletion," Brennan warns.

Besides, it's a pretty intense mental battle to tell yourself that you're never going to touch chocolate in the entirety of 2017. Then, when you slip up, you end up punishing yourself and triggering a negative reel of thoughts in your head. You're much better off enjoying the food you come into contact with, and maybe figure out a healthier way to coexist with that chocolate bar instead of unceremoniously kicking it out of your house.

The most popular New Year's resolutions are all about fitness and diet, and the two often go hand in hand. Whether it's a playful joke or a serious statement, we tend to justify what we eat by how much exercise we've done recently. For instance, if we feel like we've worked out hard enough that day, we give ourselves permission to have an extra cookie after dinner.

However, the flip-side of this can be destructive. If we feel like we haven't been active enough, we beat ourselves up for breaking open the potato chips, as if we haven't earned the right to indulge in a snack.

"We can easily get into our own heads about what we should or shouldn't eat, [and] how much we should be at the gym," Brennan says, "and forget about assessing what feels right for us in the present moment." Toss out the calorie tracking and start to cultivate self-awareness instead. That way, you can discover whatever your body is actually asking for. It's about asking yourself what you need, rather than listing off the things you're not permitted to have.

The company you keep has a huge impact on all areas of life, including and especially your relationship with food. If you're constantly hanging around people who count calories, express guilt at what they've eaten, or work out incessantly after eating dessert, you should reconsider how much time you spend with them, because these behaviors will have an impact on how you move forward with your eating habits in this next year.

The kind of folks you want to hang out with are the ones who eat with a smile on their face and truly enjoy the spread that's in front of them. Life is too short to deprive yourself of good food, so don't waste it with people who don't appreciate the art of eating.

There are a lot of celebrities, fitness personalities, and media brands out there that constantly post pictures and blurbs about food, but not all of them will inspire you in a positive way. Scan your social media newsfeed at the start of 2017 and make sure there aren't any accounts that make you feel guilty or inadequate for your lifestyle choices.

"I also caution against putting too much emphasis on a new diet journey as the way to find meaning in one's life," Brennan tells Bustle. That means you should probably avoid the before-and-after pictures that are meant to show how effective certain diets are. Only follow the accounts that lift you up and encourage you to eat in a healthy way.

Handling the food that eventually makes its way into your belly is a great way to connect with what you eat. You'll gain a better understanding of overall nutrition and get lost in the creative process of cooking, without worrying about whether this meal is going to affect your physique.

Even if you're busy, you can always set aside a little bit of time each week to have some fun in the kitchen. Cooking can be a meditative practice of sorts, too, which will help you chill the eff out. And when you finally eat what you worked so hard to make, every bite will be full of gratitude — not guilt.