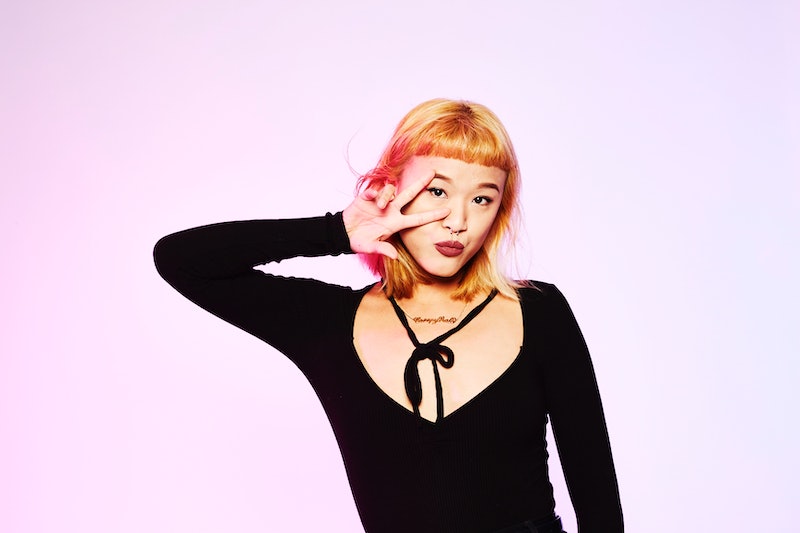 Most of us despise the very idea of them, but we usually get roped into declaring a few New Year's resolutions for ourselves anyway. We're predictable creatures, so our resolutions tend to be somewhat the same every year. A study in 2015 by Nielsen showed that the top priorities for Americans fell into the health and wellness category. On New Year's Day, 37 percent of us promised we would "stay fit and healthy," while 32 percent of us swore we would lose some weight. It's also not uncommon for Americans to want to spend more time with friends and family, and simply "enjoy life to the fullest."

None of the resolutions from this survey pertained specifically to social media use, but there will no doubt be plenty of Americans who will announce some kind of social media resolution this year, especially considering how often we're on our phones. Studies show that 20 percent of the time we spend on electronics is used up on social platforms. An entire 14 percent of that total time is devoted merely to Facebook. It's also been reported that teens spend nine whole hours a day on their social media accounts.

Too much time spent scrolling through Instagram can do more damage than just distracting you from your work. It can disconnect you from the people around you, increase depressive feelings, and cause your mental health to decline. A slight obsession with social media can also cause the grey matter in your brain to shrink and raise your blood pressure. This is mostly avoidable, though, if you use social media intelligently. Just make a few smart changes and 2017 won't be a year when Facebook ruins your life.

Here are seven social media resolutions that are worth working for.

A study in the Journal of Consumer Research found that women battled low self-esteem after viewing the kind of ads that are splattered on social media platforms. We become so insecure that we try to match our own photos to what we see in these ads. We filter and edit every shot, and we only show ourselves when we look our very best.

What if 2017 were the year, though, that we gave up all that pointless labor and just presented ourselves exactly as we are, regardless of whether we think we resemble our favorite Instagram personalities? It's a resolution that can actually strengthen your self-confidence and help you embrace the most honest parts of yourself. Instead of waiting to snap a pic until you can fit in those skinny jeans or until your makeup is perfectly applied, post that natural selfie with pride. Your followers will appreciate your authenticity and maybe even be inspired to the same.

You don't have to categorize yourself into any sort of "body type," but you're aware of the fact that some celebrities and social media stars look like you, and others simply don't. What you see in your social media feed every day can impact how you feel about your own physical appearance, and if you're only looking at profiles featuring people who fit a thin, white, straight, cisgender, femme Hollywood beauty ideal, you're doing yourself a disservice. One body isn't better than the other, but setting your eyes on women who look and feel similar to you will help you feel more positively about your own physique. You'll be less inclined to want to change your body to fit into what's popping up in the social media world.

Retweeting is a great way to connect with people on Twitter while also sharing topics you're passionate about. When we're on a tweeting roll, though, we tend to mindlessly retweet links that sound interesting, even if we haven't had the time to actually peruse the article from beginning to end. It looks good on our profile and makes us look like conscious, intelligent millennials. Let this be the year, though, that you actually live like the person you put out there. Actually educate yourself on the things you believe in before you recommend others to do the same.

Within minutes of waking up we usually have our noses in our phones, and it's a terrible way to start the day. When you immediately set your eyes on what other people are doing, you put yourself in a "reactive" state, and that makes you respond defensively to outside stimuli for the rest of the day; you won't be nearly as productive as you'd like. Use the first few moments of the morning to focus your mind on the important things that are happening today. There's nothing happening on Snapchat or Twitter that you need to see until you've got a warm meal in your belly.

This is one of those no-brainers that is so much easier said than done, particularly when most of your friends and family are guilty of peeking at the Facebook when you hang out together. Just because they get distracted by the virtual world doesn't mean you also have to, though. Quality time together is so much more rewarding when you're truly focused on the people in front of you, so make it a habit to put the social media to rest when you're catching up with the people you love most — even if you're the only one without a phone in their hand.

Of course, we all post articles about topics that make us angry politically or socially. But posting things out of anger directed and friends or relatives is a different matter. As we've seen it play out between stars like Taylor Swift and Calvin Harris, and the One Direction boys, tweeting angry never turns out well. Not only do you end up saying things that you may regret later, but your nasty words become etched in permanent ink, even if you delete the evidence after you've come to your senses. If you're feeling upset at someone you interact with on social media, walk away from the situation, take a few deep breaths, and then think about how you want to move forward.

The reign of platforms like Instagram and Snapchat has become so overwhelming that hardly a picturesque moment goes by without someone documenting and posting it. It's perfectly normal to want to show your friends all the good times you're having, but if you're too preoccupied with getting the perfect shot of that colorful sunset, you might miss out on the beauty that's unfolding before your very eyes.

So when you're at your friend's wedding, look around the room and actually take in how happy everyone is, rather than finding the perfect angle for an Insta selfie. Try to savor some of your most memorable experiences rather than bending over backwards to capture them on your phone. Social media is something that should highlight your life, not dictate it.

More like this
9 Funny Instagram Locations To Use On Your Next Post
By Siena Gagliano
What Does POV Mean On TikTok? The Popular Acronym, Explained
By Emma Carey
Here’s How To Get Verified On TikTok
By Emma Carey
On TikTok, Users Are Pranking Their Loved Ones With Minions Makeup
By Emma Carey
Get Even More From Bustle — Sign Up For The Newsletter