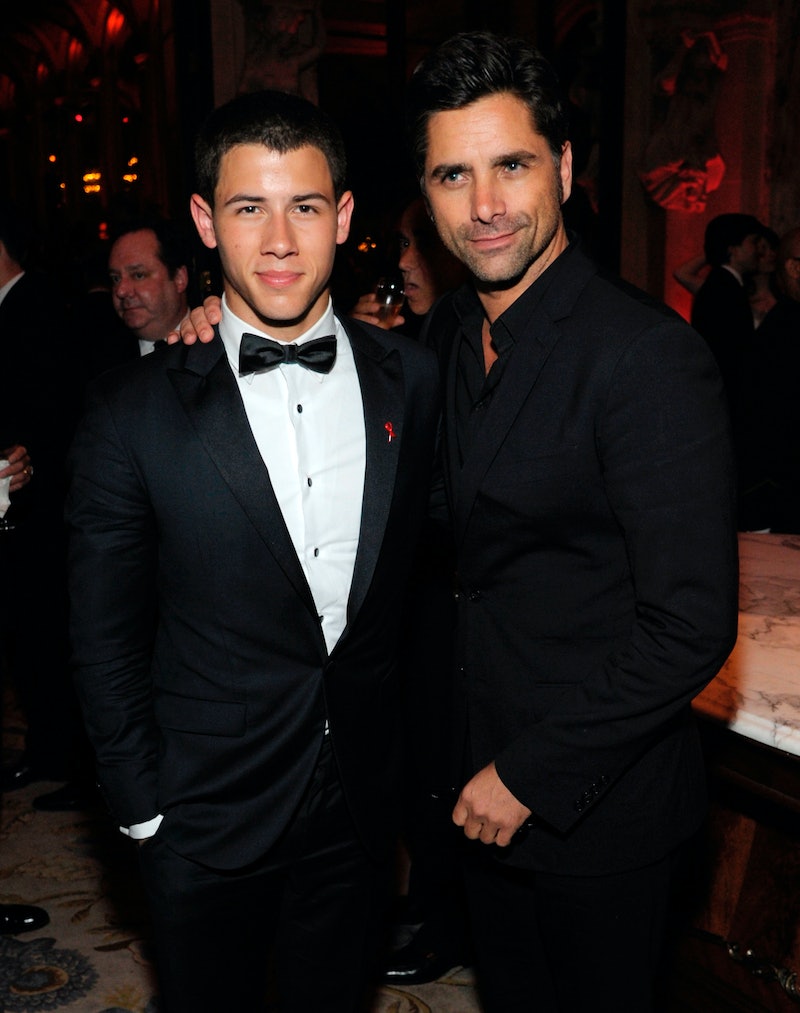 Just when we thought the online trolling war between Nick Jonas and John Stamos was over, Stamos showed up at the boy band's Wango Tango show with his next move tatted all over his right arm. You might recall the game of social media tag the pair started back in March in an attempt to outshine their love for one another, which seemed to end when Stamos shared a fake tattoo of Nick's face on his forearm. Well, he must've felt bad for leaving the others out, because according to Stamos' latest post, he has upgraded to a full JoBros sleeve.

Bringing the bromance full-circle, Stamos was even wearing the original vintage JoBros tee that started it all, as he posed next to all three band members with his sleeve pushed up to flex the new (definitely fake) ink. He captioned the photo, "#UncleJonas," which sent fans into an overexcited frenzy.

"IS THERE A COLLAB FORMING?" @its.jecky.babe on Instagram wrote. Another user took the opportunity to revisit Stamos' Full House character Uncle Jesse's band days. "Have mercy, Hope Jesse & the Rippers 2.0 will go on tour soon!" Instagram user @xc.himene commented. At this point, there's no predicting what the group has in store.

And to think it all began with an innocent display of JoBros fandom from Stamos. He stepped out in the now infamous t-shirt in October 2018 at the American Music Awards, per People, where the paparazzi, of course, snapped a photo. It took a while, but Nick shared his rebuttal on March 2, the day after the release of his band's hit single "Sucker," in which he wore a hoodie printed with the paparazzi shot of Stamos. "It's your move, @johnstamos," he captioned the post.

A few days later, Stamos shared a picture of him cuddled with a pillow printed with Nick's latest post. "Had the craziest dream last night..." Stamos wrote. By that time, a trolling formula had been established. So, Nick took the natural next step by printing Stamos' pillow pic onto a throw blanket and shared a photo of him snuggled beneath it on Instagram. "I’ll sleep well tonight knowing #sucker is number 1!" he wrote.

That's when the initial tattoo prank dropped. On March 15, Stamos shared a pic of him getting inked at Treble Art Studio in Corona, California with the caption, "#jobrosforlife." Nick commented, "Okay... okay..." and his bro Kevin chimed in with, "No way!!!!" That was presumed to be the end of the back-and-forth. Nick seemed to toss up the white flag and surrender the win to Stamos, and hasn't posted another public response. But evidently, Stamos was just trying to outdo himself the whole time.

In their own Instagram post, it seems the boy has given up and accepted Stamos as one of their own. They shared a similar photo from the concert, and captioned it, "Uncle Jonas. Welcome to the family. #WangoTango."

Now, it would be naive to assume that this Wango Tango post is the end of the months-long joke. At this point, people are invested in what it could be leading up to. The band's new album, Happiness Begins, drops in just five days on June 7. Who knows what Uncle Jonas has up his sleeve (ba-dum, tsh) for that.