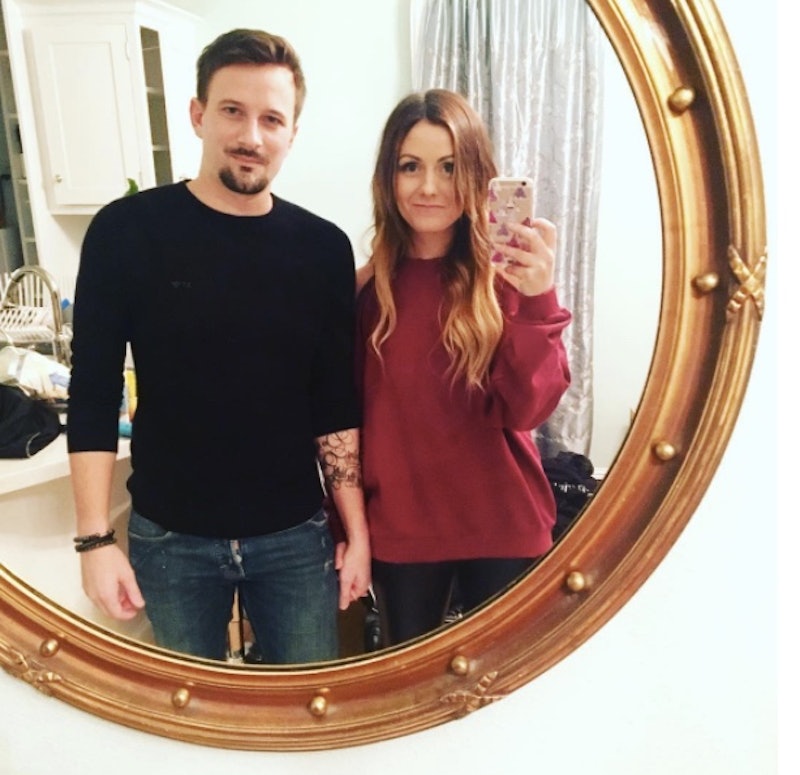 Over the course of Nick Viall's season of The Bachelor, Bachelor in Paradise couple Carly Waddell and Evan Bass will contribute weekly articles to Bustle about their friend's journey to find love. Read their take on Nick's decision to keep Corinne around and more below.

Well, we are officially four weeks into this round of The Bachelor and things pretty much went to sh*t in Monday's episode. There was a lot of crap thrown around, literally and figuratively. There are only 15 women left, and things have gotten a little tense in the house. (Even sweet Raven turned out to be a stiletto-wielding wonder woman.) Basically, Monday's episode could have been titled, "Throw Corinne Under the Bus and Then Back It Up Once You Run Over Her."

Everyone got in on the act, from Vanessa's challenging Nick's decision to keep her safe to Taylor straight up calling Corinne out for what she perceives as a lack of "maturity" and "emotional intelligence." Nick has now been cautioned a few times about Corinne, and it doesn't seem like he cares too much. But, that's a pretty common theme in Bachelor Nation. As the self-assigned resident villain expert, I have dealt with my fair share of them on my shows (Chad and Josh come to mind). And, after watching Monday's episode, I have to know: WHY THE HECK DOESN'T THE BACHELOR LISTEN TO CONTESTANT WARNINGS?

I have a lot of thoughts on the issue. But, before I get too emotionally invested in this topic, here's a recap from Carly:

We started with a Rose Ceremony where the Eve to Nick’s Adam (aka Brittany) and “I Told Nick About Liz” (aka Christen) were sent home, proving once again that when you feed the Bachelor a secret about someone else, you usually get sent home soon after.

Then, Chris Harrison repeated Colin Frissell's words from Love Actually, "[You're] going to a fantastic place... called Wisconsin" and the women were super excited!!!! About as excited as I was for Iowa with Chris Soules!!! (*insert eye roll emoji here*)

Insider Tip: If you are ever in an airport and see a group of exceptionally attractive 20-somethings walking around that look like they just came from shooting the movie Taken, you've probably stumbled upon the next group of Bachelor contestants. It's their first time in the real world for weeks and it can be a little jarring coming back to "reality." Also, they will be followed around by people wearing black clothing, large backpacks, and earpieces. So, keep your eyes out.

In Wisconsin, Danielle L. got the one-on-one date, which I can't really remember other than they decorated cookies that looked delicious, and they ate them. Actually seeing people eat on The Bachelor is something like seeing a unicorn. I know they also kissed a lot. She laughed a lot. Oh, and there was an awkward run-in with one of Nicks exes (that he dated for three months... *insert another eye roll emoji here*). Danielle gave her a hug and said it was so great talking to her 'cause she was super nice and had great insight on Nick (*insert a third eye roll emoji*).

The group date this week was a sh*t load of chores on a dairy farm. (See what I did there?) There were lots of poop jokes made while they shoveled poop. I always enjoy a good poop joke. There was also a lot of Corinne "milking" the drama. (I’m beginning to wonder if I am actually watching The Bachelor or a female version of Everybody Hates Chris, except Chris is Corinne.)

Raven also got a one-on-one. She's cute and they played soccer with Nick's little sister Bella (who was a doll, as she always is). Raven met the parents. They went roller skating with Bella and her friends — Nick made a point to show he's a pro — and then they scooted off for a romantic dinner at a museum. It was there, amongst the art, that Raven told Nick she once caught her last boyfriend cheating, broke down his door spider monkey style, saw the woman's vagina, and ruined their night (and probably his life after he hears this on national television). You GO GIRL! (Evan is currently trying to track this man down to publicly shame him.)

Next time I hear this story, I want Carrie Underwood's "Before He Cheats" and Taylor Swift's "Should’ve Said No" playing in the background, please and thank you.

After that, the cocktail party began and ended with a “to be continued” that will pick up next week where Taylor and Corinne's fight left off. Can’t wait to see how that turns out.

Back to what I was saying earlier, why do Nick, and many before him, discount what everyone else is screaming and instead keep sticking with the blatant hijacker of others' screen time? Some will argue that it's because the Bachelor is in cahoots with the producers and he's doing it for the ratings. Others will say... well, actually, I don't think I've heard another excuse. Either way, the way this show is designed, the villain's true character is invariably revealed by this point. Said villain is handed a lot of rope to do whatever they want (like sit on the sidelines while others shovel cow dung), so the antagonists end up screwing themselves by about Episode 5.

For now, Nick's not seeing these fights, and he's not watching Corinne compare herself to sweet buttery corn. He can only go off what time he spends with her and what the contestants say. The unintended result of sacrificing time with Nick to talk about someone else is that it ties you to the story line of that contestant, meaning you'll likely go home before or shortly after they do (like I did after telling JoJo about Chad). And, all this talk actually gives the Bachelor more of a connection point with the villain.

Right now, Nick is dating 15 people, so meaningful connection points are few and far between. When everyone talks about Corinne to Nick, it inadvertently keeps her in the forefront of his brain. It's probably piquing his curiosity. For other Bachelor(ette)s, this kind of thing may draw out the very human attraction to the "bad guy" or the "crazy girl." And, especially for Nick, he was the outsider during Kaitlyn's season, so there's a very real piece of him that has to sympathize. It also helps that Corinne appears to be leading their relationship and that inherently takes the pressure off of him — with others, he's probably still trying to remember names.

The social experiment that is The Bachelor is intended to be a cleansing process. It's not-so-gently scrubbing away the women who aren't ready for marriage or that aren't "right for Nick." Right now, we are smack dab in the middle of the spin cycle. But, just like in real life, no matter what others say about those of us who speak up, the truth will always comes out.