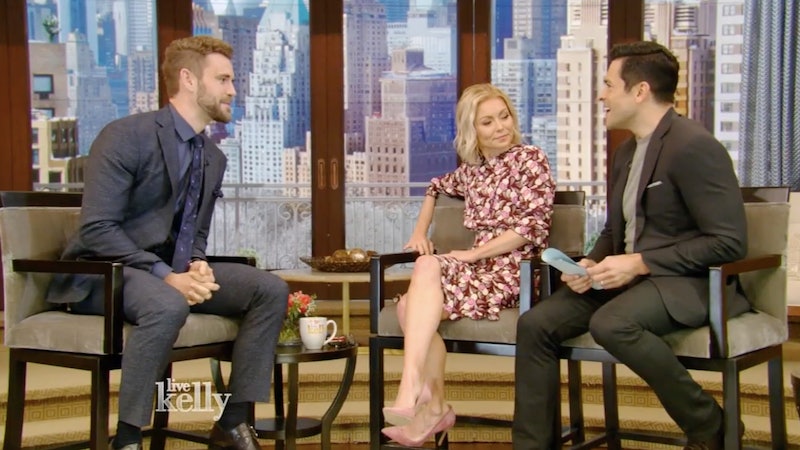 After week six of this season's The Bachelor, things have taken a teary eyed turn. Could it actually be that, after three attempts at finding a spouse on national television, Nick Viall is just meant to be single? That finding a wife just isn't in the stars for our leading man? Nick. Oh, sweet bearded Nick. Kelly Ripa and Mark Conseulos seem to think so, and they have no problem making it known. And you know what? I think Nick should be single after The Bachelor Season 21, too.

On Tuesday's Live! With Kelly, Conseulos told Nick, "I figured it out. You should be single... Look at you. You're a tall, handsome guy. You smell really nice," Conseulos continued. Ripa agreed with his assessment. And, especially after Monday's episode, they might be right. I mean, Danielle L. confessed her love for Nick, only to be stared at in return like she just told him his childhood dog passed away. He sent her packing. Jasmine tried to asphyxiate him. Subsequently, he sent her packing. Whitney, whose presence had gone undetectable until now, was left on an island. Contestants are dropping faster than Corrine can say "Make America Corrine again."

Nick, despite all his strong suits (growing a beard, picking out engagement rings, throwing them in limos, being tall, being physically strong, wearing suits, etc.), has one major, glaring flaw. He cannot, I repeat he cannot, hide his emotions. Nick Viall's Achilles heel will be his inability to put on a poker face. You heard it here first. In my head, Nick Viall is the Jim Halpert of The Bachelor franchise. It's too bad he can't actually look into the camera, mid-date, and shrug.

Though Ripa reduces his current uncertainty down to the "thrill of the hunt" principle, she also introduces another possibility. Maybe it's not actually Nick's fault. Maybe these women just aren't compatible with him. She did point out that among the contestants are a 25 year old with a nanny, a contestant who showed up in a shark/dolphin costume, and women who want to slap and choke him.

"I think that you need to find love outside of TV," Ripa tells Nick, instructing him to go to the bars instead. The hosts both agree that this probably won't end in Nick's favor. "What if it works out?" Nick asks the pair. Oh, but what if it doesn't?

Forget the bars; let's go back to the idea of Nick riding solo. Staying single for a little while longer might do the man some good. Give him some clarity. Infuse some confidence back into him. Let him focus on his modeling career or software sales. Hike the Pacific Crest Trail. Whatever his heart desires.

By the end of week six, Nick has sent three women home before the rose ceremony. He's burst into the contestants' hotel room, with tears in his eyes, and declared that, at any point in time, he could just stop liking each and every one of them. Then, he's burst out of that room and left a group of six woman bewildered on the couch. These are actual events that occurred.

I'm not saying we should be pessimistic about Nick's future or his ability to choose a mate wisely. I'm just saying that, if this ends without an engagement, Nick should take that as a sign that maybe TV isn't the place to find a wife. Not for him, anyway.