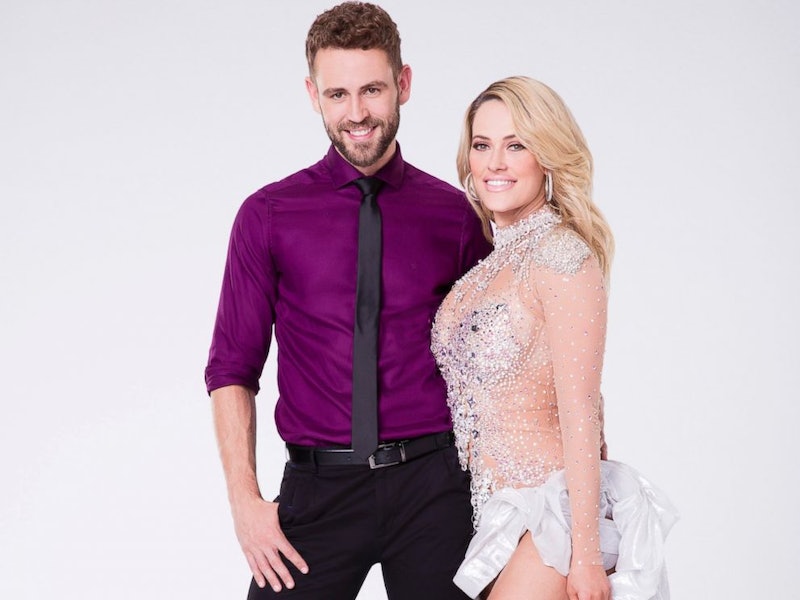 After two Bachelorette seasons, one turn on Bachelor in Paradise, and a stint as the Bachelor, I'm honestly not sure what I would do without Nick Viall on my television. I've gotten so used to seeing him there. Fortunately, I don't have to deal with any such scenario quite yet, because Nick Viall will be on Dancing With The Stars Season 24. The exciting news was confirmed on Good Morning America — though Mike Fleiss had more or less confirmed it a couple of days before — and I, for one, can't wait.

Nick will not be the only Bachelor to hit up the dancing show after (maybe) finding love. Previous DWTS contestants have included the likes of Sean Lowe and Chris Soules, among others. So, he'd be in good company, although none of those guys won the ultimate dancing prize. But, neither of them were very good dancers (Soules once did the shopping cart move on The Bachelor, so, like, he was doomed from the start.) From what I've seen, Nick has a little more rhythm in his body, so that could bode well for an actual shot at the Mirrorball trophy.

However, I hope Nick knows that DWTS could potentially be a strain on his new romance (if he proposes to a Bachelor contestant). Lowe wrote in his memoir, For The Right Reasons, that the stress of finally being a public couple with Catherine in addition to the long practice hours for DWTS made it really hard on their new relationship. Fortunately they made things work in the end, so hopefully Nick and whoever he leaves the show with can too. Either way, I know I'll be tuning in to see Nick put on his dancing shoes and continue his stay in the spotlight. Because, as the Lord of the Rings meme (sort of) states, one does not simply stop being a reality star.

And I wouldn't expect Nick to either.