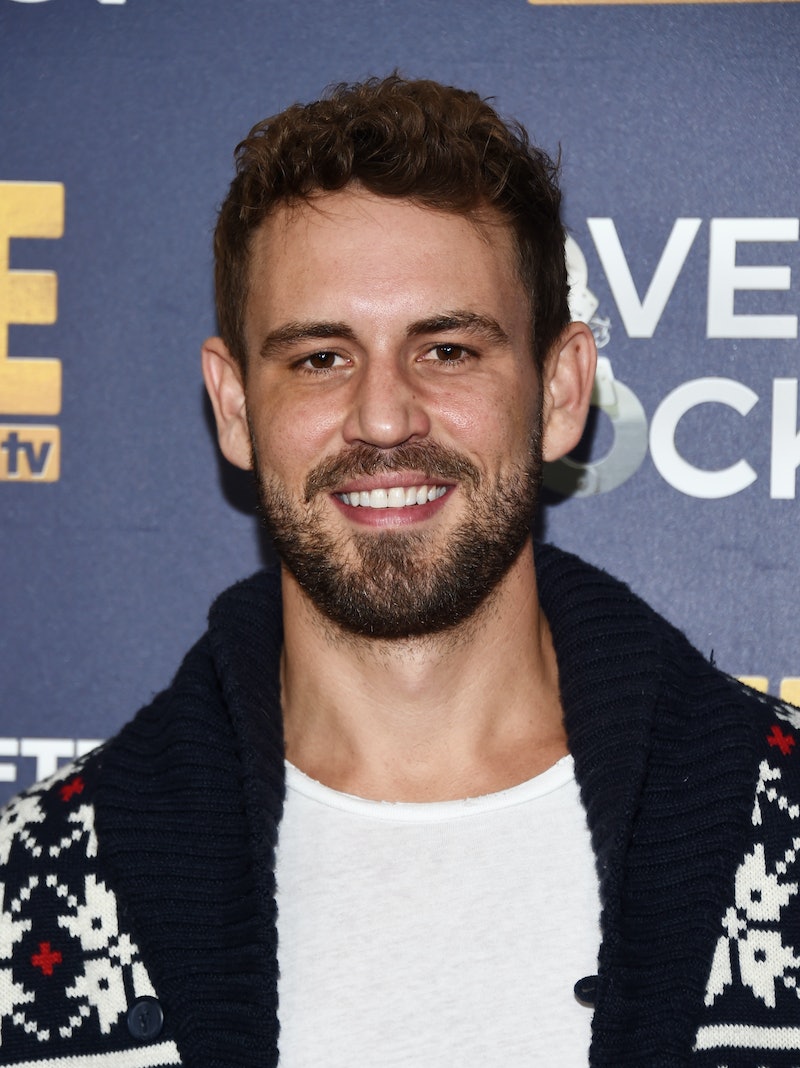 Nick Viall isn't a contestant on The Bachelorette's upcoming season, but you might do a double-take when the show premieres in May. One of Hannah B.'s suitors looks so much like the former Bachelor that even Nick himself couldn't help reacting to his Bachelorette lookalike.

On Tuesday Night, Nick retweeted a message from a fan asking him if he was on stage during The Bachelor's season finale. Hannah met five of the new Bachelorette contestants during the live show. And one of them, Luke S., does look a lot like Nick. The former Bachelor's tweet about the resemblance was short but sweet. He wrote, "Surprise," and added #TheBachelor as a hashtag.

Even Chris Harrison noted the two men's similarities after Luke met Hannah on stage. "Was it just me, or did you guys think it was Nick Viall walking out?" Harrison said to the show's studio audience. "I actually thought it was Nick. I'm like, 'Not again!'"

As for Luke's introduction to Hannah, well, he made things a bit PG-13 during their first conversation. "I don't go down South often," Luke told Hannah, referring to her home state of Alabama. "But for you, I'd go down anytime." It was more than a little awkward, but it definitely made his entrance memorable.

Reality Steve first called out the Nick-Luke similarities when revealing a list of Hannah's Bachelorette contestants. According to the blogger, Luke's last name is Stone. Apparently, Luke is from Washington, D.C., he works as a "fundraising consultant" at a company called Fraioli & Associates, according to his LinkedIn page. Luke seems to be quite a politics buff, too, with D.C.-based internships and an assistant job in the U.S. House of Representatives on his résumé.

Fans were quick to notice the fact that Luke looks like Nick after Tuesday's Bachelor episode, too. It doesn't sound like the two of them have much in common career-wise, but they definitely look like they could be related. "I thought this Luke was Nick Viall coming back for his 10th try," one fan tweeted. "Nick has a twin, and his name is Luke S.," another person wrote.

And if it had been Nick showing up, well, it wouldn't be a total surprise to Bachelor fans. Nick was on two Bachelorette seasons, as well as Bachelor in Paradise, before becoming the Bachelor lead himself. Nick got engaged to Vanessa on his Bachelor season, but the two broke up in August 2017. So there's always the possibility that he really could show up on another Bachelor TV show, even if he's not one of Hannah's suitors this time around.

Hannah's Bachelorette season hasn't even started yet, but fans already know a few of the contestants' names, thanks to their appearance on The Bachelor's finale. And the fact that Luke looks a bit like Nick seems to have eclipsed the conversation about his awkward introduction, which might be for the best. Either way, fans will just have to keep an eye out for any other comparisons when Hannah's season actually airs.