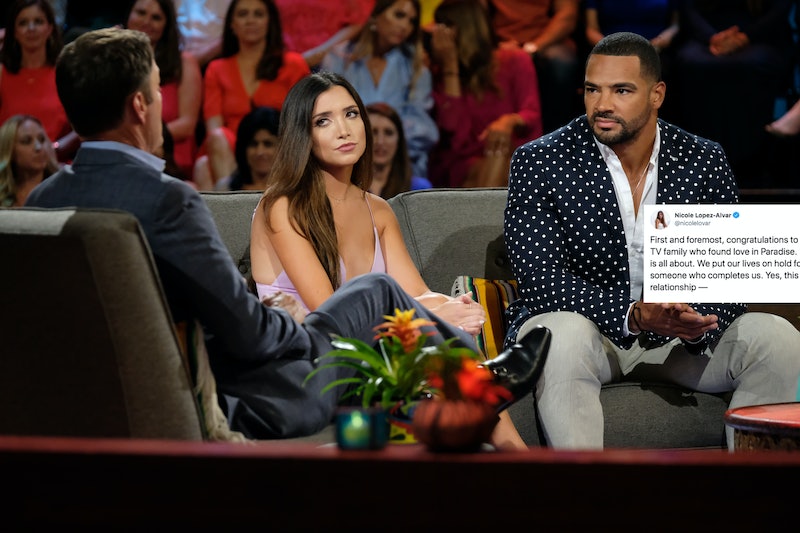 Bachelor Nation was left shell shocked after Nicole and Clay — who seemed to be one of the most committed couples in Paradise — broke up on the beaches of Mexico. While the pair didn't appear on the reunion Tuesday night, Nicole explained her Bachelor in Paradise breakup with Clay on Twitter, even though she didn't get a chance to share what went down on the stage.

Instead of spending the night before "Decision Day" together in the Fantasy Suite, Clay requested that they take some time apart in order to sort through their feelings for one another. The next day, instead of proposing, he told Nicole that he wanted to take things slowly with her — but couldn't tell her that he loved her. In response, a devastated Nicole broke things off with him, declaring that she deserved someone who loved her as much as she loved him. "I love you so much and I care about you so much but I need to do what's best for me," she tearfully told him.

She echoed those sentiments on Twitter, where she made sure to share an "important" message despite not getting to talk about the relationship during the reunion. "This is what Paradise is all about. We put our lives on hold for the chance of finding someone who completes us," Nicole wrote. "Yes, this show accelerates every relationship — but we all embark on this wild, vulnerable, and unconventional journey knowing it’s worth it. True love always is."

She continued, "While there is so much I want to share with you all, there is a message that I need to share that is far more important than me," before encouraging women everywhere to understand their worth.

"Ladies, we don’t have to put up with anything less than wonderful. We are worthy of someone’s complete and all-encompassing respect, time, love, honesty, and energy," Nicole explained in a series of tweets Tuesday night. "When a man’s actions don’t line up with his words, when a man’s promises fall flat, and when a man dares to string you along knowing very well he does not see a future with you — we are better off on our own than loving a man who doesn’t know what he has when he has it."

"I know it’s scary, but sometimes, the bravest thing we can ever do is love ourselves first," she continued. "If that means to run, then run." After noting that she doesn't "regret a single moment" of her experience on Bachelor in Paradise, despite the heartbreak that she endured, Nicole wrapped up her posts with a message addressed directly to her female followers. "Remember — we are ALL worthy of our own happy ending," she wrote. "Whether that be with a partner or not. ‘Cause we’re our own soulmates."

Nicole wasn't the only one who shared her side of the Paradise breakup on Twitter; Clay explained on his own account that while both he and Nicole were at the reunion when it was filmed last month, the Bachelor producers cut their conversation. "Yes, I was at the reunion [but] they chose not to show my convo with Nicole," Clay wrote.

"I basically explained why I didn’t think we were far enough along to get engaged and that I really did want to continue to date and wished her luck with her new relationship," the former football player explained, adding the hashtag "#didntmissmuch." After fellow Bachelor Nation member Ashley Iaconetti noted that it was "so weird" that Nicole and Clay's conversation got cut from the reunion, he also explained that he cancelled a vacation in order to be there, only for their segment to land on the cutting room floor.

While things may not have ended the way Clay and Nicole had hoped when they first signed up to take part in Paradise, it's clear that the experience has taught them a great deal about who they are, and what they really want from a relationship.