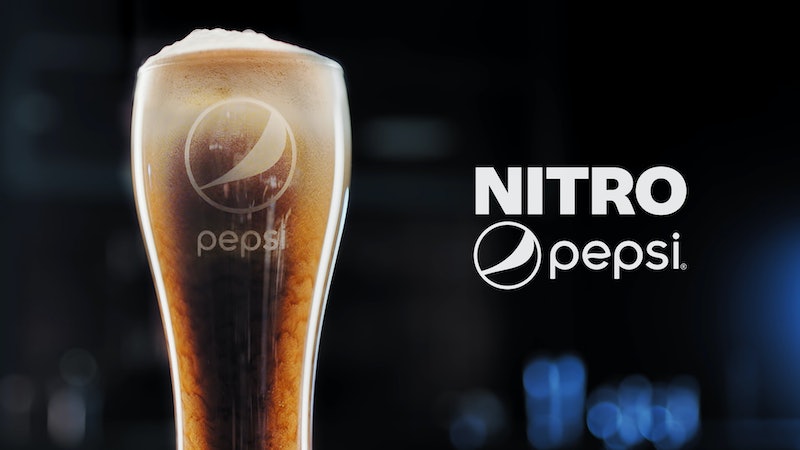 And today in food news I didn’t see coming, we have this: Pepsi is developing a nitrogen-infused cola called Nitro Pepsi. PepsiCo introduced the forthcoming beverage on Thursday, and although details are somewhat scarce right now — we don’t, for example, know when we’ll actually be able to get our hands on the stuff — we do know it’s coming. And soon: If you’re attending the Super Bowl this year, you might be able to give it a taste while you’re cheering on your team of choice.

Like a number of classic cola brands, Pepsi has a long history. The invention of pharmacist Caleb Davis Bradham, the soft drink was first introduced in 1893 as “Brad’s Drink.” Bradham intended the drink, which he sold at his shop in New Bern, North Carolina, Bradham’s Drug Store, to aid in digestion; accordingly, he renamed it “Pepsi-Cola” in 1898 — “Pepsi” having been drawn from “dyspepsia,” or indigestion.

Nitrogen-infused drinks, meanwhile, are a slightly more recent creation. It's true that beer on draft has long been served with the aid of nitrogen; the nitro is what gives it that smooth, velvety mouthfeel. You know Guinness Draught? That’s what I’m talking about — when it was developed in 1959, the pairing of nitrogen and carbon dioxide used to serve it was a novel idea. A widget was later invented that recreates the texture of a nitrogen draft beer in a can.

More recently, we’ve seen nitrogen-infused draft technology applied to other kinds of drinks. Nitro cold brew coffee, for example, which started to become A Thing in either 2012 or 2013, depending on who you talk to. Soda hasn’t really been among the list of newly-nitrogen-infused beverages, though; traditionally, carbon dioxide (CO2) has been used to give soda its bubbles, largely due to the fact that CO2 is more water soluble than nitrogen is.

But Nitro Pepsi, it seems, wants to challenge our expectations — and possibly cement a previously untapped drink category. According a press release provided to Bustle, Nitro Pepsi will have a “creamy and delicious flavor” and a “velvety, cascading foam,” creating a “unique texture and elevated experience, with the familiar cola taste Pepsi fans love.” Two flavors are in development: Signature cola (which I’m assuming is just, y’know, the taste of regular Pepsi) and vanilla. Said Todd Kaplan, Pepsi’s VP of Marketing, in a press release, “With the creation of the world’s first ever nitro-infused cola, we will be able to introduce a creamier, smoother product, reimagining cola in a way that only Pepsi can, to a whole new set of consumers.”

And indeed, although the public hasn’t yet gotten a taste of Nitro Pepsi, it’s likely that it will be quite a unique experience. Nitrogen, you see, creates smaller bubbles than CO2 — that’s why soda carbonated with CO2 often has sort of a sharp mouthfeel, compared to the silky smooth one nitro beer and coffee have. CO2 also doesn’t produce the same sort of creamy foam nitrogen does (as anyone who has ever accidentally shaken up a can of soda before opening can attest). The idea of a cola-flavored drink that has the velvety texture most of us usually associate with craft beers or cold brew is… intriguing, to say the least.

Again, Nitro Pepsi isn’t available to purchase at the present; that information hasn’t been released just yet. But according to the press release, Pepsi will be “sampling the new beverage at select venues and cultural events” — including Super Bowl LIII, which is set to take place in Atlanta, Ga. On Sunday, Feb. 3. So, uh, if you have Super Bowl tickets? Be on the lookout for Nitro Pepsi at the big game.

The rest of us will just have to keep our ears to the ground. Stay tuned!