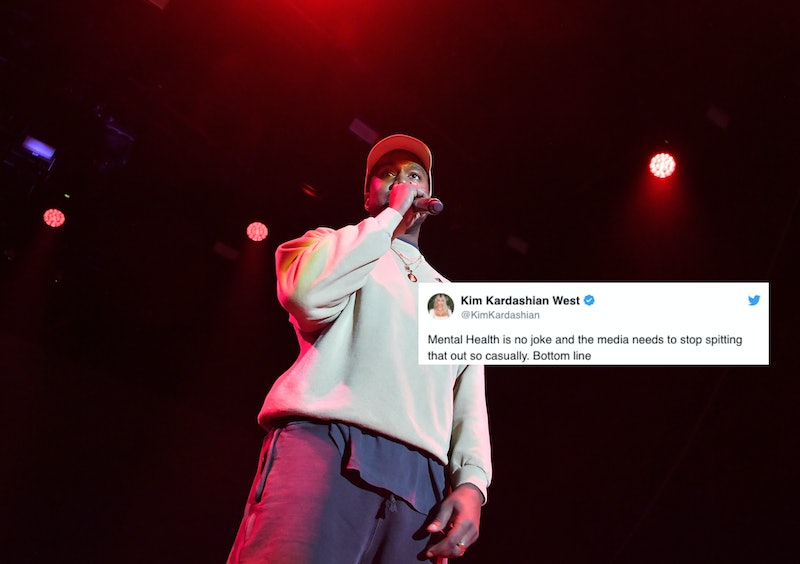 If you've been on Twitter in the past 24 hours, you're aware of the current controversy surrounding rapper Kanye West. In a series of tweets (after being famously absent from the platform), he's announced two new albums and expressed support for President Donald Trump, among dozens of other comments. The messages have left many people confused — this is the man who famously proclaimed that George Bush "doesn't care about Black people" in the wake of Hurricane Katrina, after all. But some are speculating that West's erratic tweeting says something about his mental health — tabloids are quoting unnamed sources that say he's on the verge of a breakdown, and thousands of Twitter users are sharing tweets speculating that he's having a manic episode. It shouldn't have to be said in the year 2018, but speculating about a celebrity's mental health is not OK. Though it may be well-intentioned, or come from a place of concern, it contributes to harmful and damaging stigma about mental illness that affects private citizens and public figures alike.

"In diagnosing a public figure from afar, the purpose is usually not to help them, and in fact may be just the opposite, which is why it is considered unethical," he tells Bustle.

It's not surprising that folks are concerned for West. His erratic tweeting and vocal support for Donald Trump have prompted other celebrities to check on him — John Legend, in a text exchange that West tweeted screenshots of, said "Don't let this be part of your legacy," in reference to West's vocal support of Trump. Kim Kardashian-West defended her husband and said it is "scary" how quickly people have decided that West is mentally ill. "So quick to label him as having mental health issues for just being himself when he has always been expressive is not fair," she said on Twitter.

I have no doubt that a lot of people are acting in good faith and trying to protect a man that they are concerned about, but armchair diagnoses are dangerous. Dismissing West's statements by saying he is experiencing mania is problematic, even if you're trying to 'defend' him.

Board-certified psychiatrist Steven Levine, M.D., founder and CEO of Actify Neurotherapies, also tells Bustle it's dangerous to make assumptions about West's mental health. "To casually diagnose someone with a mental illness because his behavior is unusual or unpopular threatens to drive those truly suffering away from the help they need," he tells Bustle, "and numb their friends and family to reacting appropriately to a serious condition."

Levine likens this to people saying, "I'm so depressed" when they don't have clinical depression — "bipolar" and "manic" can be similarly misused. "These terms themselves have become watered down to describe non-medical states of having a volatile, dramatic, or combative personality," he says.

When mental illness is used as an insult or a way to dismiss behavior, it furthers the stigma that people who live with mental illness face. Hutton tells Bustle that in West's case, the speculation could harm people with bipolar disorder, who may feel defective or isolated after reading the comments people are making. "When people make an armchair diagnosis of someone in a tweet, on social media or some other way, they are using a label to define that person," he says. "The trouble with labels are they become dehumanizing." When you refrain from comments on West's mental health, you're letting the people with mental illness in your life know that you take their diagnoses seriously.