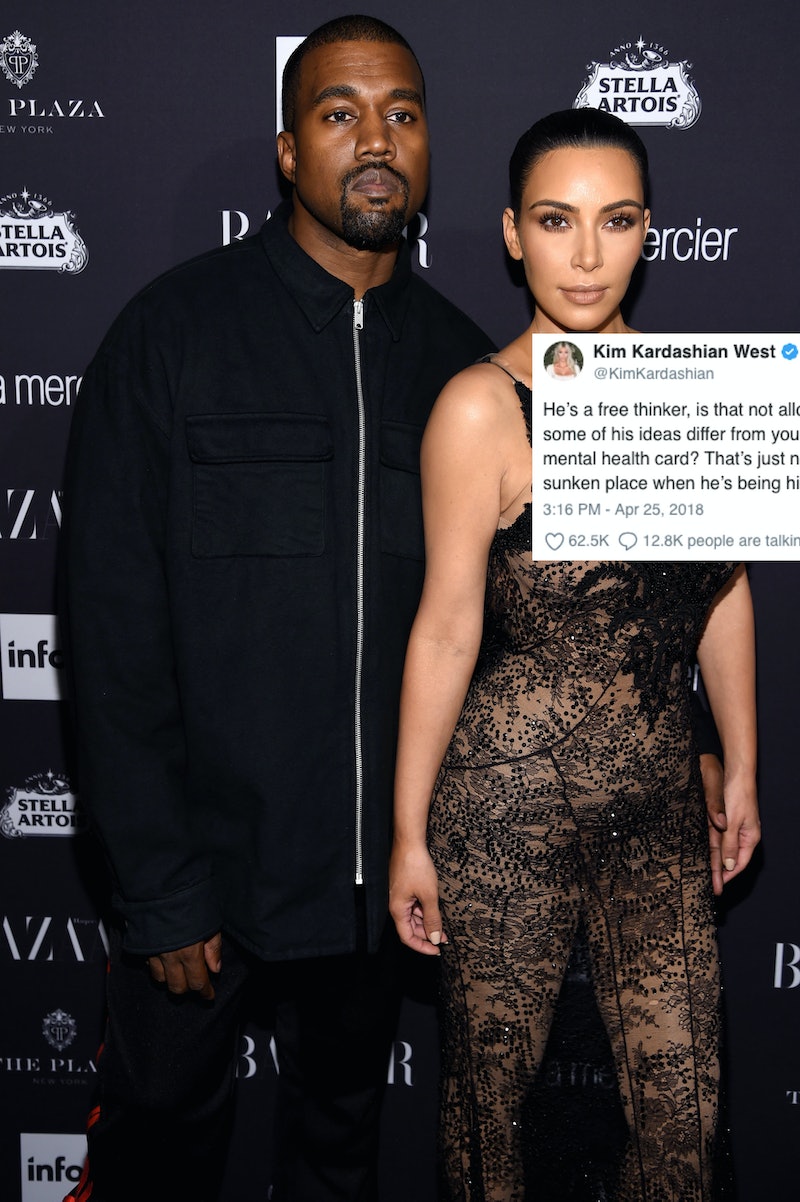 Kanye West can't help himself and he is once again making waves across Twitter. And now, Kim Kardashian is defending Kanye West for what he's been recently tweeting. She took to Twitter Wednesday and shared some lengthy tweets in defense of her husband's words that many haven't taken kindly to. The rapper posted tweets about a variety of topics Wednesday (and has been doing so since returning to Twitter on April 13), but there is one topic that stands out the most — his continued support for President Donald Trump. Trump even responded by calling West's "love" for him "very cool".

"To the media trying to demonize my husband let me just say this... your commentary on Kanye being erratic & his tweets being disturbing is actually scary," her first tweet reads. "So quick to label him as having mental health issues for just being himself when he has always been expressive is not fair."

Soon after West began tweeting up a storm, there were many headlines discussing his reported mental health issues. For example, The Blast reported Wednesday, "Those closest to Kanye West believe his mental health may be in serious jeopardy and are pointing to an outburst during a recent studio session as a major red flag." OK! magazine published the following headline Tuesday: "New Concerns For Kanye West's Mental Health After Outburst in Studio". And Radar Online reported that a source said the following on Monday about Kardashian and West: "Not only does she hate the fact that he is stealing her spotlight, but she and her family feel like he is coming unhinged again and that he may be going through another mental meltdown."

Well, the Keeping Up With the Kardashians star is sick of the reports as she's expressed passionately.

"Yesterday it was announced that Kanye had parted ways with some business people and media outlets made this about Kanye’s mental health. Rather than just a simple business decision," she wrote. "So I’m glad he tweeted about the state of his company and all of the exciting things happening."

She continued, and said how she loves that West is a "free thinker" and asked since when is that not OK in the United States of America? "Because some of his ideas differ from yours you have to throw in the mental health card?" she questioned. "That’s just not fair. He’s actually out of the sunken place when he’s being himself which is very expressive."

She also commented on his tweet about Trump. Unlike the Yeezy designer, Kardashian does not "love" the current president. The Selfish author tweeted, "Now when he spoke out about Trump... Most people (including myself) have very different feelings & opinions about this. But this is HIS opinion. I believe in people being able to have their own opinions, even if really different from mine He never said he agrees with his politics."

Kardashian then made one final point about mental health. She wrote, "Mental Health is no joke and the media needs to stop spitting that out so casually. Bottom line".

As for West, he tweeted TMZ's Harvey Levin directly on Wednesday morning, after the outlet posted an article with sources saying the rapper is acting "erratic". West tweeted, "Harvey Levin of TMZ your [sic] hearing from your future president. Let's be friends. Please never use the word erratic to describe a person who is economically and psychologically empowered."

He also took a jab at People, which published reports Tuesday claiming West has had "explosive fights" with Kardashian and Kris Jenner and that he "seems to be on the edge". "People magazine," he wrote. "Watch how you speak my name. You would love a pair of Yeezys. Don't play yourself." Jenner also responded to both of those reports. Regarding the first, she said, "Lies,Lies,Lies". As for the second, she tweeted, "Nope...not true!"

In November 2016, West was hospitalized for exhaustion, as confirmed by his rep. He also canceled the remainder of his Saint Pablo tour. At the time of West's hospitalization, there were many reports about his mental health. Lady Gaga even came to West's defense, similar to how Kardashian is doing now, in order to enlighten anyone who may not be taking him and his health seriously. "It's not funny to joke about anyone's possible or not possible mental illness, this is a sensitive time for many," she tweeted. "Let's be kind & loving."

West is known for his ego and saying whatever he's thinking, when he thinks it, so his tweets really aren't shocking — and neither is the response to them. However, Kardashian has clearly had enough and will speak her mind when it comes to defending her husband, even if she's stirring up more controversy in her wake.