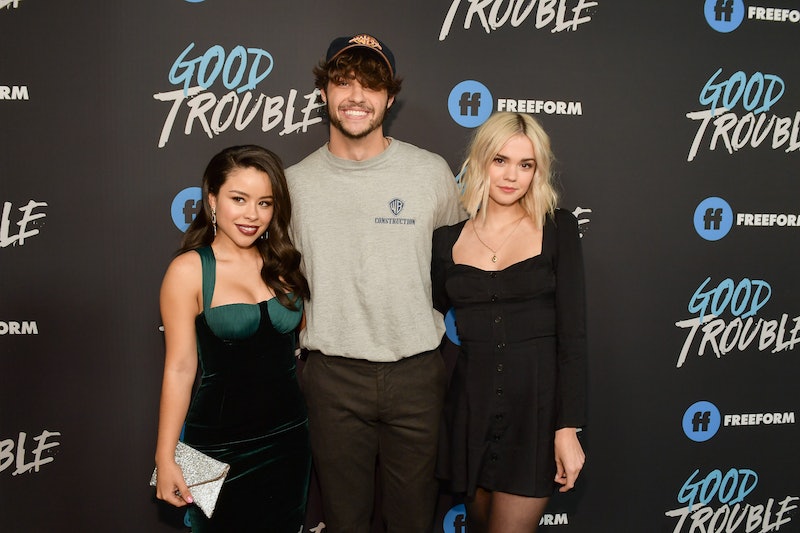 Jesus is finally coming to the City of Angels. That's right, the Good Trouble episode with Noah Centineo is but days away — officially premiering on Freeform this Tuesday, Feb. 26 at 8 p.m. ET. To stoke fans' excitement, the network even teased the actor's appearance on The Fosters' freshman Los-Angeles-set spinoff in a Feb. 19 Twitter video, which they captioned, "Here comes Noah."

In the clip, the actor, who originally played the role of Jesus on The Fosters from 2015 to 2018, is seen reuniting with his sisters Mariana (Cierra Ramirez) and Callie (Maia Mitchell), with the latter apologizing for having to work all day but wanting to grab dinner with her bro before he leaves town. "Um, I actually made plans with that girl I met the other night," he informs Callie during the scene. Oh, and he also conveniently asked the said mystery woman to meet him just then, too. Only when Callie turns around to face Jesus' dinner date, she's not a stranger at all: It's none other than her coworker Becca (Molly McCook). Insert ominous music here.

According to Freeform's official synopsis of "Byte Club," Callie and Becca will likely have already butt heads earlier in the episode:

"Mariana forms a women-in-tech “fight club” with other women in her office to deal with sexism in their workplace. Meanwhile, despite bonding over past traumas, Callie & Rebecca don’t see eye-to-eye on how to address a potential workplace harassment situation for a colleague." (While Centineo was listed as a "special guest star," his role in the plot largely remains a mystery.)

Of course other Fosters cast members, including Teri Polo, Sherri Saum, Hayden Byerly, and Beau Mirchoff, have already made cameos on the Freeform spinoff, which is set five years in the future and premiered in January. However, this will be the first time fans get to spend a good chuck of time with the actor, who shot to superstardom as heartthrob Peter Kavinsky in Netflix's To All The Boys I've Loved Before adaptation, reprising his role. That's not to say his guest spot hasn't been long and hotly anticipated by his loyal stans though.

"We absolutely have plans for an arc with Jesus," Good Trouble executive producer Joanna Johnson revealed to TV Guide in July. The following month, the show's official Instagram account even posted a photo of Centineo with Ramirez and Mitchell on Aug. 22 writing, "No need to Google his whereabouts. The internet’s new boyfriend is currently on the set of #GoodTrouble." Oh, and if that wasn't teasing enough, Entertainment Weekly unveiled a shirtless first-look photo of Centineo in early January — just less than two months before the episode is slated to air. The torture!

As for what fans can expect when Jesus teams back up with his siblings, Ramirez had some small hints on what her onscreen twin may be up to. "Jesus, I don't want to give too much away, but he's definitely in a new place in life and everyone is very grown up and kind of becoming their own humans," she told Entertainment Tonight in a December interview. "But he's always going to come in and stir something up just because they are twins and they are always fighting. But he's the only one that can actually get away with all of that. A lot of times Mariana needs to be told all these things and it can come off as very harsh, but when it's her twin brother, he can easily get away with it. He brings her back down to earth."

"What can't he do?" will surely be the question on fans' minds when they tune in to see Centineo long-awaited arc on Good Trouble next week.