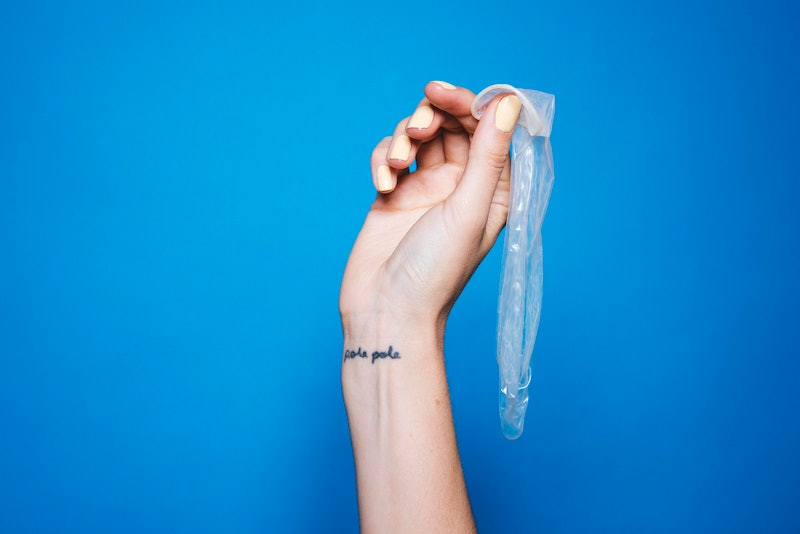 When it comes to STI protection, you can’t really beat condoms. If used correctly and consistently, latex condoms are “highly effective” at blocking the HIV virus, according to the CDC. They’re also good for blocking any other STI that’s transmitted via “genital secretions” — also known as any kind of wet stuff that comes out of your genitals, like ejaculate or lubrication — like gonorrhea, chlamydia, and trichomoniasis. They’re not as good at blocking skin-to-skin STIs, mainly because they don’t cover the whole genital area, but they still provide some protection from those as well. Yup, latex condoms are great — but some people are allergic to latex.

According to the CDC, about one to six percent of the general population has a latex allergy, while eight to 12 percent of health care workers — who are regularly exposed to latex — also have a latex allergy. The symptoms usually include itching, rash, hives, and redness, as well as a runny nose, sneezing, itchy eyes, and asthma. In really severe cases, people can even go into shock.

Doesn’t sound very nice, does it? A latex allergy is annoying at best, life-threatening at worse. (However, “latex allergy” might be a bit of a misnomer because it turns out that people aren’t actually allergic to the latex but rather to plant proteins that the latex picks up when it’s being harvested from the rubber tree.) But just because you have a latex allergy doesn’t mean you can’t have safer sex. Here are three types of non-latex condoms that protect against STIs — and one that absolutely doesn’t.

Your first option if you have a latex allergy is polyurethane condoms. Polyurethane is a type of plastic, so no worries about latex plant proteins setting off a rash. Polyurethane condoms tend to have a looser fit than latex condoms, so they’re a great option for people who feel constricted by traditional condoms. However, they might fit a bit more loosely for other people and there are some reports that they break more easily than latex condoms.

Other advantages of polyurethane condoms include the fact that they’re thinner than latex, providing more sensation during sex, and they heat up more naturally than latex condoms do. They’re also usually a little more expensive than latex condoms, but not by a massive amount. (Think like a dollar more for a pack of three.)

Some polyurethane condoms to try:

Polyisoprene is actually latex, but it’s created in a clean lab environment, where all the plant proteins are removed. People with really severe latex allergies should probably stay away from polyisoprene, but everyone else should be good. They’re not quite as thin as regular latex condoms (latex can get down to 0.04mm, while polyisoprene only goes to 0.06mm) and, like latex, they can’t be used with oil-based lube. Some people report that these fit better than regular latex condoms. Ultimately, the differences between polyisoprene and regular latex are so small that they’re a good alternative for people who want to use latex condoms, but can’t because of an allergy.

Some polyisoprene condom brands include:

The internal condom (commonly called a “female condom” but it can be used by people of any gender) is made of a synthetic rubber called nitrile, which warms up nicely and is great for people with latex allergies. While the external condom goes on the outside of the penis, the internal condom is inserted into the vagina or anus and it stays there throughout intercourse. Internal condoms provide greater protection from transmission of skin-to-skin, because they cover more of the vulva than external condoms do. They learning curve can feel a little bit steep for people figuring out how to use them the first time, but they’re popular with people have latex allergies, who don’t fit well into external condoms, people who have group sex, and for anal sex.

Currently, the only nitrile internal condom in the market is the FC2.

But Don't Use Lambskin Condoms

Lambskin condoms (or “natural condoms”) are often suggested for people who have latex allergies. As the name suggests, they’re literally made out of lambskin — the intestine, to be exact — and they do provide protection against pregnancy. They don’t, however, provide protection against STIs. That’s because, according to the CDC, the pores in a lambskin condom are up to 1,500nm in diameter. That’s small enough to block any sperm that are trying to get through, but 10 times wider than HIV and 25 times wider than Hepatitis B. So if you’re with a fluid-bonded partner and you’re just trying to prevent pregnancy, this could be a good option. Otherwise, stick to one of the three listed above.