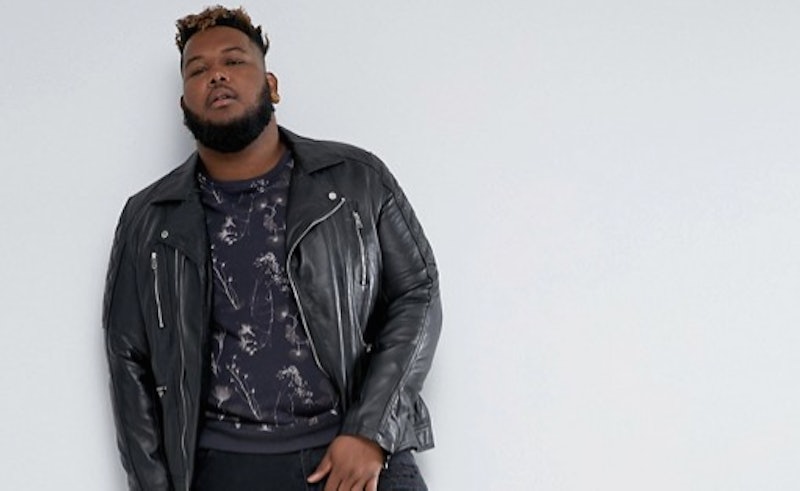 Another day, another clothing brand coming under fire for controversial marketing. One minute a brand is accused of cultural appropriation and the next, one is being called out for projecting "racist" tones in its clothing and images. Now ASOS has Twitter in a frenzy for stocking a brand with a questionable name — Noose & Monkey.

Update: ASOS tells Bustle, “We are very sorry this brand name has caused offense. We are removing it from our site immediately and will work with their team to address the naming issue.”

ASOS, a retailer with a history of partnering with an LGBTQ organization for a collection that celebrates identity and featuring models with stretch marks, seems to embrace people from all walks of life. But fans say carrying a brand whose name consists of words that have racist roots for the black community doesn't fall in line with their generally all-inclusive efforts.

Plus, the line is featured on a black model.

The negative connotations associated with the word "monkey" date back decades. Having long been used as a racial slur for the black community, the term dehumanizes people of color.

The association between black people and simians may be explained by "the psychic impact of hundreds of years of racial slavery in modernity, which stamped ‘Negroes’ as permanent sub-persons, natural slaves, in global consciousness," a Huffington Post column noted.

As symbols of racial terrorism, nooses have equally detrimental connotations. An execution method often used at the expense of minorities, the noose "became a stand-in for vigilantism, for murder by community, an unveiled threat and a symbol to brandish to keep blacks, especially, 'in their place'", the Los Angeles Times once pointed out.

With such racially charged words, Twitter users are wondering why a retailer would choose to combine two ominous terms to create a brand name.

Offering an explanation on its website's "about us" page, Noose & Monkey states the name was birthed from an incident involving the French during the Napoleonic wars.

"Noose & Monkey is a story of mistaken identity and disguise," the statement reads. "During the Napoleonic wars, the crew of a French naval vessel dressed their pet monkey in an officers uniform. After being shipwrecked off Hartlepool, the monkey was discovered on the beach. The locals, assuming he was a Frenchman and therefore an enemy spy, interrogated and eventually hung him in the town square," the post continues.

It's worth pointing out that Noose & Monkey says the story has now become folklore in Hartlepool, England. So there is no evidence that the bizarre event actually happened, according to the BBC.

Bustle reached out to ASOS and Noose & Monkey for comment. Noose & Monkey told Bustle, "Ultimately, the monkey was hung because of what it was wearing, and our founder wanted this irony to be a key element in the creation of an innovative and forward-thinking tailoring brand. We are sorry if the name of the brand causes any offense... There are no racial over or undertones here. Just great looking clothing."

The statement adds that "the brand name was not an easy choice" by their founder, while detailing the Hartlepool story posted on the retailer's website.

ASOS also responded to backlash on Twitter, mentioning its specialist team is looking into the matter.

Many people aren't buying the folklore story, though.

Many are saying they will boycott ASOS if it doesn't stop carrying the brand, similar to when Twitter users promised to stop shopping H&M when the retailer marketed a "racist" kid's sweatshirt.

Some people think the brand should seriously reconsider the name.

ASOS is on the receiving end of the backlash just as much as Noose & Monkey, given that they stock the brand.

Only time will tell if the uproar will cause ASOS to take drastic measures by pulling Noose & Monkey from their inventory permanently.