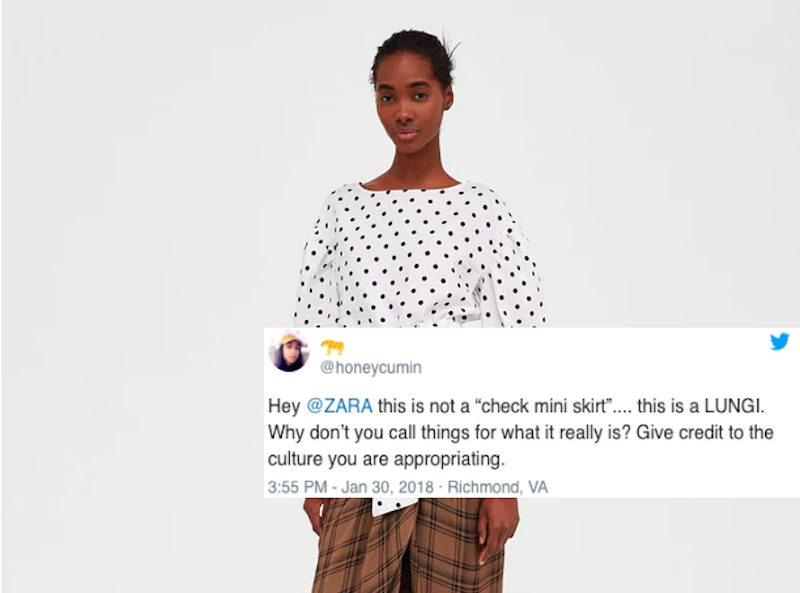 The fast and affordable fashion industries have seemed to erupt in controversy as of late. Now, there's another outcry happening, and it centers on popular fast fashion brand Zara and a plaid skirt.

Twitter users have taken to the platform to express their dismay regarding a skirt that's up for sale on the Zara website. The skirt, called the Check Mini Skirt, is the point of contention, according to Cosmopolitan, and people on Twitter certainly aren't pleased at the similarities between the design and the South Asian lungi.

Twitter users are pointing out that the lungi is a typical style of dress in many South Asian countries, and the issue with Zara's skirt appears to be twofold. First, it's Zara's lack of mention that the design may have been inspired by the traditional skirt. Secondly, it's the fact that the lungi is typically an affordable piece of clothing in these countries, yet the price of the skirt on Zara's site is $89.90.

The overall responses to the skirt, however, appear to range from comical commentary on Zara attempting to make money off a traditional style that is worn mostly by older generations (according to South Asian Twitter users) to serious issues taken with their lack of cultural acknowledgement.

Twitter users are making a point to credit the skirt's design to South Asian tradition and making the assertion that having more people of color in leadership position within business could have prevented this.

Others are seriously upset that no credit was given to the culture that inspired the skirt.

That reaction, however, appears to be mixed with laughter as according to Twitter, the lungi doesn't appear to be considering exactly fashionable.

Others, however, don't seem to find the recreation of the lungi as a "check mini skirt" to be quite as funny.

Some Twitter users pointed out that if a brand was going to recreate a piece of traditional clothing, the profits should go to the people who created it. After all, fast fashion brands, like Zara, are often criticized for their production ethics.

Overall, however, the sentiment appears to be that charging $89.90 for a skirt that is seemingly both extremely affordable in its country of origin and worn by older generations has most people laughing.

The price really has people baffled.

Some are simply laughing it off.

Others just seem embarrassed for Zara.

This isn't the first time that Zara has been criticized for a design, though. Back in 2014, the brand pulled a children's shirt from shelves because of striking similarities to uniforms worn by Jewish prisoners during the Holocaust.

The brand did apologize for the design after criticism on Twitter mounted.

Zara, however, is certainly not the only brand to be accused of insensitivity, though. Only recently, H&M was harshly critiqued online after launching a children's sweatshirt with the phrase "Coolest Monkey in the Jungle" on the front and having a black child model it on their website.

The internet was quickly up in arms alleging racist intentions by having the black child model the sweatshirt.

Ultimately, H&M did pull the sweatshirt and the imagery from their website. The brand cited overlooked protocol as the reason behind the hoodie begin up for sale, but did ultimately agree with what angry fans had asserted about the garment.

The allegations of cultural appropriation against Zara and racism within H&M show that customers are keeping an eye on big brands. Twitter users are swift to call-out appropriation and racism, and based on H&M's response, these same brands do seem to be paying attention to social media.

As of press time, Zara has not responded to Bustle's request for comment.