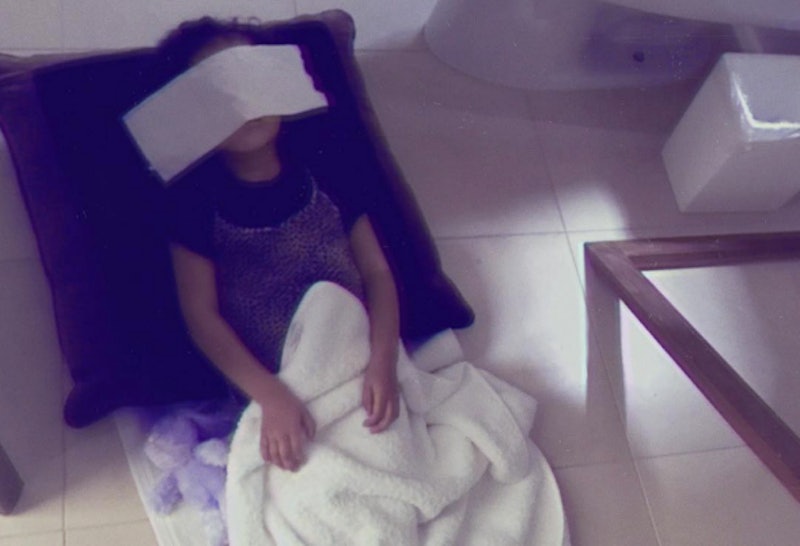 Up until now, you probably know North West as the trendy, well dressed child of Kim Kardashian. At just four years old, she's sat front row at fashion week and even received a set of custom Balmain jackets, but now she's proving that she has the attitude to back it up. According to Kardashian's Instagram post, North West turned her time out into a spa day, which might just be the best kid move ever. Ah, to be a young Kardashian!

I always wondered what it would be like to be the child of a celebrity. Sure, they get the best clothes and best toys, but they also have the best attitudes. North West's latest kid move is proof of that. Instead of going to her room for a time-out, she gave herself a spa day instead. Because, you know, when your mom tells you to chill out, that's probably the first thing you think of too. The relaxation session was complete with a fluffy pillow, towel, and, of course, some toilet paper to go over her eyes.

"That time North gets a time out & is a little too quiet...," Kardashian's Instagram caption reads. "I go in her room to check on her & she's in the bathroom, made her own spa & tells me she's chilling out."

If that's not the most adorable thing you've ever seen, then I don't know what is. Personally, I love that she brought her purple bunny to her spa day with her. North has had a lot of adorable photo ops in her day, but this might just be the best one yet. Honestly, this is probably way better for the braid than staring at a wall for five minutes, like my time-out was like when I was a kid.

This isn't the only grown-up moment she's had recently, either. According to another one of Kardashian's Instagram posts, it looks like North has had some input in her parent's new kids clothing line too. She's seen in the photo sporting some of the items and working on mood boards. I don't know why she doesn't have her own social media page already, because these moments are too good.

Parenting tip: if your kid quietly goes and has her own at-home spa day, you're probably doing something right. You never know what West will do next, but one thing's for sure — it will be adorable!