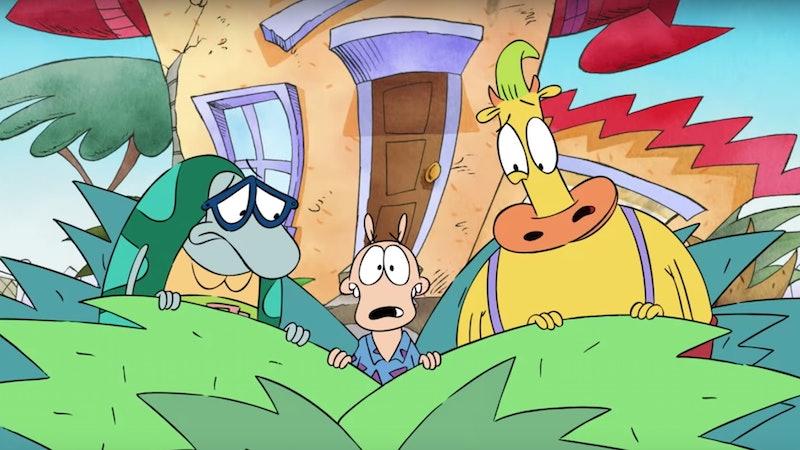 Summer is a time all about creating new memories — and possibly reliving a few of your favorites through everything from s'mores-filled campouts to cheesy movie marathons. This summer, however, '90s kids everywhere will turn their attention to streaming services, as all of the nostalgic movies and TV shows coming to Netflix in August will surely bring all of their most idyllic childhood memories back with their slate of programming.

First up, Aug. 1 will bring the unforgettable coming of age movie Now & Again to Netflix, featuring every '90s kid's spunky and sassy role model, Christina Ricci. If romantic comedies are more your speed, early-aughts pop star Christina Milian has got your back, with her new movie, Fall Inn Love, about a woman who moves to New Zealand after a bad breakup and fixes up an inn — and her heart — with the help of a hunky contractor.

Of course, that's nothing compared to the amount of nostalgia-influenced Netflix originals headed to our screens in August; from a trippy revival of The Dark Crystal to the brand new adventures of Invader Zim, at the start of the month, Netflix will basically turn into the TV channel you always dreamed of as a child.

Here's all of the nostalgic movies headed to Netflix this August:

Relive all of the exhilarating highs and awkward lows of adolescence with this 1995 coming of age classic, starring Demi Moore, Rosie O'Donnell, Christina Ricci and Thora Birch. Plus, now that its target audience are adults, the movie's rose-tinted nostalgia for the summer of the characters' youth will hit even harder.

After you've fallen head over heels in love with Kaling's take on the 1994 British rom com, relive the original charm of Four Weddings on Netflix. After all, you'll probably need to start debating your BFFs over whether Hugh Grant or Nikesh Patel is the dreamier rom com boyfriend.

More than 20 years after everyone's favorite anxious wallaby left Nickelodeon, Rocko's Modern Life will finally return to screens with a brand new movie — and it seems as if Rocko has changed with the times. "After 20 years in space, Rocko returns to a technologically advanced O-Town and makes it his mission to get his favorite show back on the air," the official synopsis teases.

The aughts-era cartoon — which followed a megalomaniacal alien who invaded Earth in order to enslave the human race — returns to our screens after decades away, and Enter the Florpus promises to be just as bizarre and hilarious as ever. "ZIM discovers his almighty leaders have no intention of coming to Earth and he loses confidence in his own amazingness for the first time in his amazing life, which is the big break his human nemesis Dib has been waiting for," IGN described of the trailer, which premiered at San Diego Comic Con in July.

Jim Henson's trippy world returns to the screen with a brand new cast of A-List actors — including Awkwafina, Game of Thrones stars Lena Headey and Nathalie Emmanuel, Mark Hamill, Taron Egerton and Keegan-Michael Key — as three Gelflings attempt to protect their world from the darkness.

Whether you want to relive the most exciting summer of your youth or simply want to escape to the magical world you've always wished to live in, Netflix has plenty of nostalgic offerings headed to the streaming service this August.