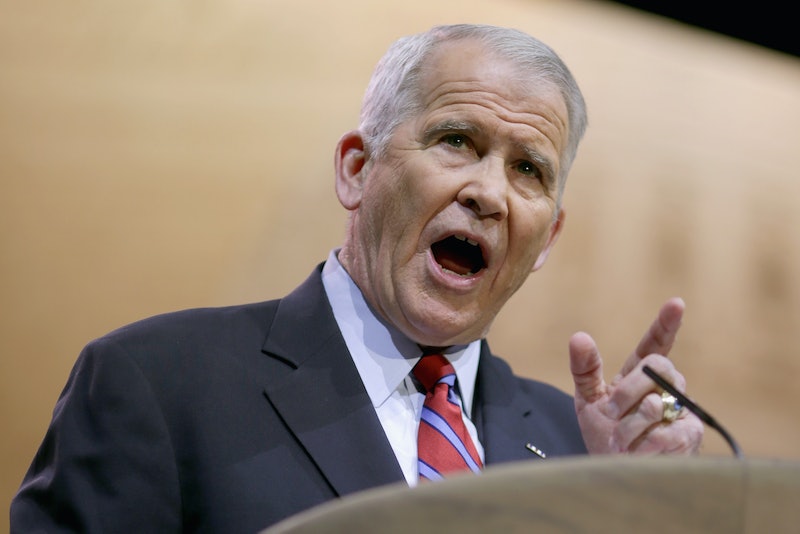 In a video released on Monday, NRA president Oliver North weighed in on the sexual assault allegations recently made against Supreme Court nominee Brett Kavanaugh, both of which he has flatly denied. According to the NRA president, Kavanaugh's support for the Second Amendment is the reason why he is facing allegations from two different women.

North referred to a number of specific Democrats in the video clip, but his main point suggested that the party was drumming up allegations against Kavanaugh as a way to subvert the constitutionally protected right to bear arms. "A woman who wants to confiscate your firearms leaks an unsubstantiated accusation to smear a man because he believes in our Second Amendment," North said. He continued:

Politicians call a privileged senator who killed a woman, a lion, and now they smear Brett Kavanaugh as a threat to women. Since the election of Donald Trump, the character assassination of good Americans like Brett Kavanaugh by those with half his intellect and a fraction of his virtue, has been unconscionable.

North's dramatic monologue contended that any current attempts to stymie Kavanaugh's confirmation to the Supreme Court represent a malicious effort to undercut sacrifices made to protect the Second Amendment and its significance to the United States.

"I didn't hold dying Marines in my arms defending freedom so corrupt politicians could disgrace their heroic sacrifice," he said in the video. "We the people denounce their character assassination, their hypocrisy, their lies. And we proudly stand with Brett Kavanaugh. And we the people, will bring dignity back to our democratic process."

The two allegations against Kavanaugh were publicly released within one week of each other. One woman, Christine Blasey Ford, claimed via The Washington Post that Kavanaugh sexually assaulted her while the pair were at a party back in high school. Ford told The Post that she was 15 years old at the time and that Kavanaugh was 17. Kavanaugh has repeatedly denied the allegations.

"This is a completely false allegation. I have never done anything like what the accuser describes — to her or to anyone," Kavanaugh said in a statement.

The second allegation was published on Sunday evening, one week after The Post report. This allegation came from a woman named Deborah Ramirez, who alleged via The New Yorker that Kavanaugh sexually assaulted her while the two were students at Yale University. Ramirez claims that Kavanaugh exposed himself and put his penis in her face after participating in a group drinking game, and that he did so while other people were in the room.

Ramirez alleges that she accidentally touched Kavanaugh's penis when she went to push him away. She described feeling embarrassed, in part because she says she was a devout Catholic who had no intention of touching a penis until she was married.

In a statement to The New Yorker, Kavanaugh denied the accusation. "This alleged event from 35 years ago did not happen," he said. "The people who knew me then know that this did not happen, and have said so. This is a smear, plain and simple."

Thus far, no one involved in the allegations has mentioned the Second Amendment. It's not immediately clear why North believes these allegations are related to gun rights in the United States, though his video suggests he strongly believes that they are.